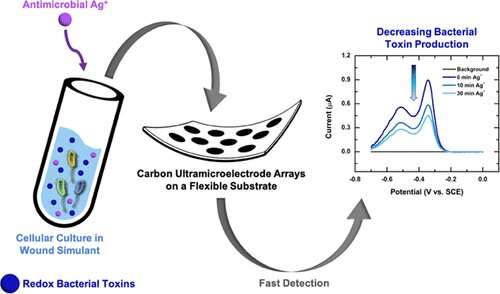 Researchers from Skoltech and the University of Texas at Austin have presented a proof-of-concept for a wearable sensor that can track healing in sores, ulcers, and other kinds of chronic skin wounds, even without the need to remove the bandages. The paper was published in the journal ACS Sensors.

Chronic wounds that fail to heal quickly, such as diabetic foot ulcers or pressure ulcers, can be very tricky to manage for healthcare professionals and a nightmare for patients. To monitor the healing process and assess the need for treatment, doctors and nurses normally need to remove the bandages from a wound, which damages the recovering tissue, often hurts the patient, and requires hospital visits, particularly to avoid further infections. Furthermore, if a wound requires more than just visual inspection, other available methods include tissue biopsies, surface swabs, or testing for pathogens—invasive and costly procedures that can take days and yet fail to produce useful treatment directions.

That is why ‘smart’ bandages, essentially wearable sensors that can monitor certain biomarkers during the healing process, have captured the attention of medical engineers. In the new study, the Russia-US team, led by Skoltech provost, Professor Keith Stevenson, explored electroanalytical methods that, thanks to their relative simplicity, sensitivity, durability, and other attractive characteristics, are particularly promising for clinical applications.

For the new study, the researchers built an early prototype of an electroanalytical wound sensor based on carbon ultra- microelectrode arrays (CUAs) on flexible substrates. In previous studies, this sensor had been placed on quartz substrates, but to ensure flexibility, the authors developed a method of putting the arrays on a polyethylene terephthalate (PET) substrate.

The team used a simulated wound environment to test the sensitivity of their sensor to three critical biomarkers: pyocyanin, produced by Pseudomonas aeruginosa, a bacterium typically colonizing chronic wounds; nitric oxide (NO) secreted in response to bacterial infections by cells of the immune system; and uric acid, a metabolite which strongly correlates with the severity of a wound. All these compounds are electroactive: that is, they respond to electrical activity and thus can be detected by an electroanalytical sensor.

Testing showed that both the sensor’s limits of detection and linear dynamic ranges, which represent the ranges of concentrations where a sensor produces meaningful quantitative results, were within the biologically relevant concentrations—that means a device based on these sensors could be used for wound monitoring in a clinical setting. The researchers also tested their sensor in cell cultures, where it successfully detected pyocyanin from P. aeruginosa and NO from macrophages (immune cells that destroy bacteria and other ‘invaders’). Finally, the sensor was also able to detect the influence of Ag+ silver ions, a known antimicrobial agent, that suppressed pyocyanin production by the bacteria.