Watch the ‘beautiful moment’ girl, 1, who was born deaf, lights up when she hears her mother say ‘I love you’ for the first time

This is the heartwarming moment a deaf toddler’s eyes light up and her mouth drops opens as she hears her mother say ‘I love you’ for the first time.

A’Deja Rivers, 15 months, from Arcadia, Florida, has been deaf since birth.

Video captured the moment on June 20 when the implants were turned on as A’Deja sat on the lap of her mother, Patricia Shaw.

Her eyes widen as she hears toys rattle, cymbals bang together and Shaw’s voice for the first time saying: ‘I love you.’ 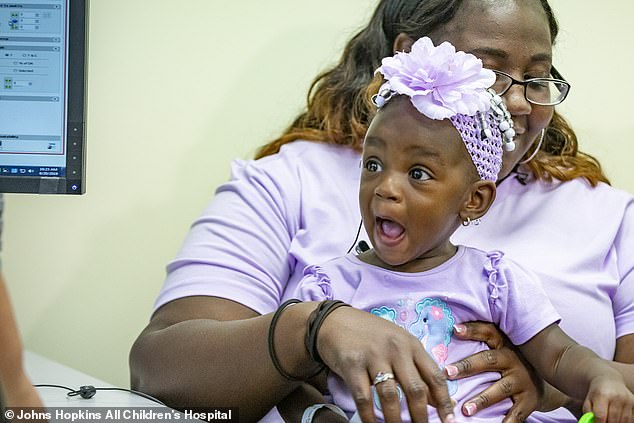 A’Deja Rivers, 15 months, from Arcadia, Florida, was diagnosed as deaf during her newborn screening. Pictured: A’Deja hearing sound for the first time 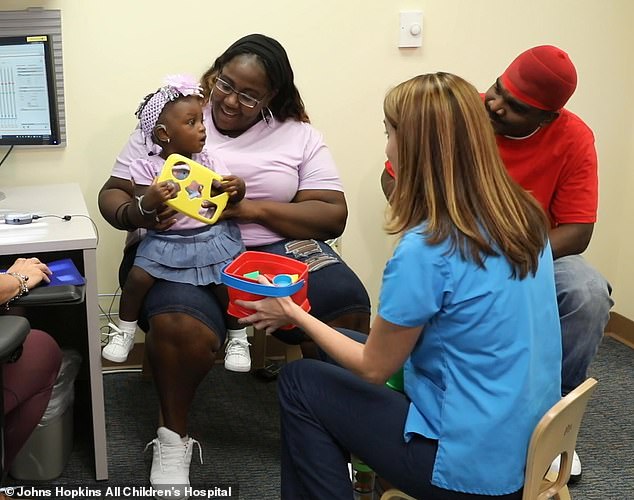 ‘I was just thinking: “Thank you, God”,’ Shaw told DailyMail.com of the moment A’Deja heard for the first time.

‘I know she feels I love her. I show it all the time. But the fact she can hear it now is beautiful.’

A’Deja’s hearing loss was total and pre-lingual, meaning she was born with hearing loss or lost her hearing before she was able to speak.

Hearing loss can be inherited or caused by non-genetic factors, such as an infection.

Between two and three out of every 1,000 children in the US are born each year with hearing loss in one or both ears, according to the National Institute on Deafness and Other Communication Disorders (NIDCD).

A’Deja was diagnosed as deaf during her newborn screening. Her father, Robert Rivers, and her older sister, five-year-old Ja’Lynn, are also hearing impaired.

Shaw said that Ja’Lynn received cochlear implants when she was 15 months old, after seeing her success with them, she and Rivers decided to try them with A’Deja.

They have two parts: a sound processor that sits behind the ear and a receiver that that is surgically implanted under the skin.

The signal between the two parts stimulates the auditory nerve, and sends the message to the brain. The brain then interprets this as sound.

First introduced in the 1980s for hearing loss in adults, they were approved by the US Food and Drug Administration for use in children above 12 months old in 2000.

In America, about 38,000 devices have been implanted in children, according to the NICDC.

‘For A’Deja, when we start, we have to figure out how much electrical current is needed to give her enough information to acknowledge sound is occurring,’ Ash told DailyMail.com

‘So we’re gradually turning up the beeping until she acknowledges it because she doesn’t have enough language to yet to say: “Yes, I heard that”.’ 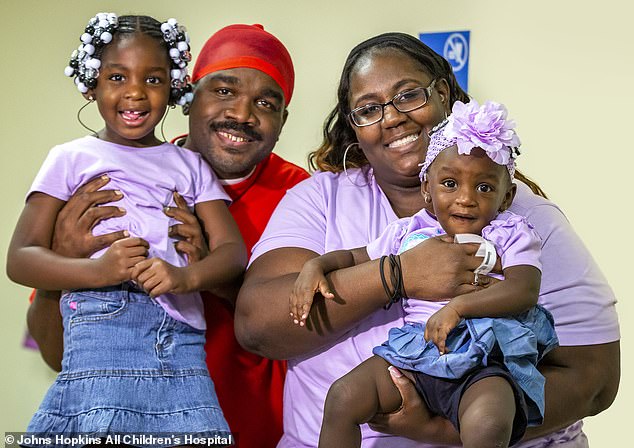 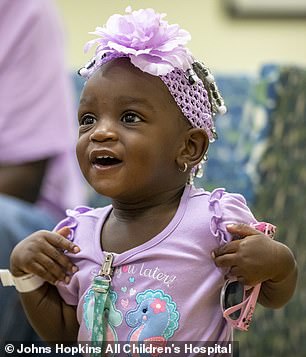 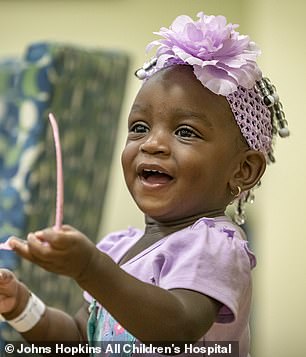 Video was taken of the moment shows A’deja’s eyes widen and her mouth drop open as she recognizes she’s hearing sound for the first time. Because A’Deja (left and right) is receiving implants at a very young age, she will only have a slight language delay

A’Deja had her devices implanted on May 17 and, after five weeks of recovery, her implants were activated.

The night before they were activated, Shaw said she could barely sleep.

‘I kept thinking: “Oh my goodness, is it time yet?”‘ she said. ‘It was excitement. I had already seen the results in my oldest daughter.’

Video was taken of the moment A’Deja’s eyes widen and her mouth drops open as she recognizes she’s hearing sound for the first time.

Shaw is seen telling her daughter: ‘Hi, I love you, baby. I love you so much.’

Then A’Deja’s grandmother walks over, kisses her on the cheek and says: ‘Granny loves you. That’s the first time you can hear Granny say: “I love you”.’

Because A’Deja is receiving implants at a very young age, she will only have a slight language delay. Children who are never exposed to a first language in their early years may never be fluent in any language.

Shaw says that her daughter is more active than she’s ever been with the new implants.

‘She’s exploring more, all the old toys she had are brand new to her,’ Shaw said.

‘All of a sudden, she realizes they make noise too. They don’t just make light anymore or are things to look at. It’s a brand new adventure for her.’