Don’t feel guilty if you want to gorge on chocolate or chips: Scientists say the body can adapt to short binges on without you gaining weight

It’s news that will reassure most people – pigging out on chocolate and crisps this weekend is unlikely to make you gain weight.

Scientists say the body is able to cope with an occasional binge but will struggle with any prolonged period of eating.

Researchers said the body’s hormones are able to ‘buffer’ a surplus in food, although there may be a slight weight increase at first.

It’s a relief for anyone prone to going overboard at Christmas, parties or summer BBQs, who fear it may undo the work of their healthy rituals. 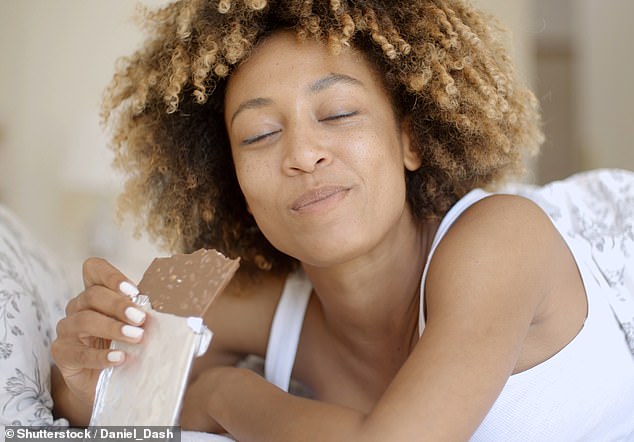 Researchers at Deakin University in Australia tested a group of eight healthy, lean men, who had an average age of 22.

They were let loose to consume an extra 1,000 calories a day from high energy snacks for either five days or 28 days in a row.

HOW MANY CALORIES DO I NEED EACH DAY?

The basic amount of calories an average adult needs per day is 2,000kcal for women or 2,500kcal for men.

This is based on the amount of energy the body needs to carry out basic functions and to walk and work throughout the day.

People who exercise a lot need to eat more calories to fuel their efforts, and young people and children burn more energy, too.

If you eat more calories than you burn in a day, you will get fatter.

Eating fewer calories than you burn will make you lose weight.

Foods which are processed and have high levels of carbohydrate, sugar and salt have higher calorie numbers than fresh fruit and vegetables.

They tucked into crisps, chocolate and calorific meal replacement drinks, the researchers wrote in the American Journal of Physiology.

Volunteers were analysed for their weight and fat mass before and after the trial so the effects could be compared.

Blood sugar and insulin levels were also recorded, which showed the men who overate were less efficient at using energy from food.

In those who overate for five days, the body adapted to the extra calories which meant that overall weight gain was barely noticeable.

Their levels of blood sugar and C-peptide – an amino acid which controls the production of insulin – did not change.

However, both periods resulted in more fat being produced around internal organs, which is a risk for metabolic conditions such as diabetes.

The researchers said: ‘Postprandial glucose and insulin responses were unaltered by five days of overfeeding but were modestly increased after 28 days.

‘The short-term overfeeding model is indicative of humans overeating during festivals and holidays.’

The team also observed an increase in hormones fasting EGP and plasma insulin in the five-day group.

The scientists proposed this could be one of the body’s methods to cope with the surge of extra calories.