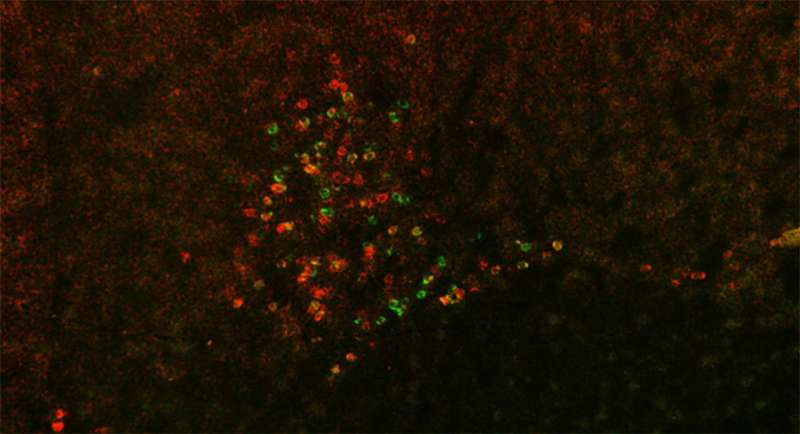 When a heavy alcohol drinker tries to take a night off, their body protests with shaky hands, heart palpitations, anxiety and headaches. These acute symptoms of alcohol withdrawal—but even more so the enduring emotional distress that lingers into protracted abstinence—are one reason people with alcohol use disorders have a hard time quitting. Now, scientists at Scripps Research have made new headway in understanding the basis of alcohol withdrawal in the brain.

Previously, a signaling molecule called corticotropin-releasing factor (CRF) was linked to alcohol withdrawal; when researchers block CRF in rats or mice addicted to alcohol, the animals drink less. Scientists believed that the suspect CRF is produced by neurons in a brain area called the central nucleus of the amygdala. But in the new study, published in the journal Molecular Psychiatry in March 2022, the team found that—at least in mice—these cells aren’t required for alcohol withdrawal or alcohol dependence.

“Understanding the basis of withdrawal is incredibly important for treating alcohol addiction in humans, because this is one of the motivational drivers of excessive alcohol drinking,” says Candice Contet, Ph.D., associate professor in the Department of Molecular Medicine at Scripps Research. “These findings weren’t what we expected, but help us get closer to understanding alcohol addiction and the role of CRF.”

Many studies have established that CRF levels increase in the central nucleus of the amygdala of rats and mice during alcohol withdrawal as well as in response to other psychological stressors. Pharmaceutical companies are actively investigating how to target CRF signaling to treat a variety of psychological diseases including alcohol addiction. But results in humans have been inconclusive, and scientists have not been able to pin down which cells in the brain release CRF during alcohol withdrawal.

Contet’s group wanted to test the hypothesis that cells in the central amygdala produce the CRF necessary for alcohol withdrawal. In the new study, the researchers activated and blocked these amygdala-residing neurons in mice dependent on alcohol. First, they activated the neurons in various patterns designed to replicate cycles of repetitive drinking and withdrawal. However, activating these CRF-producing neurons had no effect on the drinking behavior of the mice, even though other experiments confirmed that CRF was getting released in the central amygdala. Next, the team showed that blocking these neurons also had no effect on the behavior of mice with alcohol dependence, which was surprising because it meant that the CRF known to signal in the amygdala to promote alcohol drinking wasn’t being produced in that area.

“We basically saw that activating these neurons within the central amygdala is not sufficient nor necessary for the escalation of drinking in mice,” says Contet. “So it means that the CRF is coming to the central amygdala from somewhere else in the brain.” Other neurons in the brain are known to produce CRF, but the team doesn’t yet know which might be involved in alcohol dependence.

“These findings were surprising but highlight the complexity of the CRF system and the changes in brain circuitry that occur following chronic alcohol exposure,” says Melissa Herman, a former Scripps Research postdoctoral research associate and co-first author of the new paper.

When the team looked at the spatial patterns of organization of the amygdala neurons they were studying, they made another unexpected observation—the CRF neurons weren’t organized the same way in mice brains as they are in rat brains. The observation, Contet says, suggests that there might be some variation in CRF between species. This also could explain why the amygdala neurons in question have been found to be necessary for alcohol withdrawal in rats but, according to the new data, not in mice.

“Our data has to be taken with a grain of salt when it comes to implications for humans,” she says. “Since there’s this important difference between rats and mice, more work is definitely needed to figure out the relevance to humans.”

The group is planning experiments to further understand the differences in CRF between rats and mice, as well as to pin down which other neurons in the brain might be involved in its production during alcohol withdrawal.