A simple test to help doctors catch a devastating disease that kills half of all infants who develop it early may soon be on the way, a new study suggests.

Necrotizing enterocolitis (NEC) kills about 500 babies – the vast majority premature – every year in the US. Often, by the time babies are diagnosed, the disease is so progressed that infants may have only days or hours to live.

An earlier diagnosis could be the difference between life and death for these babies.

Researchers at Louisiana State University (LSU) have identified a protein that can be found in babies’ stool samples and predicts the development of NEC with up to 97 percent accuracy – perhaps even before the symptoms set in. 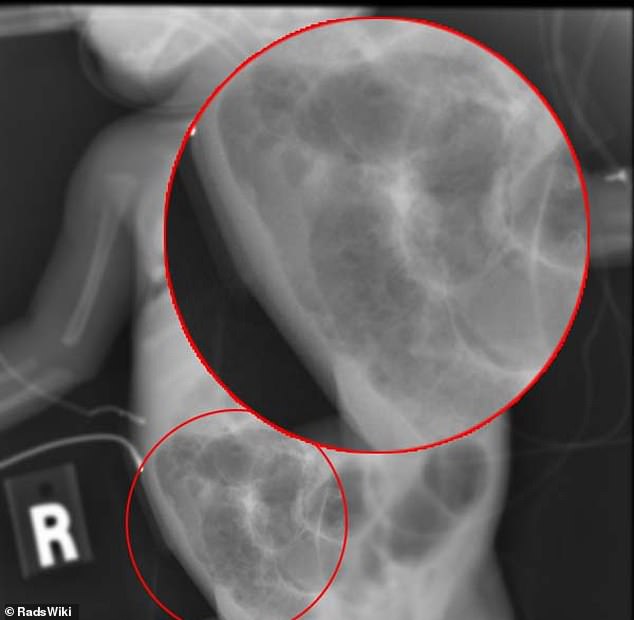 X-rays like this one are currently used to diagnose necrotizing entercolitis, but they’re only about 44% accurate at catching a disease that kills premature infants within hours or days. A new study suggests a diagnostic test for a protein could predict the disease before it starts

NEC is a leading cause of infant death in the US, claiming the lives of more babies than the flu, allergies, car accidents, choking, and crib accidents combined, according to he NEC Society.

Although there is a form of the disease that affects full-term infants, that variety is milder, whereas the disease is severe and often deadly for premature babies.

It isn’t clear what exactly causes NEC, but we do know that it begins with inflammation in the large or small intestine, which allows bacteria to invade the intestines and colon, killing the tissue and potentially spilling out beyond the organs.

It’s hard to catch – babies with NEC tend to appear simply fussy, and not feed well, but these are fairly commonplace symptoms or behaviors in premature babies.

The disease moves so fast that by the time parents and doctors recognize it, it may be past the point of no return for these infants.

But these have to be done frequently to monitor the disease once its suspected because it progresses alarmingly quickly, only work when the disease is already severe and their success rate at detecting it can be as low as 44 percent.

A blood test is not an option for the premature babies most often affected by the disease because these babies have around 40 mL of blood and a test would require drawing about 5 mL, triggering anemia or other dangerous conditions for them.

Dr Sunyoung Kim, a professor of biochemistry and molecular biology at LSU told DailyMail.com that ‘Louisiana has one of the highest rates of NEC in the country, that’s why the neonatologists were practically storming my door.’

They wanted a faster, safer test for NEC.

So she and her team went looking for a biomarker, something unique in the bodies of babies with or at risk of NEC that could tip scientists off to the devastating disease.

What they found was a protein called intestinal alkaline phosphatase (iAP).

The protein is ‘responsible for cross-talking with the bacteria that are resident in our gut,’ and alerting the immune system to the presence of an invader, explained Dr Kim.

In stool samples taken from 136 premature babies they found that in the 18 percent of them who developed NEC, the levels of iAP were not only high, but the protein was broken, or ‘dysfunctional.’

In the samples from babies with suspected cases, the proteins were only partially functional.

‘The study was successful beyond our imagination because it’s [present] at the beginning of inflammation,’ says Dr Kim.

‘It’s the first protein that says, “hey, you guys that are in here, are you helping or hurting,” she adds referring to the healthy versus invasive bacteria.

Symptoms and visible markers of NEC are similar to those of sepsis and other bacterial infections.

But, importantly, the iAP biomarker was unique to NEC.

Dr Kim says that, on the heels of this research, she and her team are hoping they may be able to develop a simple, non-invasive test that could not only detect but predict NEC, potentially saving the lives of hundreds of infants.