Scientists eliminate HIV in the entire genome of lab mice for the first time ever: Breakthrough paves the way to a human cure – with clinical trials set to start next year

Scientists eliminated HIV from the entire genome of lab mice for the first time ever using a slow-acting drug and gene-editing.

The feat, revealed in a publication today, suggests this two-pronged technique could be the basis for the first universal cure in humans, with human clinical trials slated to start next summer.

Only two people have been cured of HIV, both had terminal blood cancer and underwent a risky bone marrow transplant that obliterated both diseases.

But the transplant technique has not worked in anyone else – proving fatal in some – and it effectively requires that the patient have both HIV and cancer.

Now, a team spearheaded by an HIV expert in Nebraska and a gene-editing expert in Philadelphia has presented the unprecedented fruits of a five-year project: using a slow-acting drug called LASER ART that corners the virus, followed by CRISPR Cas9 gene-editing that blitzes it.

In a new paper, they reveal this approach successfully eliminated HIV from the entire genome of a third of their lab mice. 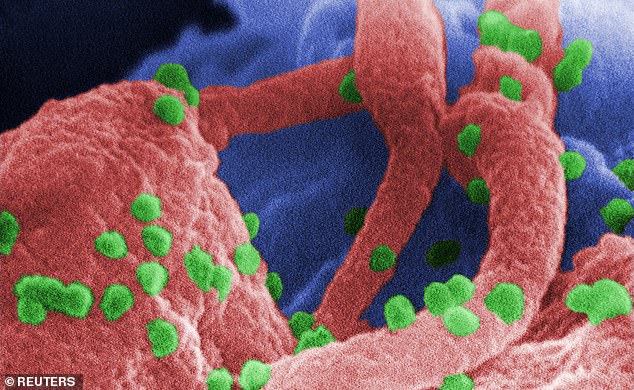 Even they were surprised.

‘We didn’t believe it,’ Dr Howard E Gendelman, Director of the Center for Neurodegenerative Diseases at the University of Nebraska Medical Center, told DailyMail.com.

‘We thought it was a fluke, a problem with the graphs; that the cells carrying HIV had died; that our assay system was wrong.

‘It was only after we repeated it a couple of different times,’ he says, that they accepted they had hit the veritable jackpot.

‘After we got it right, we submitted it for publication and it was rejected from many different journals,’ Dr Gendelman said.

‘They had a hard time believing HIV could be cured.’

He and his co-author (and ‘best bud’) Dr Kamel Khalili, of Temple University in Philadelphia, added no less than 20 supplemental figures to their paper – far more than usual – to prove that their results were not a fluke, finally getting the green light from Nature Communications.

‘There was a lot of frustration, self-introspection, denials, reaffirmation, and just laborious day by day activities to prove it,’ Dr Gendelman said.

HIV is so hard to obliterate because it is a virus that infects the genome.

It buries itself inside hidden reservoirs, ready to mount a resurgence at any point.

These days, we have incredibly effective drugs (called ART, or anti-retroviral therapy) that suppress the virus to such an extent that it is undetectable, and cannot be transmitted to another person.

It means people who have HIV can live a long, healthy life without the virus turning into AIDS.

But ART cannot get at the hidden reservoirs where HIV’s reserves lie.

While standard ART is a soluble drug that dissolves into the blood and gets to work, the drugs in LASER ART are packaged inside nanocrystals, which the immune system recognizes as foreign and carries it up to tissues where HIV hides.

Once inside those reservoirs, the nanocrystals slowly dissolve, releasing ART into the hardest-to-access spots over a longer period of time.

It means HIV is held at bay for extended periods of time.

Dr Gendelman and colleagues have showed that the technique could be used as an easier-going drug for people with HIV: it would only need to be taken once a year, and because it releases slowly, it would be a gentler experience, with fewer ups and downs that the body experiences from a daily hit of medication.

Meanwhile, Dr Khalili, a named inventor on patents that cover the coveted gene-editing technology CRISPR-Cas9, was trying to use CRISPR to wipe HIV from the genome of mice – without success.

The main problem is that HIV replicates too fast for CRISPR to do its work.

CRISPR carries a mugshot of the target it is seeking to destroy, which can work well if there is only one target, or a few. Trying to tackle HIV is like running into a festival of clones, and trying to get to every single one.

He approached his long-time friend and colleague Dr Gendelman to discuss using LASER ART to corner and control the HIV virus, giving CRISPR the space to do its work.

At first, they tried to combine the techniques to deliver them together, but that flopped.

Eventually, after years of trial and error, they arrived at LASER ART first, followed by CRISPR-Cas9 to eliminate the virus in a third of mice – first in two out of seven, then in three out of six, then in four out of 10.

To get at the other two thirds, Dr Khalili said, they are exploring adding another CRISPR technique, targeting not just HIV but also the CCR5 gene, which, acts as a doorway to HIV. People who do not have CCR5, or have a mutation of it, (like the Berlin Patient and the London Patient, after their transplants) are essentially immune to HIV.

This is not yet a cure, but Dr Khalili and Dr Gendelman are bursting with relief and excitement.

‘At the very least it’s a proof of concept,’ Dr Gendelman said. ‘It shows it’s possible that HIV could be cured.’

Their peers are also impressed, but call for a wider pool of animals – and, indeed, humans – before the technique can get the stamp of approval.

Dr Paul Freemont, Co-Director of the Centre for Synthetic Biology and Innovation, Imperial College London, said: ‘This is an exciting study showing that it might be possible to use a chemical and genetic editing therapy in combination to eliminate HIV permanently from infected cells.

‘HIV is very clever in that it embeds its own genetic code into cells which when activated can make more virus, and so methods to both kill active viruses and also eliminate HIV genetic code in infected cells are needed.

‘However the number of mice used in the study is small and further trials will be needed to confirm this initial but exciting proof-of-concept study.

‘However, it is still an open question as to whether such an approach would work in humans, particularly off-target effects.’