Gene editing could cure cystic fibrosis before birth, study suggests: Scientists use controversial CRISPR on mice to fix DNA defects that lead to the lung disease

Scientists may soon be able to gene-edit horrible lung diseases like cystic fibrosis out of the human genome, a new study in mice suggests.

It has been hailed as one of the greatest scientific advancements of the last several decades, and the medical community is looking to it as the best hope for treating otherwise incurable inherited diseases.

Now, University of Pennsylvania researches have successfully used CRISPR to fix DNA defects that cause many lung diseases in mice embryos.

The new study suggests we might someday be able to cure genetic diseases before birth in humans, too – but changing unborn babies may cause ethical controversy. 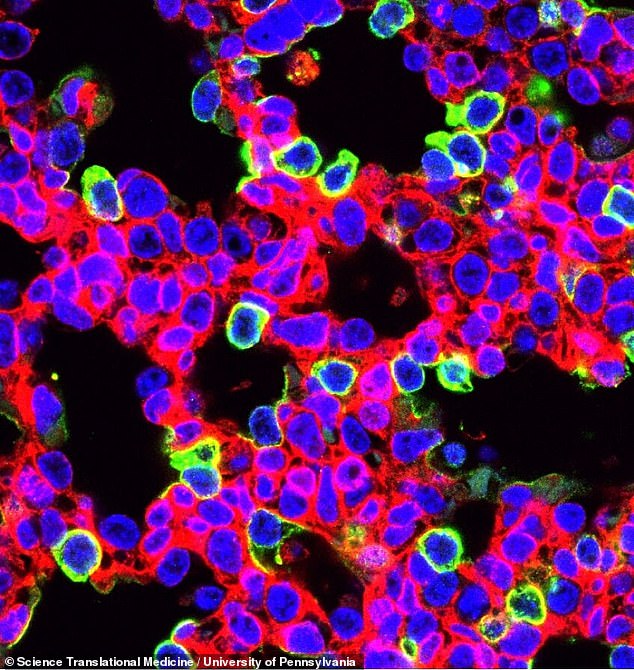 Scientists successfully edited the faulty DNA that causes lung diseases like cystic fibrosis in mice, suggesting that the CRISPR tool might someday eliminate the illness from humans

About 1,000 people will be diagnosed with the common genetic lung disease, cystic fibrosis, in the US this year.

The majority of them will be under two, and few will survive to see their 40th birthdays.

Broadly, respiratory problems account for over 20 percent of hospital admissions among children.

Cystic fibrosis is devastating, causing mucous to build up in the lungs and eventually making it impossible to breathe, but some related genetic faults prove deadly before or immediately after birth.

In addition to cystic fibrosis, surfactant protein syndromes and alpha-1 antitrypsin deficiency are each caused by errors in a single gene.

That single mistake has lethal results, but this also makes these diseases good targets for CRISPR editing.

The CRISPR can be tweaked to target these specific genes, snip them out and replace them with correct versions.

But getting it right requires impeccable timing, so that the gene DNA change will affect the development of the lungs’ lining, but not create broader ripple effects than clinicians want.

‘The trick was how to direct the gene-editing machinery to target cells that line the airways of the lungs,’ said co-lead study author Dr Edward Morrisey, who specializes in developmental biology at the University of Pennsylvania.

‘We wanted to know if this could work at all.’

Dr Morrisey and his team carefully calculated the optimal moment to deliver the DNA fix to the embryonic mice.

They decided on a small window of time just four days before the mice were due to be born.

Four days prior to delivery would be roughly equivalent to a human woman’s third trimester, since mice carry their babies for much less time.

They added CRISPR to the amniotic fluid and waited to see how the lung development would change.

Changes to the mice’s DNA most effectively altered the alveolar epithelial cells and airway secretory cells, which line the airways and are involved in cystic fibrosis.

These cells maintain a coating for the lung that regulates their their surface tension and keeps them from collapsing.

A second experiment found that gene editing allowed mice to survive another genetic lung disease that is otherwise 100 percent fatal, usually within hours the animals’ birth.

‘The ability to cure or mitigate a disease via gene editing in mid- to late gestation before birth and the onset of irreversible pathology is very exciting,’ said study co-lead, Dr William Peranteau, a fetal surgeon at Children’s Hospital of Philadelphia.

‘This is particularly true for diseases that affect the lungs, whose function becomes dramatically more important at the time of birth.’

While CRISPR’s success is to be celebrated in mice, it might raise concerns if it were being used in humans.

Earlier this year, Chinese scientists announced that a pair of twins they had gene edited had already been born.

Shortly thereafter, other scientists discovered that the altered gene might also change the children’s brains.

In the aftermath, bioethicists and politicians the world over have expressed their concern over changing babies before birth – which some see as ‘playing god.’

Yet others would welcome any hope against incurable diseases like cystic fibrosis.

Dr Peranteau said noted that ‘the current research is a proof-of-concept study.’

But it highlights ‘the exciting future prospects for prenatal treatments including gene editing and replacement gene therapy for the treatment of congenital diseases,’ he added.