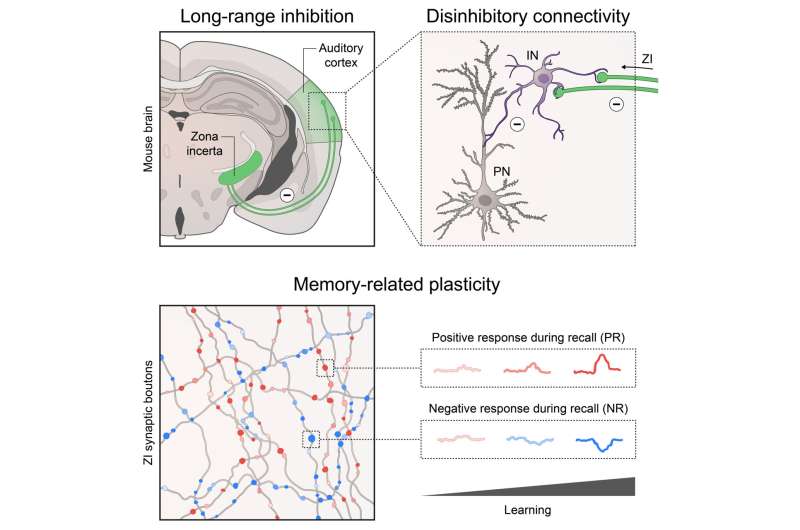 The neocortex is the largest and most complex part of the brain and has long been recognized as the ultimate storage site for memories. But how are traces of past events and experiences laid down there? Scientists at the Max Planck Institute for Brain Research and the University of Freiburg Medical School have discovered that a little understood brain area, the zona incerta, has an unconventional way of communicating with the neocortex to rapidly control memory formation.

Memory is one of the most fundamental and fascinating functions of the brain, allowing us to learn from experience and remember our past. It is therefore a central element of our individual and collective human identity. Moreover, a mechanistic understanding of memory has implications reaching from treatment of memory and anxiety disorders, to artificial intelligence and efficient hard- and software design, and is therefore not only of great interest, but also of great importance.

In order to form memories, the brain needs to build associations between sensory signals that come “bottom-up” (or outside-in) from the environment, and internally-generated “top-down” signals that convey information about past experiences and current aims. These top-down (or inside-out) signals continue to be enigmatic and are therefore a major focus of current research.

Work over the last few years has begun to identify a number of such top-down projection systems, which all showed several commonalities. They signaled by excitation (the standard way of sending information between cortical regions), and also displayed a common mechanism for memory encoding—a stimulus with learned relevance evokes a stronger response in these systems, suggesting that this positive potentiation is one piece of the puzzle that is the memory trace.

“In contrast to these systems, long-range inhibitory pathways are much sparser and less numerous, but mounting evidence suggests that they can still have surprisingly robust effects on network function and behavior,” says Prof. Dr. Johannes Letzkus, Professor at the University of Freiburg and former Research Group Leader at the Max Planck Institute for Brain Research who headed the new study published in Neuron. “We set out to determine whether such inputs might be present in neocortex, and if so, how they might uniquely contribute to memory.”

Dr. Anna Schroeder, first author of the study and postdoctoral researcher in the Letzkus lab, decided to focus on a predominantly inhibitory subthalamic nucleus, the zona incerta, to address this question. While the function of this brain region remains as mysterious as its name suggests, her preliminary findings indicated that the zona incerta sends inhibitory projections that selectively innervate regions of neocortex known to be important for learning. In her efforts to study plasticity in this system across all stages of learning, she implemented an innovative approach that allowed her to track the responses of individual zona incerta synapses in the neocortex before, during and after a learning paradigm.

“The results were striking,” recalls Schroeder. “While about half of the synapses developed stronger positive responses during learning, the other half did exactly the opposite. In effect, what we observed was thus a complete redistribution of inhibition within the system due to learning.”

This suggests that zona incerta synapses encode previous experience in a unique, bidirectional fashion. This was especially clear when the scientists compared the magnitude of the plasticity with the strength of the acquired memory. They found a positive correlation, which shows that zona incerta projections encode the learned relevance of sensory stimuli.

In separate experiments, Schroeder discovered that silencing these projections during the learning phase impairs the memory trace later on, indicating that the bidirectional plasticity occurring in these projections is required for learning. She also found that these inhibitory projections preferentially form functional connections with other inhibitory neurons in the neocortex, in effect forming a long-range disinhibitory circuit.

“This connectivity implies that an activation of the zona incerta should result in a net excitation of neocortical circuits,” says Schroeder. “However, combining this with the redistribution of inhibition that we see with learning shows that this pathway likely has even richer computational consequences for neocortical processing.”

The scientists were particularly intrigued by the population of zona incerta synapses that showed negative potentiation, as this type of plasticity has never been observed before in the top-down excitatory pathways that were previously studied. They felt that computational approaches might provide valuable insights on how these unique responses develop.

Further analyses in collaboration with the laboratory of Prof. Dr. Henning Sprekeler and his team at the Technical University of Berlin revealed that, remarkably, these negative responses are the main driver in the changes in stimulus representation that occur during learning itself.

This work provides the first functional dissection of how long-range inhibition shapes the computations of the neocortex. The signals identified in this study are likely critical not only for memory, but for a number of additional brain functions, like attention. Moreover, the zona incerta is among the very few regions standardly targeted for deep brain stimulation in human Parkinson’s patients, opening up an intriguing possibility for translational work in the future.

Ultimately, this study will hopefully also inspire other researchers to keep exploring the role of long-range inhibition in regulating neocortical function, both from the zona incerta and from additional, yet to be identified sources.