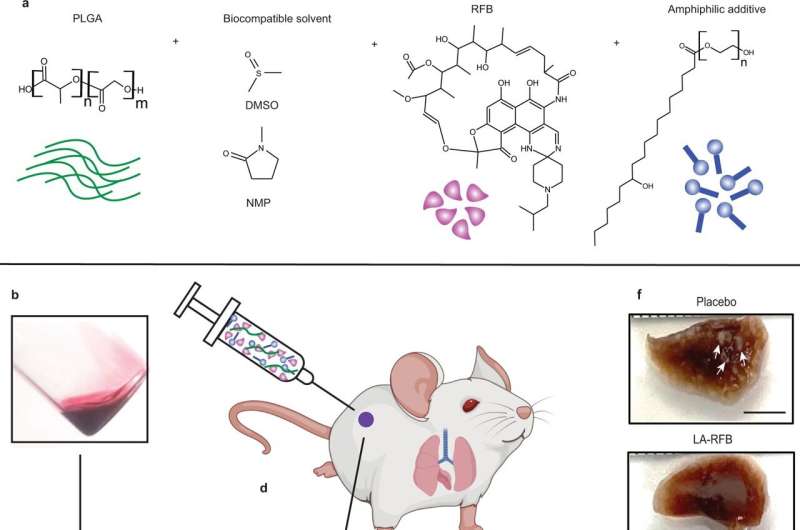 In 2020, more than 1.5 million people around the world died of tuberculosis, marking the first time in more than a decade that annual TB deaths had increased and demonstrating the global need for better access to treatments. To address that problem, scientists at the UNC School of Medicine, the UNC Institute for Global Health and Infectious Diseases, and the International Center for the Advancement of Translational Science developed a long-acting injectable formulation of the anti-TB drug rifabutin.

Published in the journal Nature Communications, research in animal models showed the potential of delivering a TB drug with one injection that lasts at least four months, in lieu of the current standard treatment requiring constant adherence to a daily drug regimen.

“We think our approach could dramatically change TB treatment,” said Martina Kovarova, Ph.D., associate professor of medicine at UNC “Affordable long-acting formulations with generic anti-TB drugs would help ease the burden of this disease on low-income communities around the world where better access to treatment is most needed.”

Co-author Miriam Braunstein, Ph.D., professor of Microbiology and Immunology at the UNC School of Medicine and member of the UNC Institute for Global Health and Infectious Diseases, added, “During the COVID-19 pandemic, we witnessed more deaths due to TB because of disruption or reallocation of health services, setting us back at least five to eight years in the global fight against TB. We think long-acting formulations could be a game-changer, whether it’s for preventative therapy or treatment of disease.”

Tuberculosis, which is caused by Mycobacterium tuberculosis (Mtb), affects an estimated 10 million people a year, according to the World Health Organization, which also estimates that about one-quarter of the world population has a latent TB infection with the potential for reactivation, leading to symptoms such as weakness, weight loss, fever, coughing, chest pain, and coughing up blood.

Not adhering to strict drug regimens can lead to treatment failure and drug resistance. To overcome this, UNC researchers sought to create a therapeutic delivery system that would provide an effective way to improve adherence to medications.

Co-first authors Manse Kim, Ph.D., a postdoctoral researcher at UNC-Chapel Hill, and UNC graduate student Claire Johnson, led experiments to combine rifabutin with biodegradable polymers and non-toxic solvents that solidify in the body after subcutaneous injection. The researchers also added a compound to this formula to significantly increase the amount of rifabutin that could be included.

Using mouse models, the researchers observed how the solidified implant slowly eroded over the course of 16 weeks, releasing their drug payload in a sustained fashion throughout. This long-acting formulation prevented infection in mice that were exposed to TB. Also, the single injection cleared infection from lungs and other tissues in mice that had been previously infected with TB. The researchers observed no adverse effects in the mice, but if side effects arise, the implant is removable.

This type of long-acting technology has already been FDA-approved for other conditions, such as cancers, schizophrenia, and opioid dependency.