The next generation of smart watches? Scientists create wireless ‘electronic sticking plaster’ which can sense people’s heart rate, breathing and movement through the skin

They hope it could first be used to monitor patients with heart or sleep disorders which need continuous monitoring.

The soft and flexible sticker is attached like a plaster to the wrist and has tiny sensors inside to measure bodily functions.

However, the user still needs to wear a device attached to their clothing for the data to be accessed on a smartphone.

Stanford University are working on upgrading the sticker to be able to sense sweat and temperature. 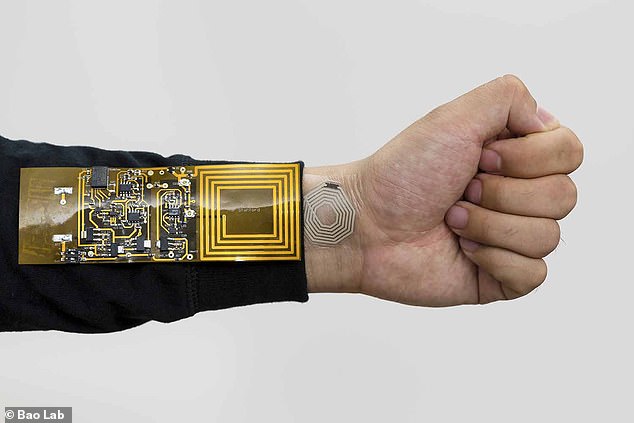 Scientists have created a flexible electronic sticker that wirelessly monitors your pulse, respiration and muscle activity. It is pictured attacked to the wrist. It sends information to a receiver attached to clothing, before sending the information to your smartphone 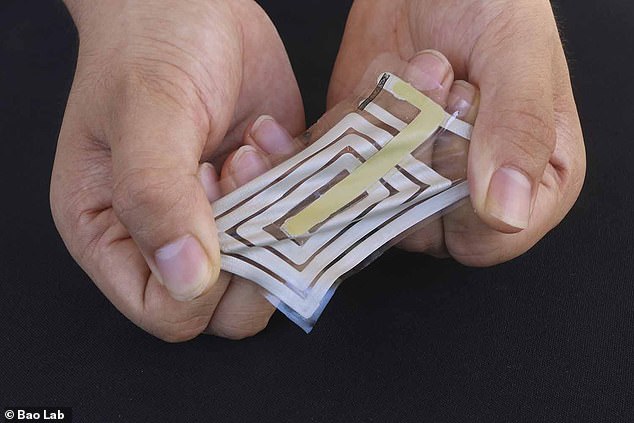 Inside the sticker are antennae made with metallic ink that pick up changes in the body. Pictured, the sticker in another design, published in the journal Nature Electronics

Zhenan Bao, a chemical engineer in the team said: ‘We think one day it will be possible to create a full-body skin-sensor array to collect physiological data without interfering with a person’s normal behaviour.’

Wearable technology is an expanding market as companies endeavour to go above and beyond the abilities of a new tracker.

The tracker sends green light through the skin which is partially absorbed by arteries.

As you exercise, these arteries expand as blood flow increases – meaning more green light is absorbed rather than reflected back to the tracker.

The tracker estimates your heart rate by seeing how much light is reflected back.

The amount of light that passes back through the skin to the tracker can be affected by the amount of melanin in the skin, and any tattoos.

One of the key measuring tools of wearable sleep monitors is called actigraphy which has been used in medical sleep tests for decades.

Actigraphy records movement through a measuring device called an accelerometer.

The idea is that a certain amount of movement will be recorded as ‘awake’ and periods of being still corresponds with being ‘asleep’.

Sleep trackers with a heart rate tracking feature can measure your variations in heart rate to assess sleep quality and other parameters.

Trackers that measure the body’s core temperature use this information to predict stress levels and fertility, for example.

Currently most top fitness trackers – such as the Fitbit or Apple Watch – monitor movement and heart rate, and some temperature, while you wear them as a watch.

The researchers at Stanford University wanted to create something that can do these things without being so bulky and uncomfortable.

They have been working on this unique system called BodyNet, for three years, describing it in the journal Nature Electronics this month.

As the skin moves, the electric current in the metallic ink alters, giving measurements of the person’s vital signs.

The information is sent wirelessly to a receiver attached to a person’s clothes.

Then, the receiver transmits the information to a smart phone or watch through Bluetooth.

The authors wrote: ‘The platform can continuously analyse critical human signals (pulse, respiration and body movement) and could thus potentially be used for real-time physiological and clinical investigations in a next-generation personal health monitoring system.’

The team have developed a type of RFID – radiofrequency identification – which is the same technology that uses electronic signals to allow you to open a hotel room with a card instead of a key.

So far, the technology has only been trialled on one individual.

The team stuck sensors to the wrist and abdomen of one test subject to monitor their every heartbeat and breath.

They also stuck stickers on the person’s elbows and knees to track muscle activation.

Although the sticker is barely noticeable, the receiver is still battery powered and needs work to make it less clunky, the team said.

To create something gym-goers can use, the team said they need to make the receiver even more durable and small – and they plan to test weaving it into clothes.

The researchers did not specify if you take the sticker off to wash or how often you need to replace it, if at all.

WHY FITNESS TRACKERS AND SMART WATCHES CAN BE INACCURATE

There are two ways that a fitness watch can measure the distance a person has ran, walked or jogged.

Some step trackers don’t have a built-in GPS – so will calculate distance travelled on the number of steps that have been taken.

This is based on number of steps multiplied by average stride length – which can affect accuracy.

Other watches use GPS models or connect to your smartphone to use GPS.

GPS models are more accurate – but Which? results showed some that overestimated distance travelled by up to 20 per cent.

How was accuracy measured?

They are also put through a series of daily tasks, such as loading and unloading the dishwasher and carrying shopping.

To test calorie’s burned, testers wore a face mask that was linked to a gas-analysis system.

This measured oxygen intake and carbon dioxide production for each breath, meaning calories were measured as accurately as possible.

Tracker results were then compared with gas-analysis data to find the most accurate devices.