Like many mums, Deanna Chapman was too busy looking after her family to fuss about her own wellbeing. But when she discovered a lump in her breast, she was forced to put herself first.

Along the route of her subsequent cancer journey, she's found support all around and realised that feeling better can come from the outside in. Here she shares her story with Zoë Foster Blake, ambassador for the Look Good Feel Better program. 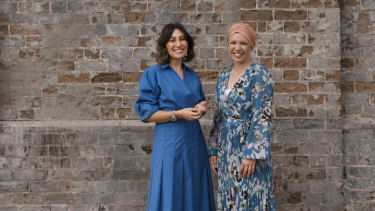 Tell me a bit about yourself.

I am 37, a mother of boy and girl twins who will turn four in a couple of days. I thought I was living life. I'd finally got to the point where the kids were sleeping through the night, everyone was happy and I was starting to find some time for me. I was having a really great year. Then, in October last year, I noticed a lump.

How big was it?

A little bit bigger than a pea. I get lumps every so often, so I decided to just get on with things. About a month later I went, "Actually, no, that is still there."

It could have just been a cyst. I went to see the doctor and even she felt it and said, "It kind of feels like a cyst, but let's go and do all the tests."

So I was off having a mammogram and then they sent me to an ultrasound. The man doing the ultrasound said to me, "What are you doing tomorrow?" I said, "Why?" He says, "You'll need to come back in for a biopsy."

I guess you don't know what's normal then, either …

I was like, "Should I be stressing?" I didn't really know. My doctor rang and asked me to come in. As soon as I looked at my doctor I knew, and she started crying and I started crying.

Now that your treatment is finished, what do you say?

I usually say I've just finished chemo, rather than having to say I have, or I've had, breast cancer. But, from what the doctors tell me, I am able to say that I had cancer. They were confident that the surgery had got rid of all of it.

I'm 38 and also have two children. I feel it's a story that women our age hear and we never really think it could happen to us, but it's terrifying. How has it impacted your life?

It has taught me that I have to be vulnerable around others, that there's no hiding it. I've always been the coper, I've always been the tough one, the one who will just kind of get on and push through things, regardless of how I was feeling. I do have to put my hand up and say, "Can you come and help with the kids? I need more help." Because there's no way we would have gotten through it without help.

What changes in your appearance did you notice first and foremost during your treatment?

Definitely the hair. I've always had a lot of hair, so it was kind of comical when it was just shedding constantly. And my husband was like – and I didn't think this would be as bad as it was – "It's everywhere." I think they said that three weeks after the first treatment it would start to come out. Mine probably held on for a good three or four months.

How does that change your identity? I mean, we talk about a bad-hair day – you have one and you're off, your confidence wavers. How does it feel when it's gone?

It's horrible. And I was very reluctant to just shave it off for that reason. Once it's gone, it's gone. I could deal with my little wispy comb-over for a while because I always put something on my head and that sort of made me feel better – I was holding on to it. But it got to a point where it was ridiculous – I could count the number of long hairs on my head. It just needed to go.

I went upstairs one night and clippered it off, then went downstairs and looked at my husband. He was like, "How's it feel?" And I was like, "Done. It needed to be done." But I now regret every time I complained about having a bad-hair day.

How did you hear about Look Good Feel Better and what made you decide to come to the workshop?

Before I'd started chemo, we had to do a tour and introductory session at the clinic, including a one-on-one session with the nurse. They give you a whole pamphlet of stuff that you need to know: this is what's going to happen; this is what to expect on the first day when you come in; this is the clinic; this is what it looks like; this is where you'll go. Within that pack was the pamphlet for Look Good Feel Better.

For me, it felt like I was taking control in what was happening. I wasn't really thinking about what it would be, but I'd heard positive reviews from people I'd met. And another girlfriend of mine had said, "You know, I went to that workshop with my friend when she was sick. It was really good."

I think it's important to clarify that it doesn't cover how to do skincare and make-up, because you don't know how. You're facing an extra set of conditions for your skin and your hair that you've never had to deal with before, like not having eyelashes, and how that changes your face and brows and all these things you take for granted.

And what to do with your head once you have no hair. Going through scalp care was something I never thought I would need to know. Then, when your hair grows back, it's going to grow back patchy and it's probably going to grow back curly and this is what you should do. You at least felt you had some sense of what was going to happen.

Whenever I discuss Look Good Feel Better with people like yourself, I hear back a resounding message that anyone who's going through treatment should do it.

I've heard people in the clinic say, "You should go." And I've interjected in their conversation and said, "Yes, you really should, it's fabulous. You'll love it."

You can see why the nurses push it because they can see that the mental wellbeing of people, if they go to this, will be a little bit better.

Well, congratulations on getting through a hard time with a smile on your face. It's a cliché but I think a lot of people come out of this and think to themselves, well, I'm making some changes.

I'm definitely reassessing what I want to do and where I want to be.

I'm trying to find good out of this crappy situation, to see if there are ways that I can obviously give back, or try to encourage others in the same situation to feel a little bit better about the situation that they're in.

That's beautiful – such a true selflessness and a kindness and a giving. But I know your husband would agree with me that you just have to look after yourself.

That's one thing I need to continually be aware of and going through this, even he's noticing it. So our relationship has definitely changed and evolved through all this. We talk about a lot more things and have deeper conversations. Besides childbirth, where there is no dignity, this is a next level – it's a very different place to be able to take someone along on that journey. He was at every chemo session. He hates needles, hates blood, but he was there every time. I was like, "I'll be able to drive myself." He said, "I'll be there."

This article appears in Sunday Life magazine within the Sun-Herald and the Sunday Age on sale September 15.