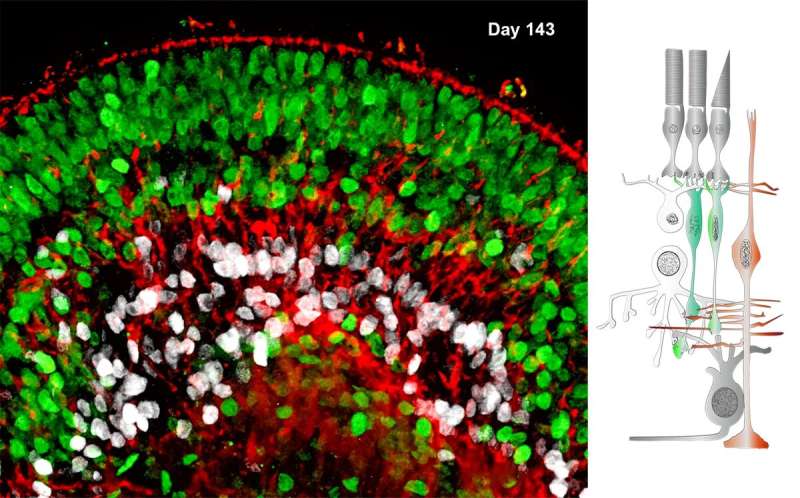 The SARS-CoV-2 coronavirus does not only cause infections of the respiratory tract. Other organ systems, such as the nervous system, can also be affected. In fact, SARS-CoV-2 mRNA has been detected in the brain in autopsies of patients who died from COVID-19. There is also growing evidence that coronaviruses can enter the retina of the eye, yet it is unclear which retinal structures are infected by SARS-CoV-2 and whether the retinal pathologies identified in COVID-19 patients are a direct or indirect result of retinal infection. A collaborative team of researchers led by Thomas Rauen and Hans Schöler of the Max Planck Institute for Molecular Biomedicine and virologist Stephan Ludwig of the Westfälische Wilhelms-Universität Münster has now decided to utilize organoids—an organ-like model system—of the retina from human reprogrammed stem cells to study SARS-CoV-2 infection of the retina. According to the study, SARS-CoV-2 actually infects retinal cells, especially retinal ganglion cells, but also light-sensitive cells. Furthermore, the researchers show that coronaviruses can also replicate in these cell types. This finding is new and underlines the need to monitor retinal pathologies as a possible consequence of long COVID.

A good three years ago, Yotam Menuchin-Lasowski would not have thought that the human retinal organoid model he established at the Max Planck Institute in Münster would be used in research on SARS-CoV-2. That was when the scientist began working on the model system, based on human reprogrammed stem cells, as a part of the White Paper project “Brain Organoids: Alternatives to Animal Testing,” funded by the Max Planck Society.

When more and more cases of neurological impairments, as well as visual disturbances during or following a Corona infection appeared in the media, it seemed only logical for the Max Planck researchers that they should use retinal organoids to study SARS-CoV-2 in the retina. After all, various studies reported detection of SARS-CoV-2 virus in retinal biopsies taken from patients who had died from COVID-19.

Following this, the retina-organoid model is now proving to be a relevant alternative to animal testing, as SARS-CoV-2 infections in humans can only be inadequately replicated in animal models, if at all. “Our retina organoid system replicates the anatomically complex structure of the human retina remarkably well,” says Yotam Menuchin-Lasowski.

Human iPS cells are used as the starting material for the generation of the retinal organoids. These are cells obtained from biopsies and reprogrammed into artificially induced stem cells. “In four to five months, under suitable culture conditions, the iPS cells give rise to mature retinal organoids in which the various cell types arrange themselves in a retina-typical manner,” says Menuchin-Lasowski. 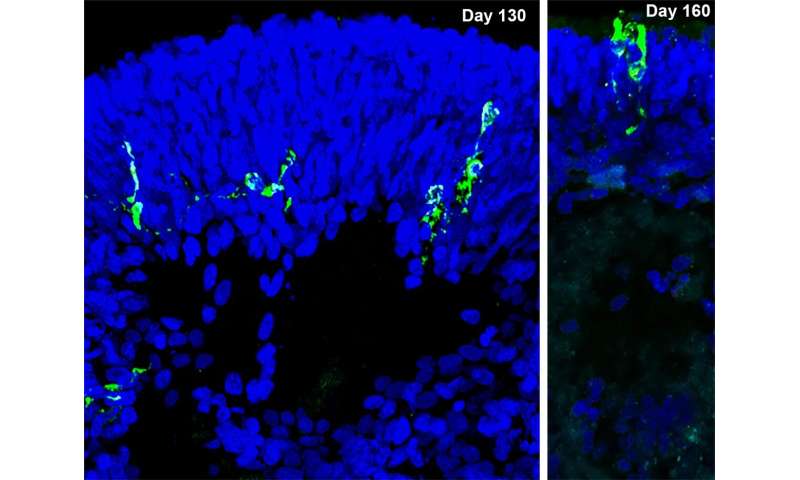 The retinal organoids were incubated with SARS-CoV-2 viruses by André Schreiber and Stephan Ludwig of the Institute of Molecular Virology at the Westfälische Wilhelms-Universität Münster in a safety level 3 laboratory and then analyzed after specified incubation times. Using quantitative PCR analysis, the researchers succeeded in detecting SARS-CoV-2 mRNA in the organoids, indicating that cells in the organoids were indeed infected by the virus.

Furthermore, to measure the active virus concentrations produced by the infected organoids after different incubation times, the researchers used an assay called a viral plaque assay. Indeed, the assay showed that new viral progeny has been formed in the retinal organoids. “This is the first demonstration that SARS-CoV-2 replicates in human retinal cells,” says Thomas Rauen who heads the White Paper Project Group “Brain Organoids: Alternatives to Animal Testing” together with Hans Schöler. “Our MPG-funded project has come to fruition,” he adds delightedly.

To find out which cells in the retinal organoids are affected, the researchers analyzed the organoids under a fluorescence microscope. With the help of different immune markers for the different cell types of the retina and with a fluorescent antibody against the nucleoprotein (N-protein) of SARS-CoV-2, it was shown that mainly two cell layers of the retinal organoids were infected. “For one thing, many of the N-protein-stained cells were in the outer nuclear layer of the organoids,” says Yotam Menuchin-Lasowski. This is the layer that contains the cell bodies of the photoreceptors—the cones and rods that convert incoming light into nerve impulses. “Some of these cells with the N-protein actually had the typical appearance of the light-sensitive cells,” he adds. “However, the cell type in which we most frequently detected the N-protein of SARS-CoV-2 is retinal ganglion cells,” Menuchin-Lasowski says. These cells are located in the most inner cell layer of the retina and transmit all signals from the retina to the brain via the optic nerve.

Interestingly, many of the retinal symptoms associated with COVID-19 are related to retinal ganglion cells, but these have previously been associated predominantly with secondary effects of other SARS-CoV-2-induced disease symptoms, such as damage to blood vessels or an increase in eye pressure. “However, our current retina-organoid study shows that infection with SARS-CoV-2 can have direct pathological consequences for retinal ganglion cells, even though visual impairment is not common in patients with COVID-19,” said Thomas Rauen. “But our data give us reason to believe that so-called long-COVID symptoms may include degenerative retinal disease.”