The rapid transmission of the severe acute respiratory syndrome coronavirus 2 (SARS-CoV-2) led to the development of several vaccines against the virus at unprecedented speeds using both conventional and experimental platforms. Most coronavirus disease 2019 (COVID-19) have proven to be of high efficacy in preventing symptomatic or severe disease, thereby reducing the load on healthcare systems and COVID-19-related mortality.

In a new study posted to the preprint server medRxiv*, researchers describe the state of adaptive immunity following vaccination with the Pfizer-BioNTech BNT162b2 COVID-19 vaccine. 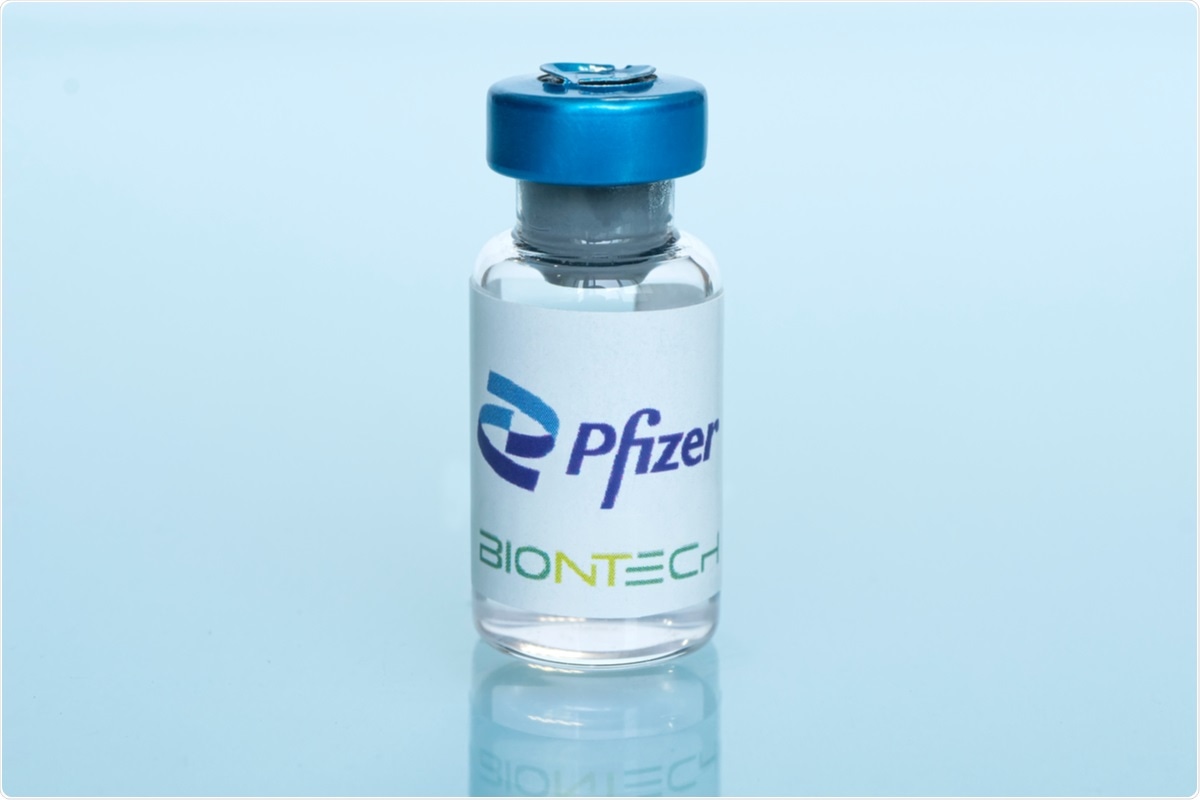 The Pfizer-BioNTech BNT162b2 COVID-19 vaccine is built on a messenger ribonucleic acid (mRNA) platform, which encodes the SARS-CoV-2 spike protein that contains the receptor-binding domain (RBD). The SARS-CoV-2 RBD is the immunodominant antigen that is neutralized by protective antibodies and T-cells following the generation of an immune response. In advanced clinical trials, BNT162b2 was found to have an efficacy of 95% against symptomatic infection.

The real-world efficacy of BNT162b2 against the SARS-CoV-2 Alpha variant was impressive; however, this efficacy was slightly reduced against the Delta variant. Unfortunately, the effectiveness of BNT162b2 is even lower against the currently dominant SARS-CoV-2 Omicron variant, which has led to a rapid escalation in case numbers despite the rollout of vaccines on a very large scale in many countries.

The reason for the lower vaccine effectiveness against these variants is due to the presence of mutations in the spike or RBD protein, which enables the virus to escape binding by vaccine-induced neutralizing antibodies that target epitopes within this region. As a result, the durability of vaccine-induced protection is a question facing active discussion.

Most vaccine surveillance studies are based on antibody detection in serum. However, T-cells specific to a pathogen is known to be persistent for decades after infection or vaccination, therefore, play a key role in sustained immunity.

The researchers found that anti-nucleocapsid (N) immunoglobulin G (IgG) antibodies to the wildtype strain of SARS-CoV-2 were not raised either pre-vaccination or at three months after the second dose.

However, at the second time point, the vaccine-elicited functionally active IgG antibodies to the spike, with a median titer of 27, and all but two had anti-spike IgA response. IgA and IgG antibodies were correlated with each other. All but one of the study participants had three-month anti-RBD IgG titers at a median of 827, though the range was wide.

Circulating B-cells specific to the RBD were also found in about a third of the participants, thereby confirming results from earlier studies. These cells are a proxy marker for resident spike-specific B-cells in the lymphoid tissue, which are key to durable memory B-cell responses. These patients also had high binding and neutralizing antibody titers.

The researchers used T-cell phenotyping as part of the whole blood interferon-gamma release assay (IGRA) to avoid having to isolate peripheral blood mononuclear cells (PBMCs) or use peptide pools to assess T-cell responses to the virus.

Markers of T-cell activation were present, along with the release of type II interferon, thus confirming the presence of a helper T-cell response to the vaccine. This showed both cytotoxic and helper T-cell subsets to be activated specifically by SARS-CoV-2, which indicates that both MHC class I and II proteins were presenting the viral antigens.

In vaccinated participants, the median SARS-CoV-2-specific T -cell-mediated gamma-interferon (IFN-γ) release was 1,520 as compared to a median baseline value of 34.  At three months, this level rose three-fold or more, with 10,000-fold or higher increases reported in some participants.

The researchers found CD40L expression, which is key to both class switching and B-cell receptor affinity maturation. This suggests that re-exposure to the antigen would activate a rapid and large T-cell-dependent antibody response due to memory B-cell recall responses.

A single patient with breakthrough infection in this study had both anti-S and anti-RBD antibodies, a high neutralizing titer, and RBD-specific B-cells that were induced by vaccination.

Post-vaccination, both B- and T-cells were found to be activated by the vaccine. However, the magnitude of each arm of the adaptive immune response was independent of the other.

The findings of the current study suggest that IgA anti-spike antibodies wane faster than the corresponding IgG antibodies, which has been reported by other researchers. In every participant but one, neutralizing antibodies were present that produced complete inhibition of RBD-angiotensin-converting enzyme 2 (ACE2) binding, thereby indicating that BNT162b2 is highly effective at three months from the second dose.

The titers of anti-S and anti-RBD IgG antibodies correlated to the functional antibody activity, with high neutralizing efficacy being observed following double vaccination with the BNT162b2 vaccine. However, these findings were with the wild-type virus.

“In other words, one might show high antibody titers and functional 484 neutralization to the original virus strain that could prove to be biologically less relevant against 485 the mutated target proteins of the emergent VoC.”

RBD-specific B-cells were found in a subset of patients and were linked to the presence of binding, neutralizing, and functional antibodies. The fact that none of these individuals were infected at the time of the second examination suggests that antibody-mediated immunity is still being built up, even at three months from the second dose of vaccine.

The results of this study indicate the possibility of using vaccine recipients as a source of RBD-targeted B-cell clones that can generate strong neutralizing antibodies for therapeutic use. This technique was used earlier with PBMCs isolated from convalescents to yield neutralizing antibodies in late-stage clinical trials or already in clinical use. These include LY-CoV555, REGN10933 and REGN10987, ABBV-2B04, TY027, and 3B8.

Vaccination has also been reported to be associated with specific T-cell responses that result in the release of antiviral IFN-γ at up to three months post-vaccination. The findings suggest that vaccination leads to a robust increase in antibody titers on re-exposure that are triggered by a rapid T-cell-mediated recall response.

However, the small study size precluded any conclusion as to whether one dose of the BNT162b2 vaccine was sufficient to induce a protective immune response in those with a history of natural infection, as all participants were infection-naïve at the time of vaccination.

Further neutralization assays must be carried out using the variant RBDs in order to fully predict the breadth of protective immunity induced by the vaccine.

Longer periods of follow-up will be necessary to explore the durability of vaccine-induced immunity, especially as the pandemic appears to be slowly transitioning to a situation in which SARS-CoV-2 becomes endemic.