The use of a robotic-assisted device to perform transcranial Doppler ultrasound greatly improved the detection of right-to-left cardiac shunts in patients with presumed embolic strokes compared with the current standard of care — transthoracic echocardiography, in a new study. 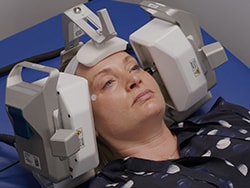 In the study, the robotic-assisted TCD device detected three times as many large shunts that were considered “intervenable” compared with transthoracic echo.

And being far easier to perform than regular transcranial Doppler ultrasound, it’s hoped that use of the robotic device will enable many more patients to undergo the more sensitive transcranial screening modality and increase the number of shunts identified.

Rubin, who is assistant professor of neurology at University of Tennessee Health Science Center, Memphis, presented results of the BUBL study at last week’s International Stroke Conference (ISC) 2022, where they were greeted with applause from the floor.

Rubin explained that patients with suspected embolic stroke are routinely screened for shunts in the heart, such as patent foramen ovale (PFO), that allow blood to flow from the right chamber to the left chamber and can lead to clots from the venous system accessing the arterial system, and then traveling to the brain and causing a stroke.

The current standard of care in screening for such shunts is the use of transthoracic echocardiography (TTE), a widely available and easy to perform, non-invasive procedure. “But we have known for decades that TTE does not pick up these shunts very well. With a sensitivity of only around 45%, it identifies less than half of the patients affected,” Rubin noted.

The more sensitive transesophageal echocardiography (TEE) gives much better results, but it is an invasive and unpleasant procedure with the ultrasound probe being passed down the throat, and the patient needing to be sedated, so it’s not appropriate for everyone, he noted.

“Transcranial Doppler ultrasound (TCD) also gives excellent results, with a sensitivity of about 96% for detecting PFO, but this procedure is difficult to perform and requires a great deal of skill in placing the probes in the right position and interpreting the signal,” Rubin said. “TCD has been around for decades, but it hasn’t caught on as it is too difficult to do. It takes a lot of time to learn the technique.

“With the robotic-assisted transcranial Doppler device, we can achieve the sensitivity of TCD without needing expert operators. This should vastly improve accessibility to this technology,” he said.

“With such technology we can make significant strides into more accurate diagnoses on the cause of stroke, which should lead to better preventive treatments in those found to have right-to-left shunts,” he added.

For the BUBL study, the robotic TCD technique was compared with the standard TTE in 129 patients who had a diagnosis of presumed embolic stroke or transient ischemic attack (TIA), with all patients undergoing both procedures.

The robotic TCD device resembles a giant pair of headphones containing the ultrasound probes, which are attached to a frame. In the study, it was operated by a healthcare professional without TCD skills. Each ultrasound probe independently scans the temporal area autonomously — with angling and positive pressure against the scalp akin to a sonographer — to find and optimize bilateral middle cerebral artery signals, Rubin explained.

However, he said he was not surprised by these results.

“In my experience with transcranial Doppler, I find shunts in patients every day that have not been seen with transthoracic echo,” he commented.

He noted that a previous meta-analysis has suggested a similar difference between TCD and transthoracic echo, but the current study provides prospectively collected data produced in a clinical trial setting and is therefore more reliable.

“What I hope comes from this is that more patients will be able to undergo transcranial Doppler, which is a far superior screening technique for identifying right-to-left shunts. There is so much evidence to support the use of transcranial Doppler, but with this new artificial-intelligence robotic device, we don’t need an expert to use it,” Rubin said.

He explained that finding a right-to-left shunt in stroke patients is particularly important as it can direct treatment strategies to reduce future risk of recurrent strokes.

“If a patient has a large shunt, then they have a high risk of having another stroke, and the PFO should be closed.”

In this study, the robotic-assisted TCD detected three times as many large shunts that were considered “intervenable” compared with transthoracic echo, identifying these shunts in 35 patients (27%) compared to just 13 (10%) with TTE.

Commenting on the study for theheart.org | Medscape Cardiology, Patrick Lyden, MD, professor of physiology and neuroscience and neurology, University of Southern California, Los Angeles, said: “Most clinicians hesitate to use transcranial Doppler given the need for specialized technical expertise to obtain a reliable result. This study showed that a robotic transcranial Doppler device — which can be applied by any cardiac non-invasive lab technician — provides reliable and rigorous data.”

He added: “This result will dramatically change the typical evaluation of patients with suspected PFO: in place of an invasive transesophageal echo that requires anesthesia and a cardiologist, most patients can have a non-invasive, robotic-guided transcranial Doppler and get the same diagnostic benefit.”

Lyden also pointed out that the cost of TCD is typically one tenth that of TEE, although he said the cost of the robotic guided TCD “is not clear.”

A representative of the company that makes the robotic assisted device, NovaSignal, says the cost of the equipment is approximately $250,000, but “understanding the importance of the technology, we work with each hospital to meet their unique needs.”

The company adds that it currently has “over 45 commercial solutions deployed across 25 centers with 3-4 times growth expected year over year.”

The study was supported by NovaSignal, the company which makes the robotic device. Rubin reports acting as a consultant for the NovaSignal.