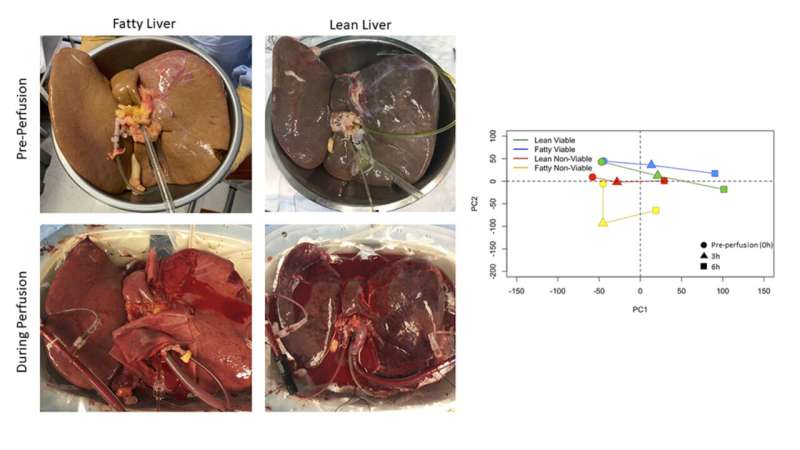 Thousands of livers donated for transplantation are discarded or turned down every year due to concerns about organ quality and function. New insights into why these organs are considered unusable and how they function during external perfusion could help save lives by greatly increasing the number of livers that are transplantable.

After a liver is removed from a donor’s body, it undergoes a process known as perfusion which flows blood or a blood replacement though the organ’s blood vessels to keep them open and active before the transplantation surgery.

“Our new findings will allow us to design therapies that could be used during external perfusion to improve the quality of organs so that these livers can be transplanted instead of being discarded,” said Jennifer Sanders, Ph.D., from Rhode Island Hospital. “This could potentially increase the number of transplantable livers by hundreds to thousands per year.”

Sanders will present the research at the American Society for Investigative Pathology annual meeting during the virtual Experimental Biology (EB) 2021 meeting, to be held April 27-30.

The work was conducted through a collaboration between the Organ Preservation Laboratory in the Center for Engineering in Medicine and Surgery at Massachusetts General Hospital and Sanders’ laboratory in the Department of Pediatrics at Rhode Island Hospital and Brown University. Siavash Raigani, MD, a surgical resident at Massachusetts General Hospital and Anders Ohman, a graduate student at Brown University/Rhode Island Hospital, led the study.

Previous research has studied the function of livers in animals such as mice or rats, but newer machine perfusion technology that keeps livers alive for longer outside the body allowed the researchers to directly study human livers.

“This is the first study to closely examine the gene expression and response mechanisms in a group of human livers undergoing perfusion outside the human body,” said Sanders. “This is a significant advance because it will allow us to more rapidly translate our research findings into usable treatments for patients awaiting organ transplantation.”

For the new study, the researchers perfused 12 human livers with oxygen, blood and nutrients using an external perfusion device that mimics the human body’s circulation. They then compared livers from donors with fatty liver disease to those without.

“When we examined the differences in gene expression during perfusion, we found that both types of livers had similar responses,” said Sanders. “This was unexpected, since the prevailing opinion is that fatty livers behave differently than non-fatty livers.”

The researchers also found that being perfused outside the body introduced injury in the livers that activated self-repair mechanisms that allowed the liver to heal and continue functioning.