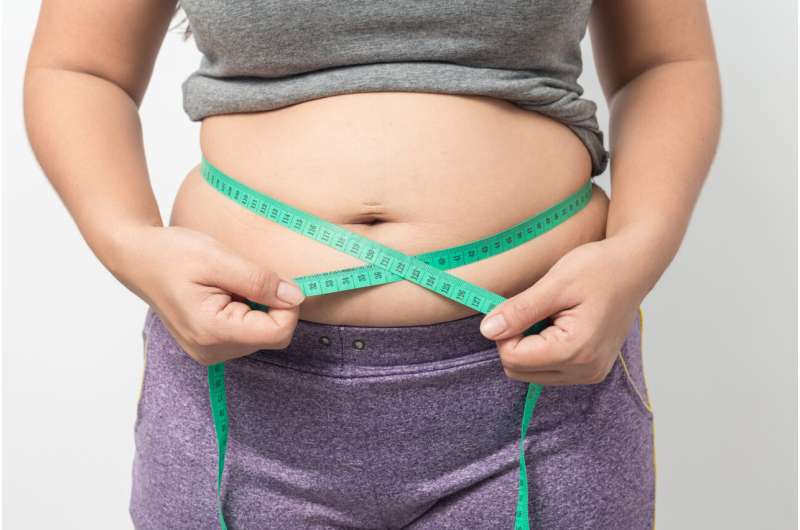 Monash University researchers have shown for the first time that mesenteric (gut) lymphatic dysfunction is a potential cause of and therapeutic target for obesity and insulin resistance.

The groundbreaking study, published in Nature Metabolism, identified a profoundly damaging cycle in which a high fat diet promotes dysfunction of the mesenteric lymphatics, that in turn leads to accumulation of abdominal fat.

Notably, the study also provides evidence that intervening in this cycle by inhibiting the pathways associated with lymphatic dysfunction may be a treatment for both obesity and associated metabolic disease.

Treatment of the mesenteric lymphatic system with a lymph-targeted COX-2 inhibitor was shown to normalize the structure of the lymphatic vasculature, block weight gain and reverse glucose intolerance and hyperinsulinemia—conditions associated with type 2 diabetes.

Leading the study was a team of researchers from Melbourne’s Monash Institute of Pharmaceutical Sciences (MIPS) including Associate Professor Natalie Trevaskis, Professor Chris Porter and Post-Doctoral Research Fellow Enyuan Cao, in collaboration with PureTech Health, a US clinical-stage biotherapeutics company specializing in the discovery, development and commercialisation of highly differentiated medicines for devastating diseases.

As shown through pre-clinical models, a high-fat diet stimulated the formation of new mesenteric lymphatic vessels, which grew in a highly disorganized pattern. These tortuous, branching vessels tended to leak lymphatic fluid, which is rich in gut-derived lipid metabolites and pro-inflammatory mediators, into the visceral adipose tissue in the abdomen, triggering the promotion of insulin resistance.

Associate Professor Trevaskis said: “In this study we were able to uncover for the first time a biological reason behind why the accumulation of fat around the abdomen is correlated with higher rates of metabolic disease such as type 2 diabetes than accumulation of fat in other regions of the body.

“We were able to show that a high-fat diet leads to dysfunction of the mesenteric lymphatics, which in turn promotes more fat deposition around the abdomen and insulin resistance.”

“The results from ex vivo experiments using clinical samples suggest that these observations extend to humans as well.”

Central to the success of the study was the use of PureTech’s GlyphTM prodrug technology platform, which is specifically designed to enable the trafficking of small molecule drugs directly into the mesenteric lymphatic system following oral administration.

The GlyphTM prodrug technology was initially developed by the MIPS team and licensed to PureTech in 2017. MIPS and PureTech scientists have subsequently been working together to further develop the platform.

In the current study the use of the lymph targeting technology was key to the intervention of the cycle in which mesenteric lymphatic dysfunction leads to the accumulation of abdominal fat, since it trafficked the COX-2 inhibitor directly to where it was needed in the mesenteric lymphatics.

Professor Chris Porter said: “By harnessing the GlyphTM technology platform, we now have preclinical evidence that intervening in this cycle by targeted inhibition of the pathways associated with mesenteric lymphatic dysfunction may provide a novel treatment option for both obesity and associated metabolic disease.”

“What’s remarkable about this study is that the COX-2 inhibitor was able to meaningfully repattern the chaotic lymphatic structure in obese mice when it was delivered directly to the mesenteric lymphatics with our Glyph technology platform, and that repatterning was accompanied by a substantial decrease in both weight gain and insulin resistance,” said PureTech’s Chief Scientific Officer, Joseph Bolen, Ph.D.