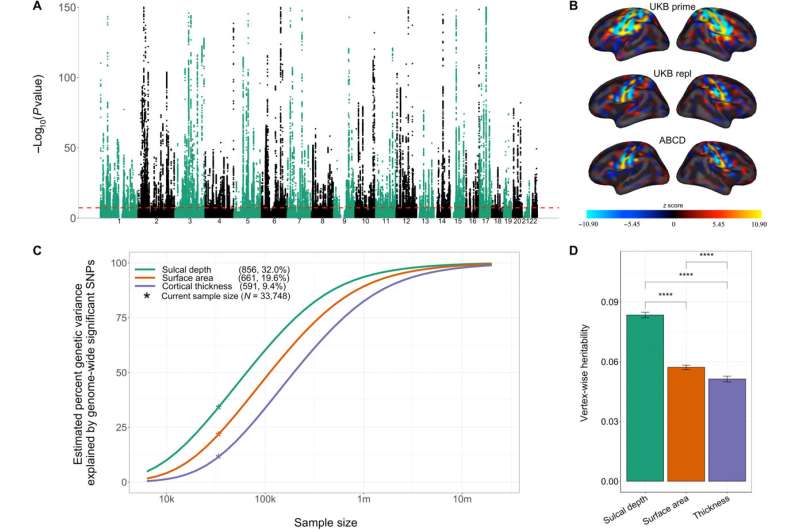 The surface of our brain, the cortex, is folded into an intricate pattern of bumps (gyri) and grooves (sulci). While individual differences in this pattern have been linked to brain disorders and cognitive performance, very little has been known about how the ‘bumpiness and grooviness’ of the cortex is determined. In a study recently published in Science Advances, an international research team conducted the first major genetic study into cortical folding patterns.

The researchers analyzed genetic and neuroimaging data from more than 45,000 people, in the UK and U.S.. Using advanced statistical methods, they discovered and characterized genetic variation linked to the extent of folding, and compared this to findings on the much more commonly studied measures of cortical surface area and thickness.

The investigation showed that cortical folding is substantially more heritable than the two other measures. This contributed to the identification of 856 significant genetic variants, the most discovered for any brain measure in a single study. The associated genes are known to be part of important brain developmental processes, such as neuronal migration, and were found to be expressed primarily before birth. A substantial number of the identified variants had also been previously coupled to a range of brain disorders, attesting to the clinical relevance of cortical folding.

First author Dennis van der Meer explains: “Our findings certainly confirmed our impression that this is an under-investigated brain measure, one that can tell us a whole lot more about the brain, how it develops, and how this shapes our behavior, in health and disease.”