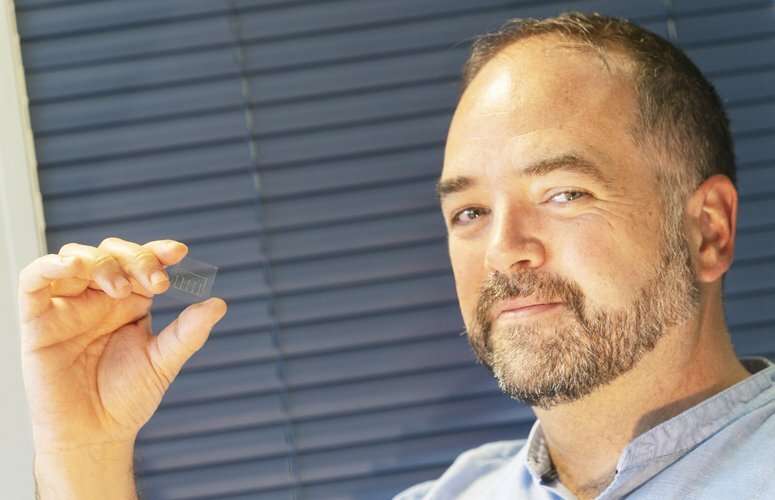 The UPV/EHU’s Microfluidics Cluster has used a custom-made resin formulation coupled with a high-resolution 3D printing methodology for the rapid optimization of modular plasma separation devices working with very small sample sizes. The printing method used demonstrates the huge contribution that this microfluidic technology can make towards the market for biomedical plasma separation devices.

Within the framework of devices of the “lab-on-a-chip” type, which integrate one or more laboratory functions into a single millimeter-sized chip, diagnostic tests to determine biomarkers in blood are being successfully developed. The improvements that microfluidics can bring to medical devices and analysis are hugely significant because they make it possible to work with very small quantities and get the same results.

Three-dimensional (3D) printing has had a significant impact on this field, although the development of fully functional 3D printed microfluidic platforms with built-in components remains a challenge. The UPV/EHU’s Microfluidics Cluster has done its part in this respect.

A major contribution towards the market for biomedical plasma separation devices

“Imagine a channel measuring about five or ten microns,” explained Dr. Fernando Benito-López, one of the cluster’s lead researchers, “whose surface is functionalized with receptors to capture a certain molecule, or biomarker, from the blood and analyze it using fluorescence. Red blood cells would prevent the fluorescence from being seen. So we have created a kind of hole in which the white and red blood cells are removed by gravity; that way, only the plasma passes through the channel, and any interference that might occur in the integrated optical detection system is eliminated. In other words, this module would be positioned in front of the analysis system.”

According to Benito-López, this new system allows the entire process to be integrated into the fluidic device. What is more, the device improves the quality of the analysis, “because it is faster, and there are fewer errors because there is less human intervention.”

The microfluidic device produced to separate plasma from blood easily and reliably has demonstrated the potential of stereolithographic 3D printing technology for microfabrication (laser technology using a liquid resin sensitive to UV light). “An optimal fluidic structure can be achieved much faster than by using conventional methods, such as photolithography,” said Dr. Benito-López.