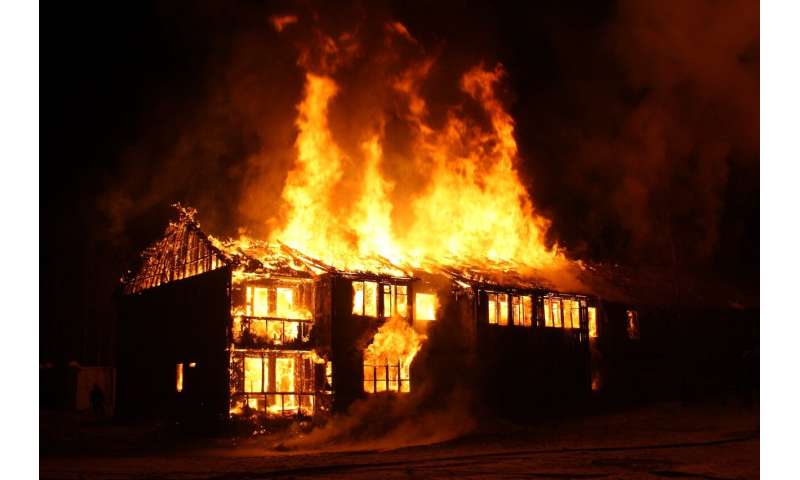 When residential fires happen at night while families are sleeping, deaths are more likely to occur. Smoke alarms are important for preventing these deaths, yet research has shown that many pre-teenage children don’t wake up to traditional high-frequency tone alarms. Researchers from the Center for Injury Research and Policy and the Sleep Disorders Center at Nationwide Children’s Hospital conducted a series of studies to identify smoke alarm signals that would more effectively awaken children and other members of the household in the event of a fire.

In a recent study published online in Pediatric Research, researchers examined four different smoke alarms to determine which ones worked best to wake children from deep sleep and prompt them to perform an escape procedure: a male voice, female voice, combination of a low-frequency tone plus a female voice (hybrid alarm), or high-frequency tone. The research included 188 children age five to 12 years old studied at a sleep research center in Columbus, Ohio. The effectiveness of a male voice alarm had been previously tested among sleeping older adults but not among children.

The researchers found that the male voice, female voice, and hybrid voice-tone alarms awakened 85-89% of children and prompted 84-89% to “escape” from the bedroom, compared with 56% awakened and 55% escaped for the high-frequency tone alarm.

In a real fire, there is a narrow window of time for everyone to get out of the burning building. If a child takes too long to wake up and escape, serious injuries or death could occur. In this study, the median time to escape for the male voice, female voice, and hybrid voice-tone alarms was 12-13 seconds, whereas it was more than a minute and a half—96.5 seconds—for the high-frequency tone alarm. The study authors concluded that there were no significant differences in the effectiveness of the male voice, female voice, or hybrid alarms when compared with each other, and that they all out-performed the high-frequency tone alarm. When used in children’s sleep areas, the male voice, female voice, or hybrid alarms may reduce residential fire-related injuries and deaths among children old enough to perform self-rescue.

“Children are remarkably resistant to awakening by sound when asleep,” said Mark Splaingard, MD, co-author of the study and director of the Sleep Disorders Center at Nationwide Children’s. “Children sleep longer and deeper than adults and require louder sounds to awaken than adults, which means they are less likely to awaken and escape a nighttime home fire. The fact that we were able to find a smoke alarm sound that reduces the amount of time it takes for many children to wake up and leave the bedroom could save lives.”

This was the fourth study in a series looking at children’s responses to various types of non-traditional smoke alarms. The original study in 2006 tested the concept of using the mother’s voice to wake children from deep sleep and prompt their “escape.” It demonstrated that the alarm was effective, but researchers needed to figure out what component of the alarm’s signal was responsible for success: the use of a child’s first name in the voice message, specifically the mother’s voice (vs. any human voice), or the frequency of the signal.

A study published in 2019 tested mother’s voice smoke alarms that did and did not include the use of the child’s first name in the message; these alarms were compared with each other and to a high-frequency tone alarm. Researchers found that a sleeping child was about three times more likely to be awakened by one of the three mother’s voice alarms than by the tone alarm. The median time to escape for the high-frequency tone alarm was 282 seconds—nearly five minutes—while the median times to escape for the mother’s voice alarms ranged from 18 to 28 seconds. Importantly, no significant differences were found between each pair of the voice alarms, regardless of whether the child’s name was included in the message. Therefore, personalizing the alarm message with the child’s first name did not increase alarm effectiveness, which simplifies the development of an effective and practical smoke alarm for sleeping children.

“Our research demonstrates that smoke alarms developed for the unique developmental requirements of sleeping children are also effective among sleeping adults,” said Gary Smith, MD, DrPH, lead author of these studies and director of the Center for Injury Research and Policy at Nationwide Children’s Hospital. “Switching from the use of a high-frequency tone alarms that many people currently have in their homes to a smoke alarm that uses a low-frequency tone, male or female voice, or a voice-low-frequency tone hybrid signal may reduce residential fire-related injuries and deaths among sleeping children old enough to perform self-rescue, while also successfully alerting sleeping adult members in the household.”

Future research will test these children’s smoke alarms to ensure they are effective in waking older adults. However, previous research suggests that they should respond at least as well as adults younger than 65 years of age.