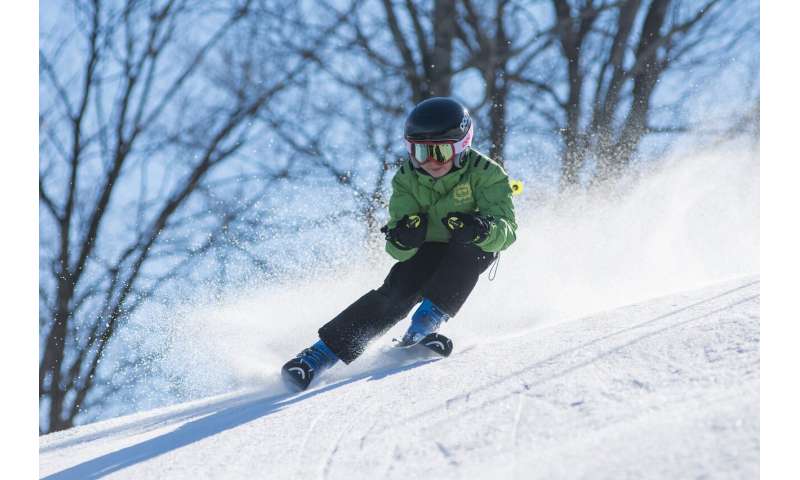 When QBI researcher Dr Will Harrison “stacked it” on a ski slope in Canada, his holiday transformed into a research project in the snow.

Dr Harrison said on shady or overcast days, he found that the visibility of “groomed” ski runs was severely reduced, and suggested that grooming could be done differently to improve visibility.

Grooming has been shown to reduce ski accidents

“For the safety of skiiers and snowboarders, snow at ski resorts is compacted and smoothed in a process called “grooming”, which has been shown to reduce accidents,” he said.

“Grooming results in a pattern of parallel lines in the snow, and we know a lot about how the brain processes these patterns. Grooming has been shown to reduce accidents, but I was interested to test if the particular groom pattern used at my ski resort made it more difficult to see the snow when it is not in full sunlight.

“Contrast is the difference between light and dark regions of an image and the most important factor in determining how well the brain can process patterns of groomed snow. If the snow is shaded or if it’s a foggy day, there’s likely not enough contrast for the brain to process the specific groom pattern used on the slopes.”

Dr Harrison studies visual perception—the brain’s ability to make sense of what the eyes see. When he noticed the visibility problem, Dr Harrison decided to apply his scientific skills to generate alternate groom patterns that may improve snow sport safety.

By using computers to analyse photographs that he took of sunny and shady parts of the slope, Dr Harrison was able to create a model to predict how well the brain could process the groomed snow 10 metres away—a viewing distance relevant to snow sports.

The current grooming pattern improves visibility in the sun, but Dr Harrison found that the patterns were too close together for the brain to process in the shade, because of the reduced contrast.

“If the spaces between the combs were widened in the grooming pattern, I predict a noticeable improvement of visibility in cloudy conditions,” he said.

“Groomed snow does reduce accidents, but I am interested to see if changing the grooming pattern can bring improvements to visibility in less than perfect conditions.

“I’ve shown it works in theory and am keen to work with engineers to try it out in practice.”

Dr Harrison’s day job at QBI involves investigating peripheral (side) vision—researchers are fascinated with why our peripheral vision has such low detail compared to the high degree of detail visible in our central vision.