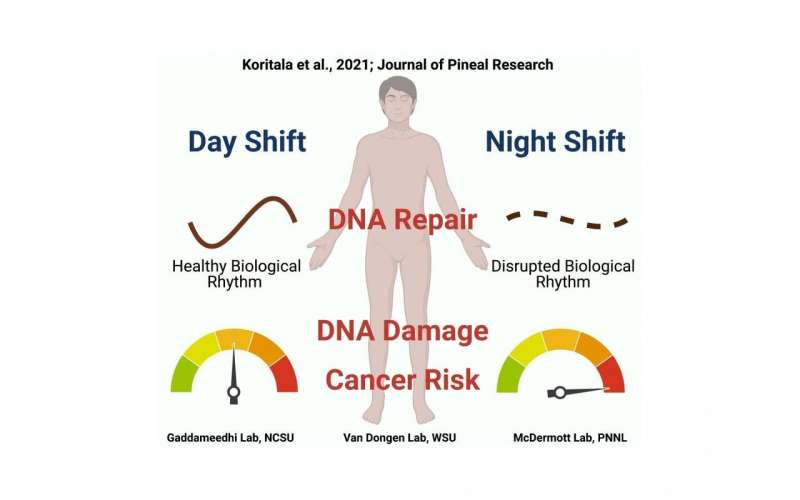 New clues as to why night shift workers are at increased risk of developing certain types of cancer are presented in a new study conducted at Washington State University Health Sciences Spokane.

Published online in the Journal of Pineal Research, the study involved a controlled laboratory experiment that used healthy volunteers who were on simulated night shift or day shift schedules. Findings from the study suggest that night shifts disrupt natural 24-hour rhythms in the activity of certain cancer-related genes, making night shift workers more vulnerable to damage to their DNA while at the same time causing the body’s DNA repair mechanisms to be mistimed to deal with that damage.

Though more research still needs to be done, these discoveries could someday be used to help prevent and treat cancer in night shift workers.

“There has been mounting evidence that cancer is more prevalent in night shift workers, which led the World Health Organization’s International Agency for Research on Cancer to classify night shift work as a probable carcinogenic,” said co-corresponding author Shobhan Gaddameedhi, an associate professor formerly with the WSU College of Pharmacy and Pharmaceutical Sciences and now with North Carolina State University’s Biological Sciences Department and Center for Human Health and the Environment. “However, it has been unclear why night shift work elevates cancer risk, which our study sought to address.”

Studying the rhythms in cancer-related genes

As part of a partnership between the WSU Sleep and Performance Research Center and the U.S. Department of Energy’s Pacific Northwest National Laboratory (PNNL), Gaddameedhi and other WSU scientists worked with bioinformatics experts at PNNL to study the potential involvement of the biological clock, the body’s built-in mechanism that keeps us on a 24-hour night and day cycle. Though there is a central biological clock in the brain, nearly every cell in the body also has its own built-in clock. This cellular clock involves genes known as clock genes that are rhythmic in their expression, meaning their activity levels vary with the time of day or night. The researchers hypothesized that the expression of genes associated with cancer might be rhythmic, too, and that night shift work might disrupt the rhythmicity of these genes.

To test this, they conducted a simulated shift work experiment that had 14 participants spend seven days inside the sleep laboratory at WSU Health Sciences Spokane. Half of them completed a three-day simulated night shift schedule, while the other half were on a three-day simulated day shift schedule. After completing their simulated shifts, all participants were kept in a constant routine protocol that is used to study humans’ internally generated biological rhythms independent of any external influences. As part of the protocol, they were kept awake for 24 hours in a semi-reclined posture under constant light exposure and room temperature and were given identical snacks every hour. Every three hours a blood sample was drawn.

“Taken together, these findings suggest that night shift schedules throw off the timing of expression of cancer-related genes in a way that reduces the effectiveness of the body’s DNA repair processes when they are most needed,” said co-corresponding author Jason McDermott, a computational scientist with the Pacific Northwest National Laboratory’s Biological Sciences Division.

The researchers’ next step is to conduct the same experiment with real-world shift workers who have been consistently on day or night shifts for many years to determine whether in night workers the unrepaired DNA damage builds up over time, which could ultimately increase the risk of cancer. If what happens in real-world shift workers is consistent with the current findings, this work could eventually be used to develop prevention strategies and drugs that could address the mistiming of DNA repair processes. It could also be the basis for strategies to optimize the timing of cancer therapy so that treatment is administered when effectiveness is greatest and side effects are minimal, a procedure called chronotherapy that would need to be fine-tuned to the internal rhythms of night workers.

“Night shift workers face considerable health disparities, ranging from increased risks of metabolic and cardiovascular disease to mental health disorders and cancer,” said co-senior author Hans Van Dongen, a professor in the WSU Elson S. Floyd College of Medicine and director of the WSU Sleep and Performance Research Center. “It is high time that we find diagnosis and treatment solutions for this underserved group of essential workers so that the medical community can address their unique health challenges.”