Air hostess, 25, whose psoriasis was so bad people thought she was a BURNS victim claims she cured her red and flaky skin by ditching dairy and red meat

An air hostess who was mistaken for a burns victim due to a rare skin condition has made a dramatic recovery after ditching dairy and red meat.

Georgia Robinson, 25, suffers from severe psoriasis which left her covered head-to-toe in a red, flaky rash that flared-up for the first time three years ago.

She became suicidal after being stared at by strangers in the street who hurled insults at her and called her ‘contagious’ on a daily basis.

But Ms Robinson, from Birmingham, claims her skin totally cleared after she gave up dairy and red meat last month. 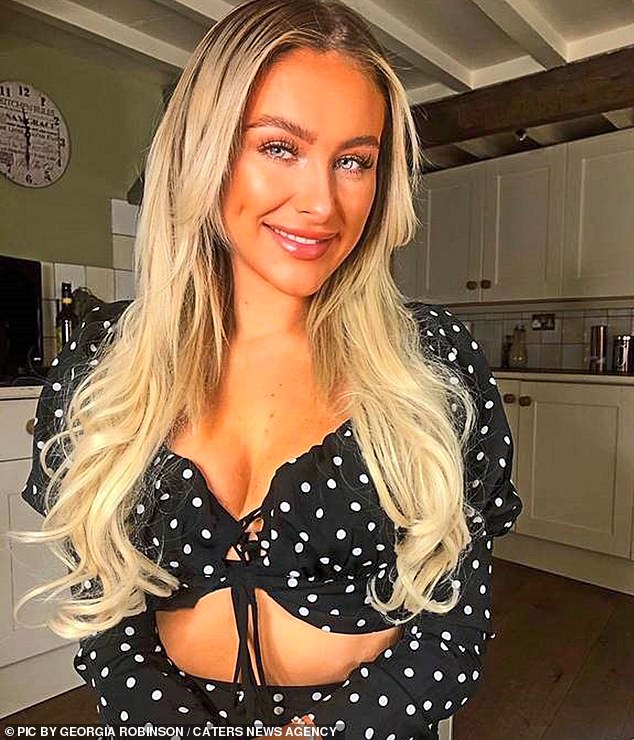 Georgia Robinson, 25, has given up dairy and red meat after suffering from severe psoriasis three years ago 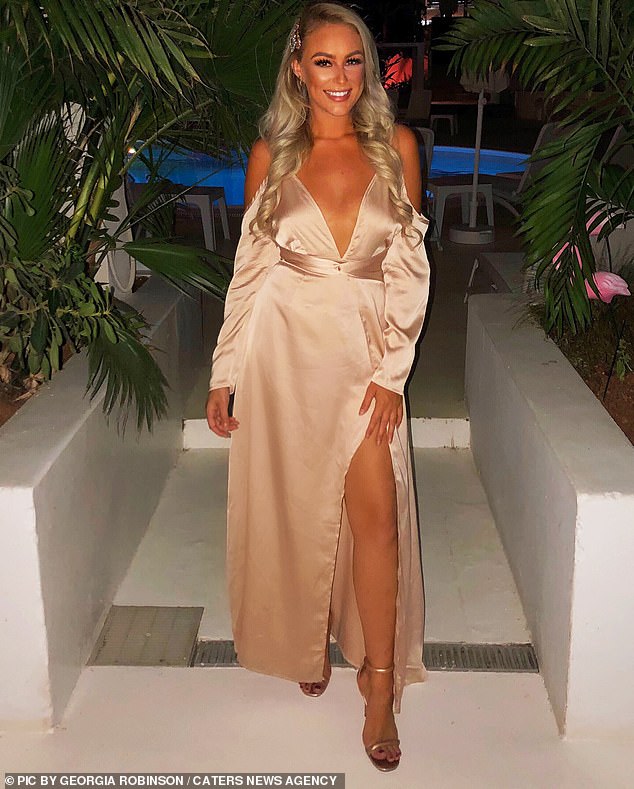 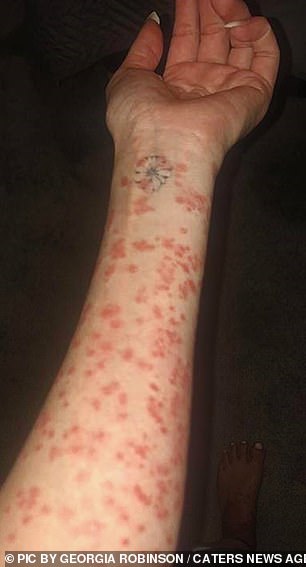 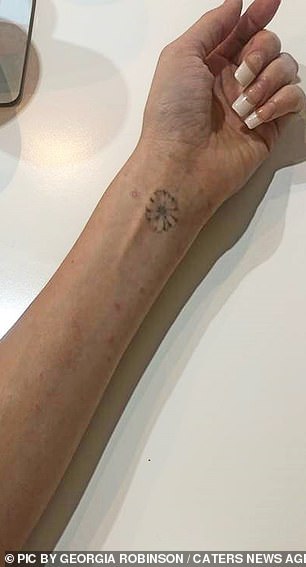 Her arm was red, crusty and itchy during particularly bad flare-ups (left). But Ms Robinson’s skin has cleared after changing her diet (right) 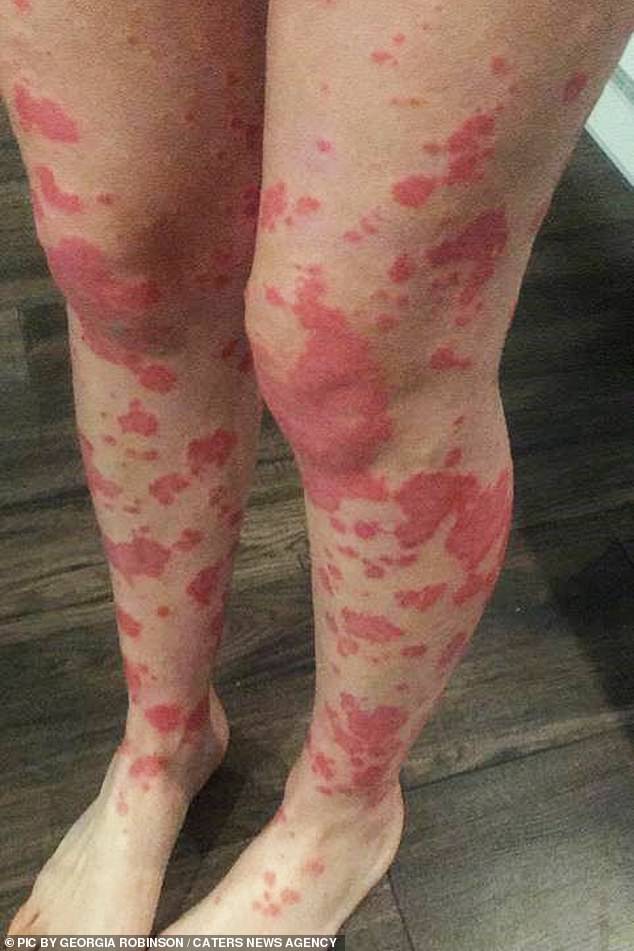 Red meat and dairy, especially eggs, contain a polyunsaturated fatty acid called arachidonic acid which has been shown to cause psoriasis sufferers to break out in sore blotches (Ms Robinson’s legs at her lowest point)

She said: ‘It started as tiny little dots on my elbow, barely even noticeable but within the space of a few months I was covered from head to toe and it became a serious problem.

‘My hands and legs were always the worst and it looked like red strawberries had been thrown at me and left stains.

‘It started to ruin my life and really take its toll on me, I lost so much confidence and everything began to go downhill.

‘I was constantly being asked “what’s happened to your skin?” or “is it contagious?”, and “why are you covered in bites?”

‘But the worse was when someone asked if I had been in a fire, I can’t even describe how hurt I felt.’

Ms Robinson was forced to quit her job because her condition plunged her into depression and she refused to leave her room.

She added: ‘It even got to the point where I would have suicidal thoughts because I felt so low.’

Psoriasis affects around 650,000 people in the UK, including former Oasis frontman Liam Gallagher. 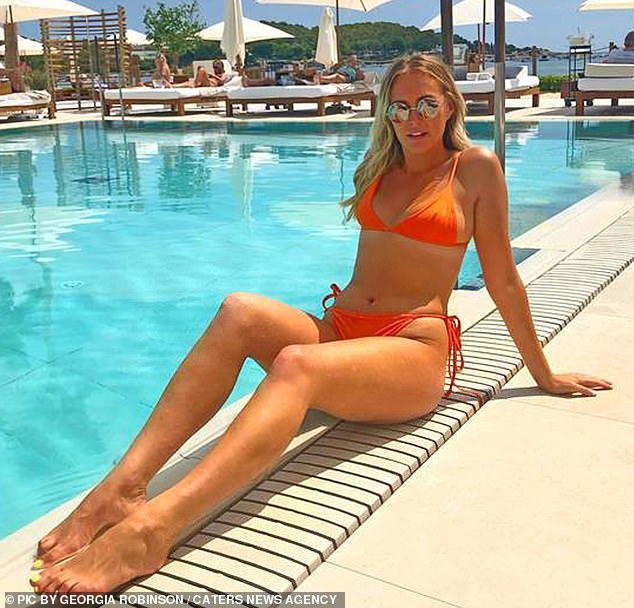 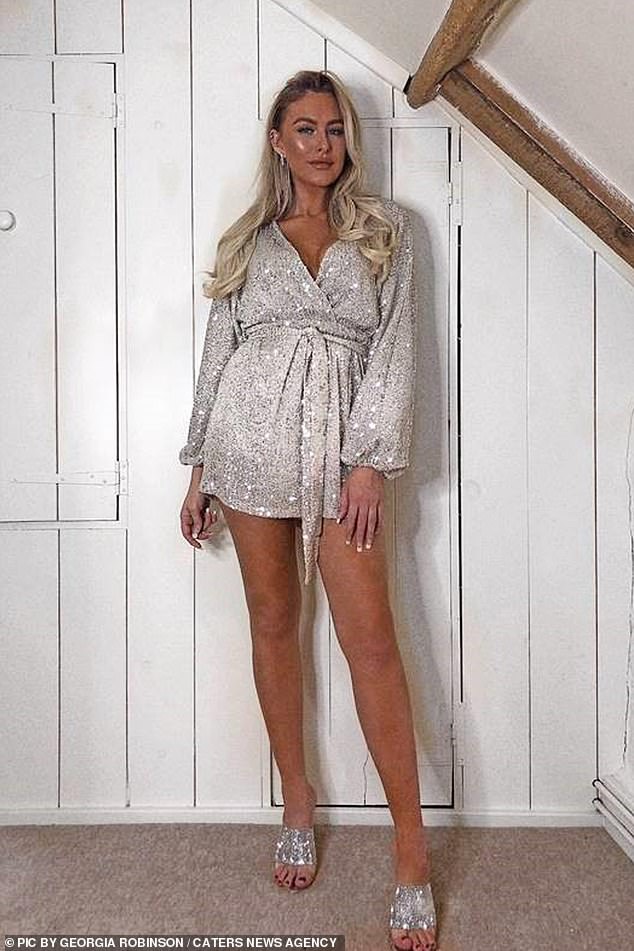 Psoriasis is an autoimmune condition that affects the skin and sometimes the joints.

Around two per cent of people in the US and UK suffer from the condition.

Psoriasis occurs when a person’s skin replacement process takes place within days rather than the usual 21-to-28 days.

The accumulation of skin cells builds up to form raised plaques, which can be flaky, scaly and itchy.

Psoriasis arthritis can occur in the joints near affected skin, causing them to become tender, swollen and stiff.

Anyone can suffer, but psoriasis is more common in people in their late teens-to-early 30s or those between the ages of 50 and 60.

Psoriasis’ cause is unclear. Flare-ups can be triggered by stress, skin injury, hormonal changes and certain medications.

It is not contagious and there is no cure.

According to The Nation Psoriasis Foundations, more than 8million Americans are affected.

It occurs when a person’s skin shedding process takes place within days rather than the usual 21-to-28 days. It causes the skin to break out in red, crusty patches, known as plaques.

The condition’s cause is unclear, but flare-ups can be triggered by stress, hormonal changes, medications and certain foods.

Past research has shown that by-products of arachidonic acid may play a role in creating psoriatic lesions.

Ms Robinson ditched the foods after doing a bit of home researching out of desperation last month.

She claims her skin has never looked better and has posted before and after photographs to her Instagram, which boasts 11,000 followers, in a bid to raise awareness of psoriasis.

She added: ‘I strongly believe my skin has improved because of my diet and I’m much more healthier now. It isn’t not easy, but it seems to be working for me.

‘I shared the post on Instagram because I believe there’s not enough awareness regarding psoriasis, I didn’t know what it was either until I had it.

‘I want people to hear my story and to be kinder to others. I used to let it get me down and I never wanted to leave my bedroom but now I have embraced it and won’t let it stop me from doing anything.

‘I worked in Ibiza during the summer and was constantly in a bikini which came along with plenty of looks, stares and nasty comments unfortunately and it wasn’t easy.

‘I honestly think the less you worry about it easier said than done and the more you look after yourself it will go away.’