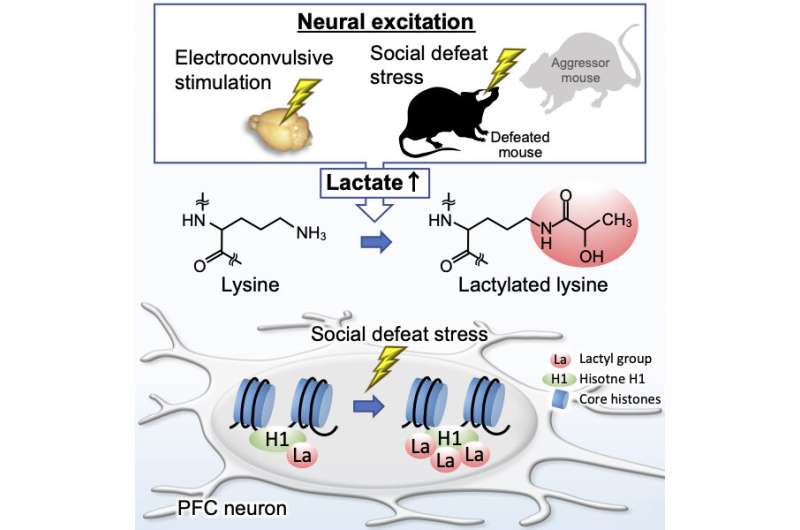 Being bullied leaves a biochemical footprint in the brain. Protein lactylation is a very recently discovered post-translational modification of protein that involves the addition of a lactyl group to lysine residues. Researchers at the Institute for Comprehensive Medical Science at Fujita Health University in Japan, along with colleagues from Ibaraki University and the Japanese National Institute of Advanced Industrial Science and Technology, have now revealed in mice that protein lactylation occurs in neurons in the brain and is positively correlated with lactate levels. This modification was enhanced by neural excitation and social stress, processes known to increase lactate. The stress, from exposure to aggression, specifically enhanced lysine lactylation of histone H1 proteins. The study was published on October 12th in the journal Cell Reports.

Lactate (lactic acid) is an end-product of the glycolytic pathway, the rate of which increases along with energy demand. Bodily lactate concentrations, including in the brain, are enhanced after exercise but also in relation to other conditions. Enhanced levels of brain lactate have been observed in multiple neuropsychiatric disorders, including schizophrenia, bipolar disorder, major depression, and anxiety disorders.

Recent research discovered lysine lactylation as a novel post-translational modification in macrophages that can be stimulated by lactate. The Japanese researchers were interested in whether protein lactylation also occurs in brain cells.

By biochemistry, cell culture, histology, and mouse behavior experiments, the researchers demonstrated neural activity-dependent protein lactylation in neurons in the mouse brain. In vivo, the brain region in which this could be unequivocally established was the prefrontal cortex (PFC). Protein lactylation in the PFC was enhanced after increases in lactate (by intraperitoneal lactate injection), electrical stimulation (by electroconvulsive treatment), anxiety (by exposure to a new open environment), and social stress (by exposure to aggression). The PFC is a brain region involved in top-down control of behavior and emotions.

“Interestingly, this kind of stress increased brain lactate levels as well as anxiety-like behaviors even after the end of the exposure to the stress, which may cause a decrease of brain pH, a common characteristic among animal models of multiple neuropsychiatric diseases,” explains Professor Tsuyoshi Miyakawa, the corresponding author of the study. “Lactate is believed to have an antidepressant effect, and the chronically increased brain lactate levels may form a compensatory mechanism against stress.”

By employing mass spectrometry, the researchers identified 63 lactylated proteins in the mouse PFC. Among these proteins, lactylation of H1 histones was significantly upregulated after exposure of mice to aggression. Super-resolution imaging with stimulated emission depletion (STED) microscopy revealed that the stress increased lactylation of histone H1 in the nuclei of neurons, but not astrocytes.