Going vegetarian may be considered healthier and better for the environment – but it could make you more muscular, too.

Scientists claim protein from Quorn is better for building muscle than protein from dairy sources, such as whey or casein powders.

Men given a substance called mycoprotein, which comes from fungi and is the base of the popular meat substitute, built muscle faster.

Researchers believe the fact mycoprotein is more of a ‘complete’ food than isolated dairy protein may help the body use it more effectively.

The team from the University of Exeter also suggested that it may have more useful components. 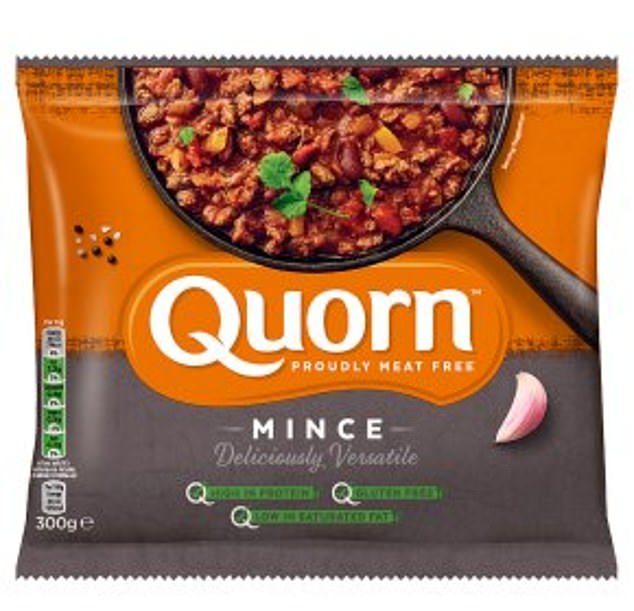 Quorn is made from mycoprotein, which comes from a type of fungi found in soil called fusarium venenatum, which researchers claim is better at rebuilding muscle than dairy protein, which is a popular supplement for people who want to get fit

People wanting to build their muscles after working out have to eat a large amount of protein to help their body recover.

Around a third of protein eaten in the UK comes from meat or dairy, making this finding ‘encouraging’ for athletes looking for a meat-free alternative, scientists said.

The researchers conducted a small study on 20 men to compare dairy protein to mycoprotein.

Each of the men, who were all fit and healthy, did a weightlifting exercise with their legs. They drank one of two types of protein and had their muscle-building tracked.

They had either water with mycoprotein or water with an isolated protein made from around 80 per cent casein and 20 per cent whey from milk.

The rate of muscle growth was measured by tracers inside the proteins which were examined in biopsies of the men’s muscles throughout the study. 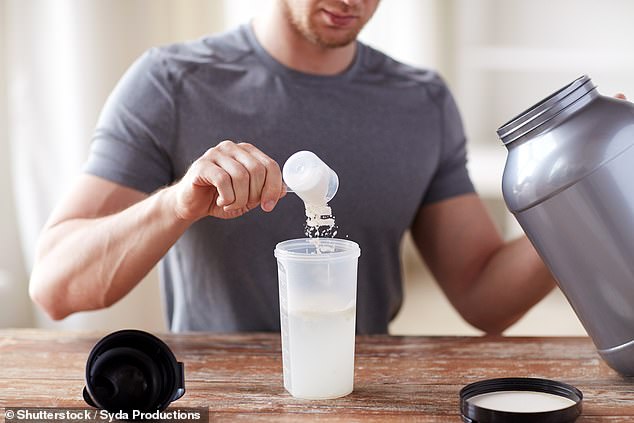 After drinking the mycoprotein supplement, muscle growth was found to be more than 120 per cent faster than without any added protein.

Meanwhile, growth was just 60 per cent faster if the men had been given the dairy protein, which are the most popular form of protein shakes.

Dr Benjamin Wall, a professor of nutritional physiology at the University of Exeter, said the findings were ‘encouraging’.

He told MailOnline many people want non-animal derived sources of protein to build muscle, amid a growing veganism movement.

WHAT IS PROTEIN AND WHY’S IT SO IMPORTANT?

Proteins break down into amino acids which are essentially the building blocks of cells and create solid parts of living organisms.

In the human diet, protein is a source of around 10 to 15 per cent of the body’s energy and is the second most common compound in the body, behind water.

Proteins are vital for life and play a role in almost everything, including growth and repair of muscles and other tissues, controlling chemical signals in the brain, fighting off illness, sending messages to vital organs and making the body move.

Around 43 per cent of the body’s protein is in muscle and large proportions are also in skin (15 per cent) and blood (16 per cent).

According to the British Nutrition Foundation, adults should eat at least 0.75g of protein each day per kg of body weight.

This is equal to 56g per day for someone who weighs 75kg (11st8lbs) – about the amount found in two chicken breasts.

People who are active need to eat more because protein is vital for repairing muscles and recovering from exercise.

‘Our data show that mycoprotein can stimulate muscles to grow faster in the hours following exercise compared with a milk protein,’ Dr Wall said.

However, someone would have to eat almost 150g of Quorn to get the same hit of protein as they’d get from a shake, which usually give you about 21g of it.

Dr Wall added he had expected the opposite to be the case because mycoprotein typically takes longer to get into the bloodstream.

Mycoprotein is made by fermenting a soil fungus called fusarium venenatum.

It contains some fat, carbohydrate and other ‘micronutrients’, which could make it easier for the body to use than isolated protein from dairy, Dr Wall said.

He also suggested that the range of amino acids – basic building blocks for the muscles – may be different in mycoprotein, and potentially more useful.

Protein is vital for muscle-building because when muscles are overworked in exercise they tear and break up.

Protein provides the building blocks for these broken sections to be repaired and added to to make them bigger and stronger than before.

An average adult should eat 0.75g of protein per kg of body weight as a baseline, according to the British Nutrition Foundation.

This is equal to 56g per day for someone who weighs 75kg (11st8lbs) – about the amount found in two chicken breasts.

But active people need more to help their body recover after exercise, with those trying to build strength or muscle in need of the most.

Dr Wall, who presented the findings at the European College of Sport Science conference, added the findings must be tested on more people for a longer period.

In this study the men were examined for six hours overall – for two hours before exercise or protein, then for four hours after the workout and drink.

Tim Finnigan, chief scientific adviser for Quorn Foods, said: ‘In a world where many people are trying to cut back on their meat consumption, either for environmental or health reasons, we’re happy to be able to offer an alternative protein that can provide exceptional nutrition and muscle growth, all while being meat-free.’