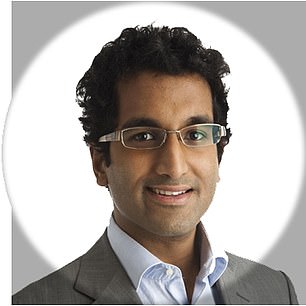 A prominent paediatrician has slammed the appalling rate of suicide among doctors.

Dr Zeshan Qureshi, 33, claims doctors are twice as likely to take their own lives as a non-medic – a fact few take seriously.

Working as a paediatrician, Dr Qureshi has tragically gone to the funerals of many sick youngsters, but has also mourned the loss of colleagues who passed away from suicide.

Speaking at a TED talk, the medic added: ‘If there was a drug that doubled the rate of suicide it would be a scandal. It would be taken off the market immediately.’

But doctors taking their own lives is just the ‘tip of the iceberg’, with many experiencing everything from depression and anxiety to post-traumatic stress disorder (PTSD) and drug addiction as a result of their grueling workloads.

Dr Quresh recalled watching a colleague work a 72-hour shift with just six hours of respite – where she was forced to sleep on a hard floor.

The medic himself admits to being so overworked he fell asleep at the wheel after a night shift, but was forced to try and save the life of a toddler who was not breathing just hours before.

Dr Qureshi – who is also a representative of the Royal College of Paediatrics – graduated with a distinction in medicine from Southampton University in 2009.

He is signed up to a training programme that means he is based in London but changes hospital every six months.

Speaking of when he applied for his university course, Dr Qureshi told MailOnline: ‘When you’re 17 you think of medicine as a privilege that everyone wants to do if chosen for it.’

But once qualified, Dr Qureshi began to understand the pressure medics are under, with him ‘regularly’ arriving at work early, leaving late, skipping breaks, not eating – and even going all day without a drink.

As well as being exhausted, the emotional turmoil of caring for sick patients, particularly children, takes a real toll on a doctor’s mental health, Dr Qureshi claimed.

‘I’ve seen two babies die in just one day,’ he said. ‘The families aren’t going back to work the next day and nobody would ask them to.

‘After that shift I had no space to grieve. I went on to six further night shifts.’

Unable to cope, Dr Qureshi’s mental health took a battering following the death of his father and the emotional turmoil of caring for sick newborns.

‘You’d think having the knowledge of mental health means you can spot it straight away but doctors are trained to be the healer and you forget you’re vulnerable to the same pressures,’ he said.

Although Dr Qureshi is emotionally stable following a short course of counselling, he felt unsupported at work and wants to see therapy offered to doctors as standard.

‘People told me to turn my emotions off a work,’ he said. ‘They presented it as a choice between being human and being a doctor.

As well as doctors themselves suffering from their overwhelming workloads, Dr Qureshi stressed medics cannot properly care for patients if their own wellbeing is compromised.

‘Burnt out staff leads to decreased quality of care,’ he said. ‘We need healthy doctors to have healthy patients.’

To combat the NHS’ understaffing problem, Dr Qureshi is calling for more medics to be hired, as well as better working conditions.

He also wants to see hospitals paying for emergency cover and universities opening up more spaces for people to study medicine.

And finally – Dr Qureshi is urging doctors to look after themselves and speak up if it all gets too much.

For confidential support call the Samaritans on 116123 or visit a local Samaritans branch, see www.samaritans.org for details.

Official figures showed in February that 41 per cent – around 10,000 doctors – are 50 or over and are expected to quit within the next five to ten years.

The shortage of doctors comes despite the NHS adopting a plan in April to recruit 5,000 extra GPs by 2021.

Mr Hunt’s pledge of £2.4 billion was said to be the answer to the staffing shortage, helping plug the growing number of vacancies.

This money was devised to lure GPs to move to the worst-hit areas of England, and to stop them from seeking another career.

Thousands of new ‘doctors on the cheap’ are also being trained to prop up the cash-strapped NHS, it emerged in June.

An army of ‘physician associates’ will work in GP surgeries and hospitals to diagnose patients, recommend treatments and perform minor procedures.

Scores of practices also believe they are working well beyond maximum capacity – feeling pressured to take on a higher workload and risk mistakes.