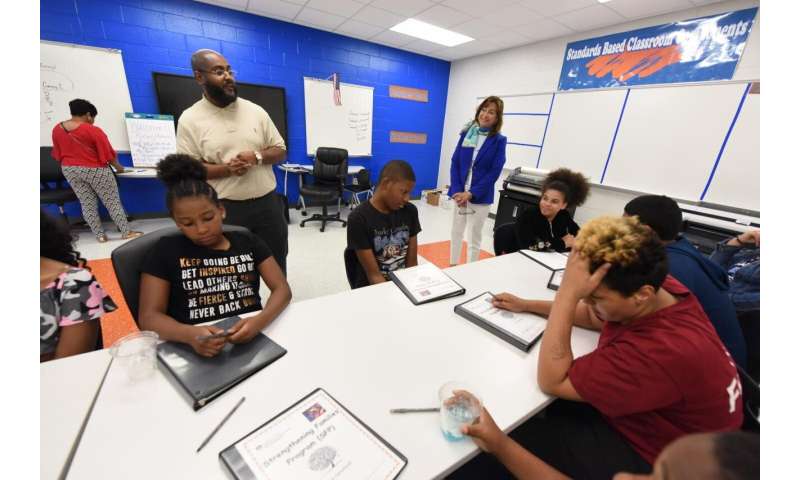 The bottom line is to help children grow up safer and healthier and to increase parents’ ability to help them do that, says the investigator leading a $1.4 million state-funded alcohol and substance abuse prevention program.

Investigators at the Medical College of Georgia and Georgia Cancer Center are working with Augusta area schools to prevent or reduce use of two major substances abused by children: alcohol as well as e-cigarettes, whose use by teens is reaching epidemic proportions, according to the Food and Drug Administration.

“We are focusing on alcohol and electronic cigarette use, but more broadly we are working to prevent children from taking up any type of substance abuse, and to help parents better understand the importance of behaviors they are modeling at home,” says Dr. Martha S. Tingen.

It’s a definite battle, with 1 in 5 middle and high school students using some sort of tobacco product and e-cigarettes now at the top of their list.

“The Centers for Disease Control and Prevention tells us the efforts to prevent youth taking up smoking have been erased with the onset of e-cigarettes,” says Tingen, Charles W. Linder Chair in Pediatrics at MCG and associate director for cancer prevention, control and population health at the Georgia Cancer Center at Augusta University.

Children don’t think e-cigarettes are harmful, she says, but the increased vulnerability of the developing adolescent brain to nicotine addiction has groups like the Food and Drug Administration and Office of the U.S. Surgeon General concerned.

They ask children questions like when was the first time they remember drinking alcohol, whether they thought it was OK for children their age to drink, and what risks they associate with marijuana use. The questionnaires are anonymous and children only answer questions they feel comfortable answering, Tingen notes

Investigators take what they learn from the students to also develop a targeted, positive social norms campaign for their school, which generates slogans like: “91% of Murphey Middle School Students DO NOT VAPE,” rather than focusing on the inverse fact that 9% of the children at this inner city middle school do use e-cigarettes.

To further instill a sense of ownership and pride, the children have major input into what the posters, which hang in their school hallways, look like. Billboards carrying similar community specific messages like “Most Youth Say No to Alcohol. Stay in the majority,” also are strategically placed around town.

Fifteen families at a time go through the 10-week program, and afterward investigators will ask parents about the changes they see in their children.

But it all starts with each family having dinner together, says Tingen, repeating a National Institute on Drug Abuse statistic that families that have just one meal together a day—with phones down, televisions off and instead direct conversation with each other—prevents up to 80 percent of any type of drug use. A host of other benefits also are associated with this dwindling family tradition including better school grades, nutrition and family relations.

After their meal, children and parents migrate to separate rooms to talk more and learn with their peers. 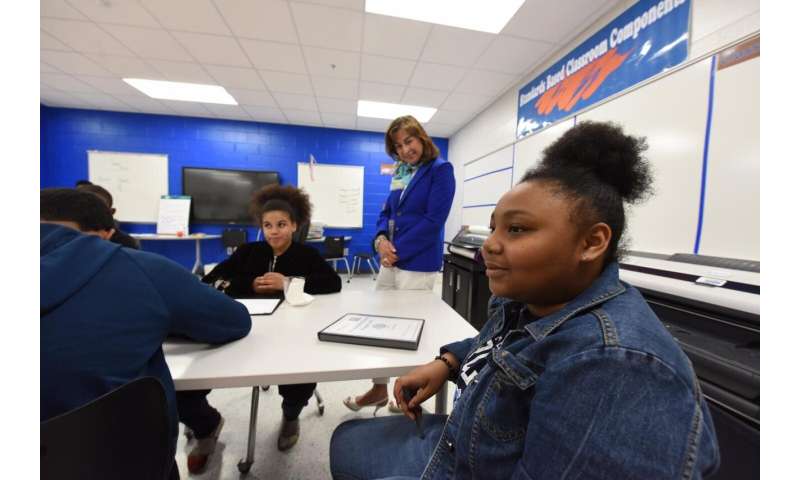 It appears to be a win-win. Quiantanna Beard of Augusta and her daughter Cahaydrienna Rivers, 16, had already gone through the program, but on a recent Tuesday were back along with Ms. Beard’s sons, Tavarus Smalley, 14, and Javieon Beard, 11, as well as stepdad Jeff Montgomery.

The program is helping strengthen her family and solidify valuable parenting lessons for her, the mom says. Her lessons include learning more about the importance of listening to her children, whom she already categorizes as “wonderful.” She also has learned to help herself and her children better deal with difficult situations at school, rather than getting angry herself and “going straight off.”

She likes that in their sessions, everyone has a say, so everyone can learn better from each other both what and what not to do. She also likes how the program will help her children never start habits like drinking alcohol or cigarettes of any kind. The mother has smoked herself for two decades, and wants to quit—which the program can also help her do.

Because to help parents achieve goals for themselves as a role models, the investigators are helping with referrals to groups like Alcoholics Anonymous and even provide transportation to smoking cessation classes at the Georgia Cancer Center for those who need it.

The popularity and pride of the program doesn’t stop with Ms. Beard’s family. You can hear the hum of conversation as the families enjoy dinner together, then see children’s hands go up eagerly to answer questions in their sessions. One student even asked if their participation in the program could be recognized at the school’s Honors Day.

It’s all about bringing home, school and community together, says Regena Jennings, family facilitator at Murphey Middle School. The Strengthening Families Program, as the name implies, definitely brings families together, she says, as children learn more about dealing with tough issues like peer pressure and parents learn how to talk to their children like children rather than like a friend. Families that go through a program together also develop a lasting kinship.

“The kids develop a bond and a friendship so they protect each other inside the school, and outside the school the parents become friends,” Ms. Jennings says. She has watched the children take the lessons they learn to heart; watched them become more focused, respectful and well behaved.

“We want the children to know that they are only limited by what they can dream, but to do that takes commitment and dedication to making decisions that have good consequences, not decisions that end in jail,” adds Tingen.

While their focus right now is middle-schoolers, kids about ages 11-14 in the Georgia counties of Richmond, Columbia and McDuffie, the team may soon take the program into elementary schools as they move across the five years of the grant, Tingen says. While school is out for the summer, they will be taking the program to Augusta’s Good Shepherd Baptist Church.

The NIDA describes e-cigarettes, also known as vapes and hookah pens, as battery operated devices that often contain nicotine, along with flavorings and other chemicals. There are now more than 460 brands of e-cigarettes, which are teens most commonly used form of tobacco.

Last September the FDA announced it was issuing more than 1,300 warning letters and civil money penalty complaints to retailers who illegally sold JUUL and other e-cigarette products to minors nationwide over the summer of 2018, calling the sale and marketing to children a “clear and present danger.”

The 10-week program funded by Tingen’s grant from the Georgia Department of Behavioral Health, Developmental Disabilities and Addictive Diseases Office of Preventive Services, is based on the Strengthening Families Program.