High doses of a nutrient found in meat, eggs and fish may protect multiple generations against Alzheimer’s disease, study finds

These foods are all rich in a brain-boosting nutrient called choline, which helps to protect the brain from neurotoxins and boosts the brain’s ‘self-cleaning’ functions.

Scientists at Arizona State University (ASU) found that when pregnant mice bred to have an Alzheimer’s-like disease at high-choline diets, their offspring were less at risk for the brain disease.

What’s more, the supplementation seemed to alter the offspring mice’s genes in a way that was passed down to have protective effects for future generations, showing unexpected promise for reducing the long-term burden of Alzheimer’s disease. 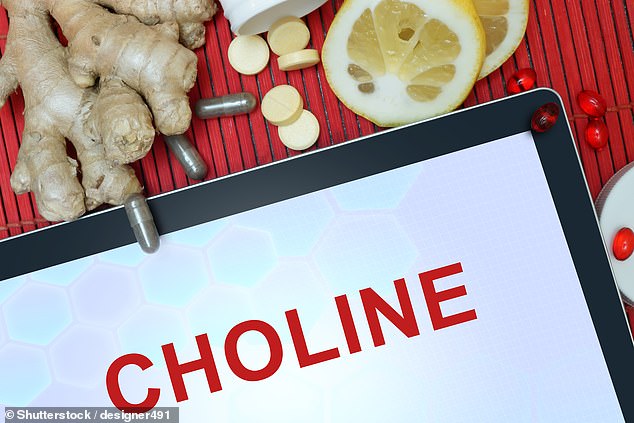 Eating a high-choline diet may cause genetic changes that protect two future generations from Alzheimer’s disease, a new study suggests

Scientists around the world are racing to find a way to reduce surging rates of Alzheimer’s disease and deaths from the debilitating form of dementia.

There is currently no cure, and treatments are limited.

We have begun to learn more about what is actually happening in the brain and what some of the contributing genetic, environmental and biological factors are.

But that has done little to help scientists fight the symptoms or incidence of the disease or keep it from being passed on to future generations.

The latest experiments from ASU may help researchers to do all of the above.

Led by Dr Ramon Velasquez and Dr Salvatore Oddo, a group of neuroscientists specializing in neurodegenerative diseases (like Alzheimer’s) tried feeding pregnant mice bred to have an Alzheimer’s-like dementia a high-choline diet.

They kept the mice on these diets throughout pregnancy and through breastfeeding.

It protected pups receiving extra choline in the womb and during breastfeeding – as well as their subsequent offspring.

The second generation of mice were never even exposed to choline supplements, but still showed improved memory, indicating that their grandparents’ diets had altered their genes and those of future generations.

The remarkable discovery reported in Molecular Psychiatry may lead to choline supplements being advised for pregnant women, in particular.

It also makes them an attractive potential therapy for Alzheimer’s patients as the nutrient is very safe, compared to many drugs.

Plus, a bottle of choline supplements can be purchased for as little as $7.00.

It takes about nine times the recommended daily dose to produce harmful side effects.

Choline is used by the body to produce acetylcholine, an important neurotransmitter essential for brain and nervous system functions.

These include memory, muscle control and mood. The nutrient also plays a vital role in regulating gene expression. 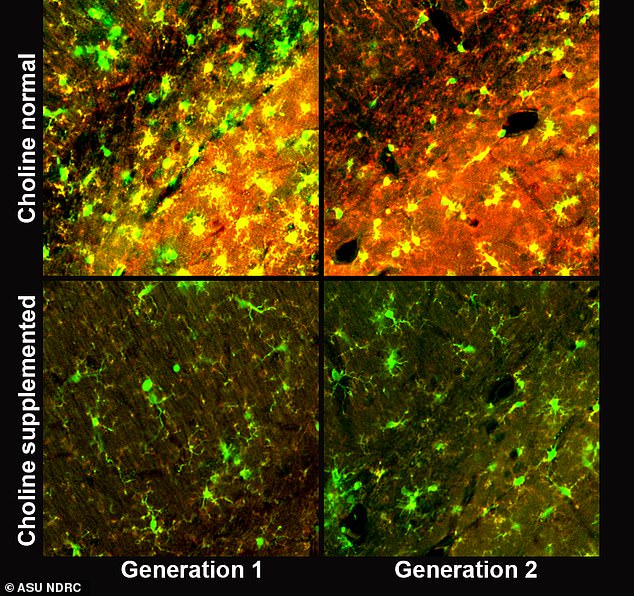 In both the first and second generations (left and right) after the mice that had extra choline (bottom) in their diets, scientists could see dramatic reduction in harmful overactivity in brain cells, compared to mice whose parents and grandparents had regular diets (top)

It has long been recognized as vital in early brain development and expecting mothers are supposed to consume 550mg a day to ensure the health of their baby.

But most don’t, says Dr Velasquez.

‘Studies have shown about 90 percent of women don’t even meet that requirement,’ he explained.

‘Choline deficits are associated with failure in developing fetuses to fully meet expected milestones like walking and babbling.

‘But we show even if you have the recommended amount, supplementing with more in a mouse model gives even greater benefit.’

The offspring mice that had been fed the high-choline diet were much more adept at remembering how to plot their way around water mazes.

When the scientists examined the tissue of these mice’s hippocampus – a key area to memory formation – they saw that the same anti-neurotoxic and inflammation effects they knew were tied to choline supplements were also present in the next generation.

Previous research has found people who get plenty of choline in their diets perform better on memory tests, and are less likely to show brain changes associated with dementia.

Dr Velazquez said: ‘No one has ever shown transgenerational benefits of choline supplementation. That is what is novel about our work.’

It is down to a phenomenon known as ‘epigenetics’ where the expression of a person’s genes are changed by environmental factors, such as diet.

It could also lead to new ways of treating a broad range of transgenerational afflictions, including fetal alcohol syndrome and obesity.

A number of studies have found links between food and Alzheimer’s risk. 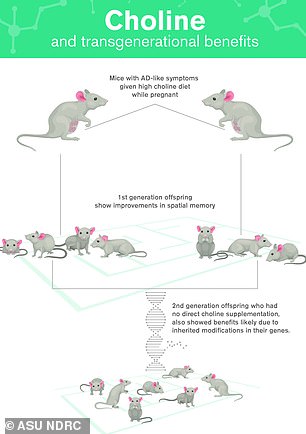 Some suggest Mediterranean-style eating high in fish, vegetables and fruit, whole grains and unsaturated fats like those in olive oil is protective.

Dr Velazquez said choline acts to protect the brain from Alzheimer’s in at least two ways.

Choline helps to reduce levels of an amino acid involved in the build up of amyloid beta plaques – markers of Alzheimer’s.

The disease is also marked by inflammation and over-activity in the microglia, which act as a cleaning system for the brain.

Choline helps to keep the microglia running like a finely-tuned machine, rather than in overdrive or not functioning enough.

It reduces levels of homocysteine, an amino acid that can act as a potent neurotoxin, fueling production of rogue proteins called amyloid plaques.

Homocysteine is known to double the risk of developing Alzheimer’s and is found in elevated levels in patients. Choline converts it into the helpful chemical methionine.

It also reduces the activation of microglia cells responsible for clearing away debris in the brain.

While their housekeeping functions are essential to brain health, activated microglia can get out of control.

This causes brain inflammation and can eventually destroy neurons.

But extra choline may change genes to prevent multiple processes – and perhaps even Alzheimer’s disease itself.