Hay fever is a common condition that’s caused by an allergy to different types of pollen, according to the NHS. Pollen is a fine powder that’s released by plants, and it contains proteins that can irritate the nose, throat and eyes. With around 20 per cent of the UK affected by hay fever, pollen count spikes could result in large numbers of runny noses and watering eyes. All of England and Northern Ireland can expect ‘High’ levels of pollen today, the Met Office has revealed.

Hay fever patients in England and Northern Ireland may have to take preventative measures today to avoid unwanted symptoms.

Mainland Scotland has ‘Moderate’ pollen counts, while the Orkney and Shetland Islands has ‘Low’ levels of pollen.

Today is expected to have the highest pollen count of the entire week, according to Met Office figures.

Hay fever symptoms are likely to be caused by a mix of tree and grass pollen at this time of the year, it said.

If you tend to have signs of the condition, it’s best to avoid going outside at the start of the day, as well as the very end of the day, said charity Allergy UK.

“Everyone loves to be in the garden on a sunny day, but for those with allergies it can make gardening, or just relaxing, a miserable time,” it said. 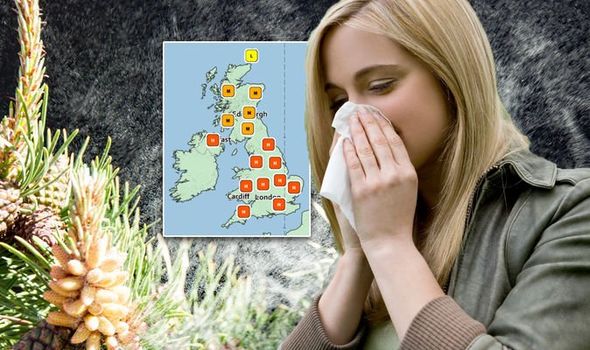 “Allergies cannot be cured, but avoiding contact with the allergen that triggers your symptoms may reduce the symptoms of the allergy.

“Pollen levels are at their highest at the beginning of the day, when they rise with the warming air, and at the end of the day when it’s cooling down.

“Counts will increase in dry warm weather, especially if it’s windy. So avoid going outside – and especially avoid strenuous activity – at these times.

It’s also important to avoid drying clothes on an outdoor washing line, especially when pollen counts are high, it added. 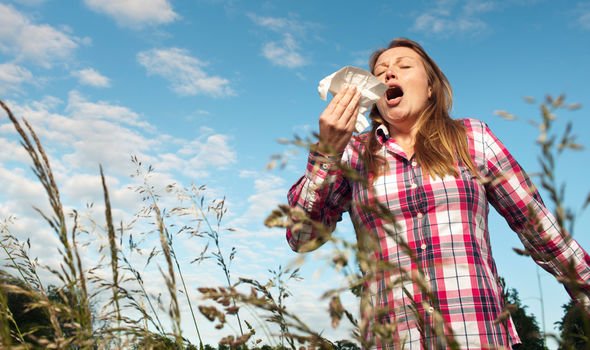 Some patients may also experience a loss of smell, facial pain, earache, and tiredness.