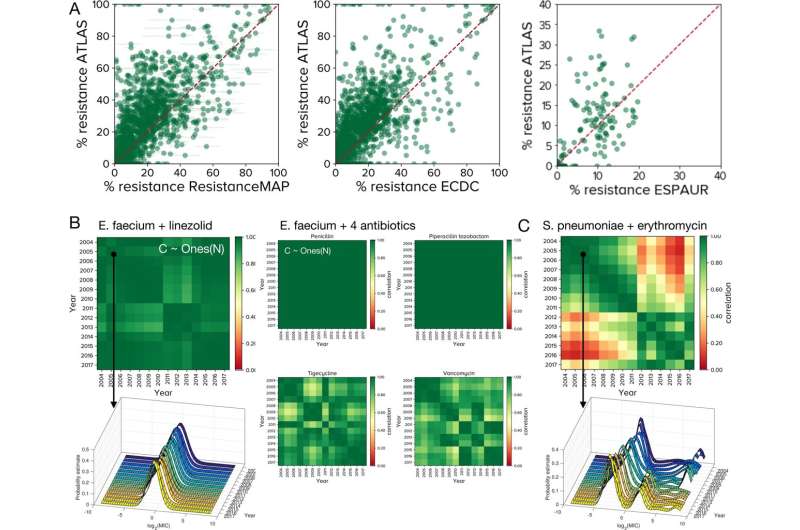 Scientists have used ideas from artificial intelligence to identify patterns of antibiotic resistance around the world.

The researchers examined a host of datasets from medical companies and health agencies to identify patterns in how antibiotic resistance changes.

The most medically complete dataset is published by Pfizer—which has been collating data for two decades.

Using this dataset, called ATLAS, the team were able to compare information already in the public domain to highlight discrepancies and predict future increases in resistance.

Authors found that ATLAS provides a significantly different picture, including resistance not seen previously. They also highlight the lack of data made available in Africa.

The researchers believe the new techniques will provide a significant boost to both the understanding and knowledge of how resistance is growing, and where.

The research was published in Nature Communications on Wednesday May 25, 2022.

Professor Beardmore, lead author of the study said: “AI is a box of tricks that could help solve the antibiotic resistance problem, but national health agencies need to publish much more data for that to happen.

“Resistance does seem to be on the increase but even if it were to come down because of successful health policy changes or new medical technologies, missing data make those reductions hard to spot.”

While it occurs naturally, the overuse and misuse of antibiotics in humans is causing the process to accelerate at a significant rate. As a result, a growing number of illnesses, such as sepsis, pneumonia and tuberculosis, are becoming harder to treat.

A key factor in the fight against resistance lies in the patterns that highlight where outbreaks might occur, and for what ailments. These new techniques provide a pivotal tool for this, finding new ways of extracting antibiotic resistance patterns from many millions of datapoints.

Pablo Catalan, a data scientist from Madrid said: “Our work on ATLAS shows resistance in patients is a dynamic process that contains lots of patterns and the more data we have, the better we’ll understand those patterns and understand when our actions are pulling resistance downwards, or making things worse.”

Jon Iredell, a collaborating clinician added: “When a bacterium is sampled from one of my patients, that is a chance to increase the amount of data we have on patterns of antibiotic resistance that we are not, as yet, taking.”