A new alternative to statins could help hundreds of thousands of people at risk of heart disease, research suggests.

A cholesterol drug called bempedoic acid has been shown to be just as good as statins at lowering cholesterol – but without the same side effects.

A trial led by Imperial College London shows the daily pills can also be taken alongside statins for those who cannot get their cholesterol low enough using statins alone.

Study leader Professor Kausik Ray said: ‘Bempedoic acid could be another addition to the arsenal of cholesterol-lowering treatments available to patients. 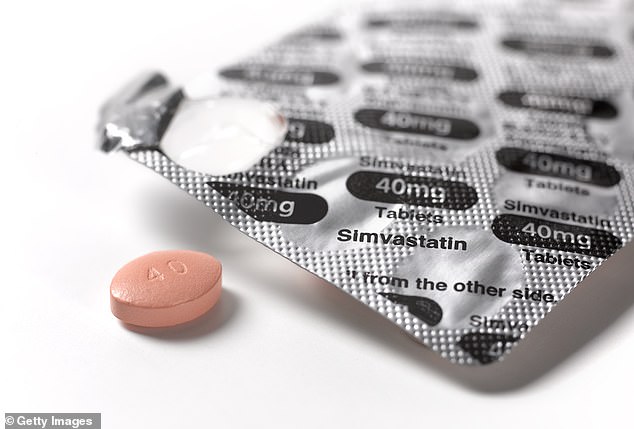 Statins, the most commonly prescribed medication in the UK, are taken by millions of people in the UK but some experience aches and pains in their muscles as a side effect (stock image)

‘We have a new class of drug that could be given to patients who are already taking statins and could help them to further reduce their cholesterol levels and thus potentially cut their risk of heart attacks and strokes.’

Roughly six million people in Britain take statins, preventing 80,000 heart attacks and strokes every year at the cost of roughly £20 a year per patient.

Another six million people could benefit from the drugs, but do not take them.

Many others start taking the drugs but stop – with between 5 per cent and 20 per cent of people giving up because of muscle pain.

The only alternative treatments available until now have been expensive injections called PCSK9-inhibitors – but the NHS barely uses them because they cost more than £4,000 a year.

Professor Ray believes bempedoic acid could provide an alternative treatment to those who cannot cope with the side effects of statins, but who do not qualify for expensive injections.

The drug has not yet been given a price but because it is a simple chemical – rather than the complex antibody used in PCSK9-inhibitors – experts anticipate it will be much cheaper.

It could also be used by the many people – including some who have already suffered a heart attack – who struggle to lower their cholesterol levels even using statins.

Professor Ray said: ‘I would have thought the number of people in Britain who might benefit would be in the hundreds of thousands.’

His trial of 2,200 people, published in the prestigious New England Journal of Medicine, showed that when taken alongside statins, bempedoic acid reduced cholesterol levels by 18 per cent more than taking statins alone.

WHAT IS HIGH CHOLESTEROL?

Cholesterol is a fatty substance that is vital for the normal functioning of the body.

But too much can cause it to build up in the arteries, restricting blood flow to the heart, brain and rest of the body.

This raises the risk of angina, heart attacks, stroke and blood clots.

Cholesterol is made in the liver and is carried in the blood by proteins.

The first – high-density lipoprotein (HDL) – carries cholesterol from cells to the liver where it is broken down or passed as waste. This is ‘good cholesterol’.

High cholesterol can be genetic but it is also linked to a diet rich in saturated fat, as well as smoking, diabetes, high blood pressure and a family history of stroke or heart disease.

Blood cholesterol is measured in units called millimoles per litre of blood, often shortened to mmol/L.

Cholesterol can be lowered by eating a healthy, low-fat diet; not smoking; and exercising regularly.

If these do not help, cholesterol-lowering medication like statins may be prescribed.

Professor Ray said at the moment many people who struggle to lower their cholesterol are given two different types of statins.

‘But if you double dose statins you only get 6 per cent lower cholesterol – and some people report greater side effects.’

Drug company Esperion, which makes bempedoic acid, has already submitted an application for a medicines licence to the European Medicines Agency. If approved it could be available by next year.

Like statins, bempedoic acid works by blocking a key enzyme used by the body to make cholesterol, called ATP-citrate lyase, but in a slightly different way.

Professor Ray added: ‘One of the key advantages of bempedoic acid is supposed to be that it shouldn’t cause the muscle side effects reported by some statins users, as it taken up by the liver and needs to be converted into its active form via an enzyme only found in the liver.

‘Once converted to the active form the drug cannot leave the liver, so it can’t enter muscles and hence could be of considerable advantage for some.

‘It could be an option for patients who are unable to tolerate statins at higher doses, or at all.’

In a second study, published in the same journal, the team looked at genetic data from more than half a million people to model the likely effects of the treatment in the long term.

This study suggested that taken alone, bempedoic acid was just as good at statins at cutting the risk of heart disease.

Prof Sir Nilesh Samani, medical director at the British Heart Foundation, said: ‘Research has shown a clear link between cholesterol and heart disease. People with high cholesterol levels may need to combine medication along with a healthy lifestyle to bring these levels down.

‘On the whole statins do a great job of lowering cholesterol.

‘However, this new drug could provide real benefit for the few people who can’t take them or require additional treatments to get it to the right level.

‘The research suggests that it has the potential to reduce risk of heart attacks and strokes without major side effects.’