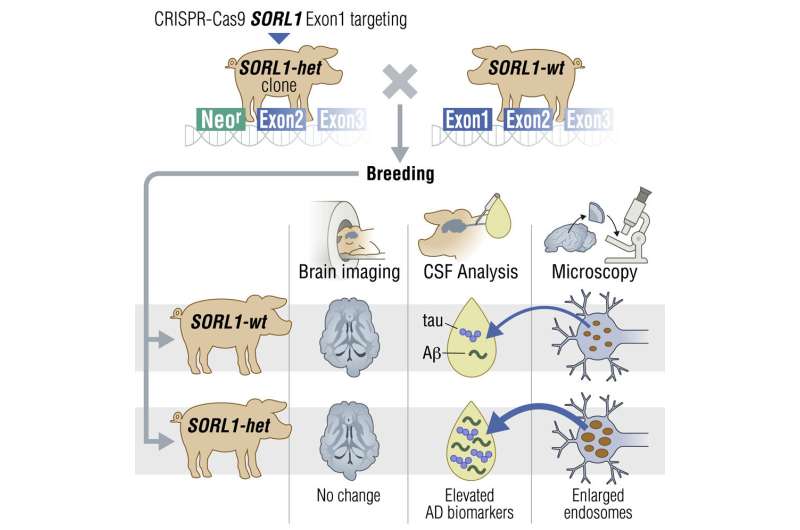 For decades, researchers from all over the world have been working hard to understand Alzheimer’s disease. Now, a collaboration between the Department of Biomedicine and the Department of Clinical Medicine at Aarhus University has resulted in a flock of minipigs that could lead to a major step forward in the research and treatment of Alzheimer’s.

The cloned pigs were born with a mutation in the gene SORL1, which is interesting because the mutations are found in up to 2-3% of all early onset Alzheimer’s cases in human beings.

Due to the gene mutation, the pigs develop signs of Alzheimer’s at a young age. This gives the researchers an opportunity to follow the early signs of the disease, as the pigs show changes in the same biomarkers that are used to make the diagnosis in humans.

“By following the changes over time in the pigs, we can better understand the earliest changes in the cells. Later, these changes lead to the irreversible alterations in the brain that are the cause of dementia. But now we can follow the pigs before they lose their memory, change their behavior, etc., which will make it possible to test new drugs that can be used at an early stage to prevent SORL1-associated Alzheimer’s disease,” says Associate Professor Olav Michael Andersen, who is the first author of the study, which has just been published in the scientific journal Cell Reports Medicine.

“Pigs resemble human beings in many ways, which is why this increases the possibilities of producing drugs that will work to counteract Alzheimer’s. It is important to have a workable animal model to bridge the gap between research and drug development,” he explains.

Since the 1990s, researchers have known of three genes which—if they mutate—can directly cause Alzheimer’s disease.

Through intense research over the past 20 years, it has now definitively been established that a mutation in a fourth gene, namely SORL1, can also directly cause the widespread dementia disorder. If this gene is defective, the person carrying the genetic defect will develop Alzheimer’s.

“We have created an animal model for Alzheimer’s in minipigs by changing one of just four genes that are currently known to be directly responsible for the disease. The pigs can be used in the pharmaceutical industry to develop new drugs—and at the same time, this can provide researchers with better possibilities to understand the early changes in the brains of people who will later develop Alzheimer’s,” says Olav Michael Andersen.

Researchers have also previously developed pig models for Alzheimer’s and other diseases by means of cloning. This is done by removing the hereditary material from an underutilized egg cell taken from a porker, after which the cell is fused with a skin cell from another pig.

In this study, the researchers had previously used CRISPR-Cas9-based gene editing to destroy the SORL1 gene in a skin cell taken from a minipig of the Göttingen breed.

The result is a reconstructed embryo, i.e. a cloned egg, which develops into a new individual with the same genetic characteristics as the gene-edited skin cell. This means that the cloned minipigs are born with a damaged SORL1 gene.

“The pigs resemble Alzheimer’s patients who have the SORL1 gene defects—in contrast to previous pig models for Alzheimer’s, which have had one or more mutated human genes inserted in the hope of accelerating the disease,” says Associate Professor Charlotte Brandt Sørensen, who has been responsible for the development of the genetically modified, cloned pigs.

As the mutation is inherited, researchers can now breed pigs that show the first signs of Alzheimer’s before they reach the age of three.

Can test drugs before the disease breaks out

“We know from human genetics that when the SORL1 gene is destroyed, we develop Alzheimer’s. We have shown that if we destroy this gene in pigs, precisely the early changes occur in the animals’ brain cells that we had dared to hope for. This makes it possible to find biomarkers that reflect the initial, pre-clinical phase of the disease,” he says.

The Danish company Ellegaard Göttingen Minipigs owns the rights to the pig variety, and is breeding them.