If Willarda Edwards, MD, MBA, had won her 2022 campaign for president-elect of the American Medical Association (AMA), she would have been the second Black woman to head the group. 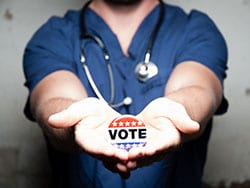 The AMA, however, accused her of vote trading. Now, the Baltimore internist and AMA trustee has sued the organization for defamation and conspiracy.

The lawsuit sheds light on the power dynamics of a politically potent organization that has more than 271,000 members and holds assets of $1.2 billion. The AMA president is one of the most visible figures in American medicine.

“The AMA impugned Dr Edwards with these false charges, which destroyed her candidacy and irreparably damaged her reputation,” according to the complaint, which was filed November 9 in Baltimore County Circuit Court. The case was later moved to federal court.

The AMA “previously rejected our attempt to resolve this matter without litigation,” Edwards’ attorney, Timothy Maloney, told Medscape. An AMA spokesman said the organization had no comment on Edwards’ suit.

As chair of the AMA Task Force on Health Equity, “she helped lead the way in consensus building and driving action that in 2019 resulted in the AMA House of Delegates establishing the AMA Center on Health Equity,” according to her AMA bio page.

In June 2022, Edwards was one of three individuals running to be AMA president-elect.

According to Edwards’ complaint, she was “incorrectly advised by colleagues” that Virginia urologist William Reha, MD, had decided not to seek the AMA vice-speakership in 2023. This was important because both Edwards and Reha were in the Southeastern delegation. It could be in Edwards’ favor if Reha was not running, as it would mean one less leadership candidate from the same region.

Edwards called Reha on June 6 to discuss the matter. When they talked, Reha allegedly recorded the call without Edwards’ knowledge or permission — a felony in Maryland — and also steered her toward discussions about how his decision could benefit her campaign, according to the complaint.

The suit alleges that Reha’s questions were “clearly calculated to draw some statements by Dr Edwards that he could use later to thwart her candidacy and to benefit her opponent.”

On June 10, at the AMA’s House of Delegates meeting in Chicago, Edwards was taken aside and questioned by members of the AMA’s Election Campaign Committee, according to the complaint. They accused her of “vote trading” but did not provide any evidence or a copy of a complaint they said had been filed against her, the suit said.

Edwards was given no opportunity to produce her own evidence or rebut the accusations, the suit alleges.

Just before the delegates started formal business on June 13, House Speaker Bruce Scott, MD, read a statement to the assembly saying that a complaint of a possible campaign violation had been filed against Edwards.

Scott told the delegates that “committee members interviewed the complainant and multiple other individuals said to have knowledge of the circumstances. In addition to conducting multiple interviews, the committee reviewed evidence that was deemed credible and corroborated that a campaign violation did in fact occur,” according to the complaint.

Edwards was given a short opportunity to speak, in which she denied any violations.

According to a news report, Edwards said, “I’ve been in the House of Delegates for 30 years, and you know me as a process person ― a person who truly believes in the process and trying to follow the complexities of our election campaign.”

The lawsuit alleges that “this defamatory conduct was repeated the next day to more than 600 delegates just minutes prior to the casting of votes, when Dr Scott repeated these allegations.”

AMA: Nothing More to Add

The suit alleges that neither the Election Campaign Committee nor the AMA itself has made any accusers or complaints available to Edwards and that it has not provided any audio or written evidence of her alleged violation.

In July, the AMA’s Southeastern delegation told its membership, “We continue to maintain that Willarda was ‘set up’…. The whole affair lacked any reasonable semblance of due process.”

The delegation has filed a counter claim against the AMA seeking “to address this lack of due process as well as the reputational harm” to the delegation.

The AMA said that it has nothing it can produce. “The Speaker of the House presented a verbal report to the attending delegates,” said a spokesman. “The Speaker’s report remains the only remarks from an AMA officer, and no additional remarks can be expected at this time.”

He added that there “is no official transcript of the Speaker’s report.”

Alicia Ault is a Saint Petersburg, Florida–based freelance journalist whose work has appeared in publications including JAMA and Smithsonian.com. You can find her on Twitter @aliciaault.