A man in China went blind in one eye after suffering an ‘eye stroke’ while using his smartphone in bed, according to reports.

The man, known only as Wang, is said to have temporarily lost his sight while playing games on the device with the lights off.

The condition, also known as an eye stroke, is caused by a blockage or narrowing of the arteries carrying oxygen to the retina.

But US doctors were sceptical because they say the condition typically occurs in older people with heart problems. 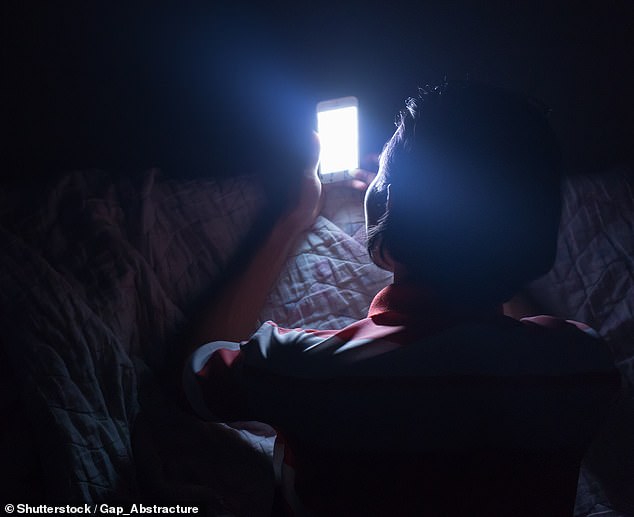 They said it was more likely that he had suffered an ocular migraine – a temporary loss of vision caused by spasms of blood vessels in the retina or behind the eye.

This symptom is far more common and can affect people when they are tired and straining their eyes at one particular spot.

Wang told the South China Morning Post: ‘I was using my right eye to look at my phone, and I could see some words but not others.’

His doctor, Lei Tao, said Wang’s blind spell was most likely caused by overuse of his smartphone which put excessive strain on his vision.

Wang admitted he had a habit of playing on his phone late at night for long spells.

Tao claimed around 20 new patients every month were visiting his clinic with similar symptoms. He described it as a growing epidemic.

But US eye experts were not convinced. Dr Gareth Lema, a retinal surgeon at Mount Sinai’s New York Eye and Ear Infirmary, told the New York Post: ‘To make the claim of an eye stroke, there should be documentation.

‘There would also be a retinal whitening and arterial thinning that would persist for weeks.

‘[Wang] could’ve also been experiencing ocular migraines. In conclusion, I wouldn’t use this [case] to raise alarm.’

WHAT IS AN EYE STROKE?

Like a stroke in the brain, this happens when blood flow is blocked in the retina, a thin layer of tissue in the eye that helps you see.

It can cause blurry vision and even blindness. Arteries carry blood to the retina from the heart.

Without blood flow, the cells in the retina don’t get enough oxygen. They can start to die within minutes or hours.

An eye stroke is an emergency. If you don’t get treated right away, you can damage your vision permanently.

Usually, the blockage comes from a blood clot. The clot may form in the retina or travel there from another part of the body. The blockage also can happen after a piece of fatty plaque plugs the artery.

If you have a condition that affects the blood vessels — including diabetes, high blood pressure, high cholesterol, or heart disease — it can raise your chances of an eye stroke.

Other things that make a retinal artery occlusion more likely include:

The main sign of eye stroke is a sudden change in sight. It almost always happens in only one eye. You usually won’t feel any pain.

The most common type of eye stroke is called central retinal artery occlusion. It can leave you with little useful vision.

You might be able to see a hand move, but not much more. Rarely, your vision might return on its own.

If you have the less serious blockage in the smaller arteries, your vision may go back to normal about 80% of the time.