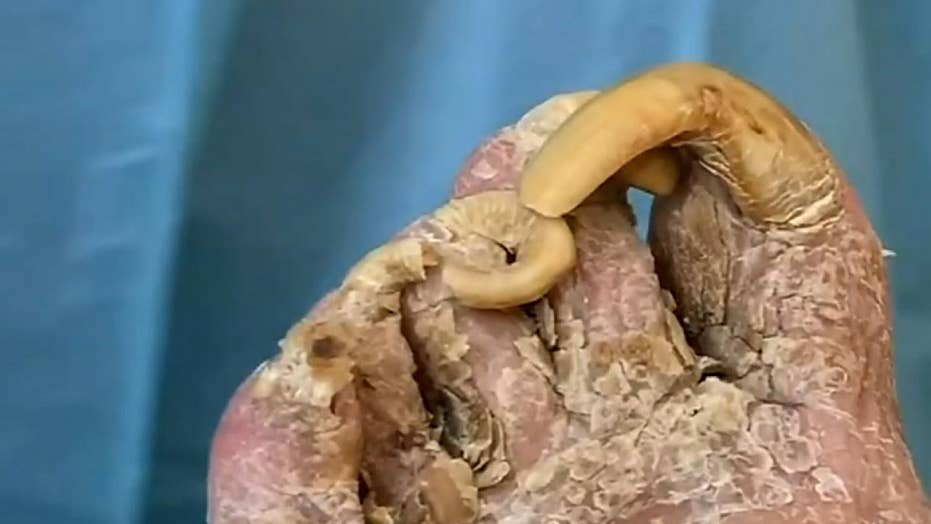 A video described by the podiatrist who posted it as an “an unfortunate circumstance” has gone viral as he works for upwards of 10 minutes to try and clip his patient’s extremely distorted toenails that had grown several inches in length.

Dr. Binh Nguyen, of Healthy Feet Podiatry in Tampa, Fla., does not identify his patient or show her face, but he points out that her toenails hadn’t been cut recently, and asked if she has been off her feet for awhile.

“I can’t lean down,” the patient responds, possibly giving a clue as to why her nails had grown so out of control. Her feet are also covered in layers of flaky dry skin, which Nguyen carefully picks off. Nguyen, whose initial video racked up over 2 million views 5 months ago, said he happened to be at a facility that he was visiting and that he didn’t have all of the proper tools he needed to completely address her needs.

“I did it as a courtesy for this patient, I just happened to have some nail nippers, so I took care of her feet for her,” he told his viewers. “But please forgive me before you take out your internet pitchforks. I was by myself, I didn’t have all the tools I normally would have. Just please enjoy the video, take it for what it is.”

Nguyen repeatedly asks his patient if she is in pain while he’s cutting away at her thick, yellowed nails, and she responds “a little,” but agrees that her feet are looking much better than when she first came in. He said he was working to get her nails down to a manageable length so that she could put socks on, and wear shoes comfortably.

When he gets to the right big toe, which had grown several inches in thickness and length, he acknowledges that he will have to work at it “piece by piece.”

“Is that hurting?” he asked.

Nguyen assured his viewers that the woman was scheduled to see him for a follow-up appointment within a week’s time and that he would have better tools and lighting to address her needs.