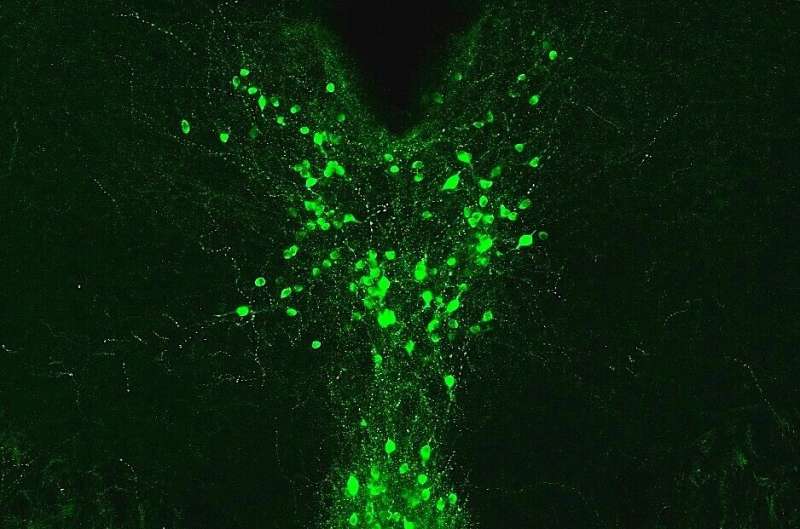 Males and females, generally speaking, experience and respond to pain differently, but scientists have yet to understand all the brain circuits involved in these differences. Now, new research from the UNC School of Medicine lab of Thomas Kash, Ph.D., shows how neurons use dopamine to regulate pain differently in male and female mice.

The discovery, published in the journal Neuron, could help the scientific community devise better pain management strategies, particularly for women, who are disproportionally affected by pain throughout their lifespans.

“We focused on this neural pathway because our previous work and that of others show that specific neurons release dopamine to regulate pain responses,” said Kash, the John R. Andrews Distinguished Professor of Pharmacology. “Unfortunately, that research was done only in male mice. So we decided to look at both male and female mice, and what we found was very surprising.”

Dopamine, long known as the brain’s pleasure chemical, can actually regulate a wide variety of behaviors. The dopamine neurons that Kash and his lab looked at had previously been shown to be important for both the rewarding properties and the pain-relieving properties of heroin. Beyond this, several studies have shown that these neurons can regulate attention, suggesting a link between drug abuse, pain, and attention.

Previously, using male mice, the Kash lab found that dopaminergic neurons played a key role in how opiates dampen pain, likely through the release of dopamine and glutamate. In the new experiments, his lab focused on a neural pathway starting at the midbrain region called the periaqueductal grey, including part of the dorsal raphe. That brain region is involved in behavioral adaptation—how animals learn to respond to their environment. The neurons that make dopamine in that region operate in conjunction with a brain structure called the bed nucleus of the stria terminalis, or BNST, forming a neural pathway.

“We found that activating this pathway reduced pain sensitivity in male mice, but made female mice move more, especially in the presence of something capturing their attention,” said first author Waylin Yu, Ph.D., a former graduate student in the Kash lab and current postdoctoral researcher at UC San Francisco. “We think this is because of the different ways males and females respond to pain.”

In particular, these experiments seem to indicate that dopamine helps males simply not feel as much pain, while in females, dopamine helps the mice focus attention elsewhere while in the presence of pain.