One unfortunate hallmark of being a young adult is having a lot of complicated and heavy feelings all at once while your body is going through a hormone-induced chemistry experiment. It’s a lot. Understanding that reality, more and more parents are saying that they’re having a hard time telling whether their teen is just experiencing those angsty growing pain parts of teenhood, or if it’s something more troubling — like a sign of depression.

Poll co-director Sarah Clark said in a release that the changes “both in youth behavior and in the dynamic between parents and children” can definitely make it harder to get a clear picture of where your child’s mental health is at.

Yet, the poll also found that at least a third of the respondents believed that they wouldn’t have difficulty recognizing that their child was dealing with depression: “Some parents may be overestimating their ability to recognize depression in the mood and behavior of their own child,” Clark said. “An overconfident parent may fail to pick up on the subtle signals that something is amiss.” Meanwhile, a number of parents also responded that they thought their teens might be less capable of recognizing their own depression. 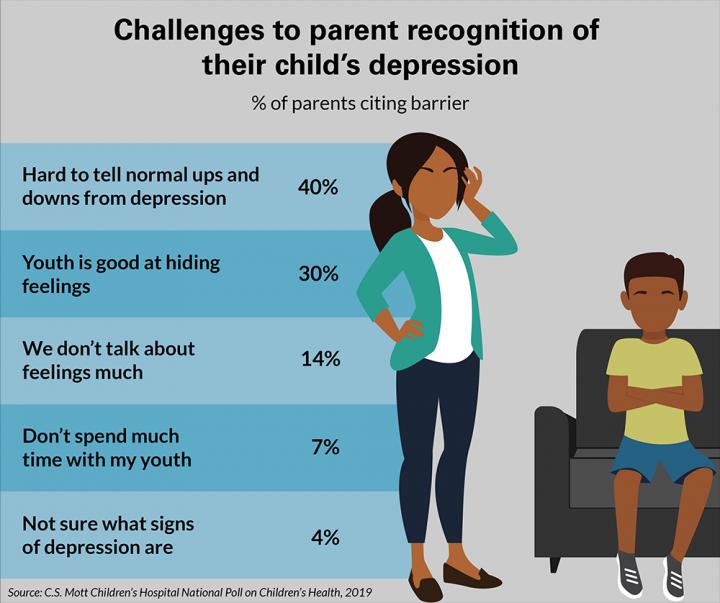 The C.S. Mott Children’s Hospital National Poll on Children’s Health at the University of Michigan.

As the Lucile Packard Children’s Hospital Stanford notes on their site, signs of depression to look out for in teens include feelings of deep sadness or hopelessness, a lack of energy, a loss of pleasure or interest in activities that excited them, anxiety and panic, turmoil, worry and irritability, difficulty organizing, concentrating or remembering things, negative views about the world and life in general, feeling worthless or guilty, drastic changes in appetite or weight and difficulty managing sleep (either sleeping too little or too much.)

Clark notes that parents also recognized the role that schools can play in their child’s support system — but acknowledged the reality of the limited resources available to help each student through their particular problems: “The good news is that parents view schools as a valuable partner in recognizing youth depression. The bad news is that too few schools have adequate resources to screen students for depression, and to offer counseling to students who need it.”

Another study, published in the journal Pediatrics last week, found that, despite an overall increase in child psychiatrists nationwide, one in five children in the United States don’t have access to mental healthcare providers or specialists in their area. Particularly in areas with lower income and lower average education levels, several states reported a decline in the number of child psychiatrists between 2007 and 2016.

So, what can parents do?

In addition to monitoring for signs of depression and having frequent, open conversations with their teens about their mental health, Clark notes that it’s important for parents to also be advocates for mental health resources in schools and to make it clear to district administrators and board members that you believe it’s important to build-out this support system.

“Our report reinforces that depression is not an abstract concept for today’s teens and preteens, or their parents,” Clark says. “This level of familiarity with depression and suicide is consistent with recent statistics showing a dramatic increase in suicide among U.S. youth over the past decade. Rising rates of suicide highlight the importance of recognizing depression in youth.”

If you’re looking for resources for helping a friend or loved one or trying to get information about treatment for yourself, you can turn to the National Suicide Prevention Lifeline by calling them at 1-800-273-8255.