Paramedic, 23, gave herself a STROKE by cracking her neck – and she mistook her own symptoms for being drunk

A paramedic has told how she suffered a stroke when she stretched her neck and ruptured a major artery.

Natalie Kunicki, who works for London Ambulance Service, even mistook her own symptoms as being drunk and was too embarrassed to phone 999.

She was watching films in bed with a friend after a night out last month, when she stretched her neck and heard a loud ‘crack’, but didn’t think much of it.

When Ms Kunicki, 23, got up for the bathroom 15 minutes later, she collapsed to the floor as she was unable to move her left leg.

She was rushed to hospital where she was told her vertebral artery – a major artery in the neck – had burst. This caused a blood clot to form in her brain and triggered a stroke.

Ms Kunicki, who was living in West Hampstead at the time, was so shocked she was left ’emotionless’ for days.

She is now rebuilding her life and slowly gaining her mobility back. But doctors are unsure when and if she will ever fully recover. 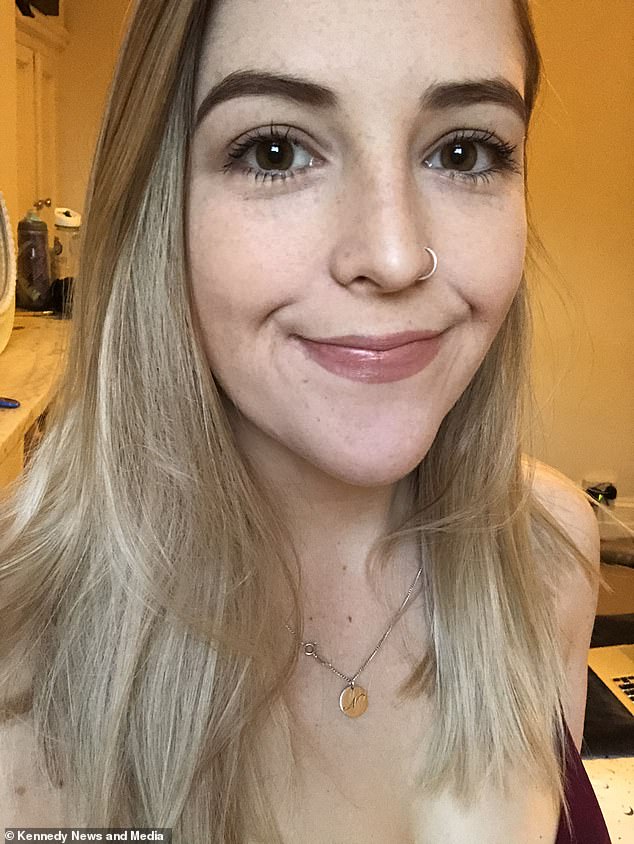 Natalie Kunicki, who works for London Ambulance Service, mistook her own symptoms of a stroke as being drunk on March 4 and initially was too embarrassed to phone 999 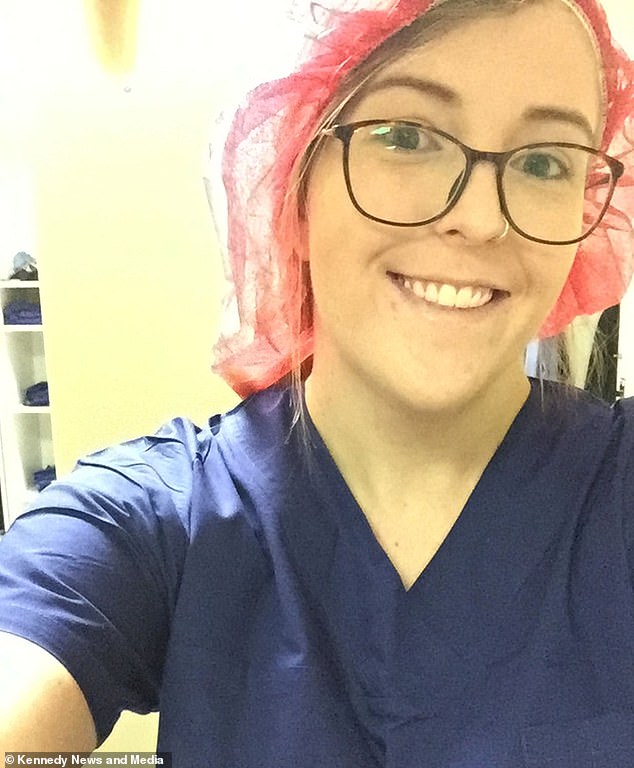 Ms Kunicki, pictured during her nurse training in Australia, was watching films in bed with a friend after a night out when she stretched her neck and heard a loud ‘crack’ 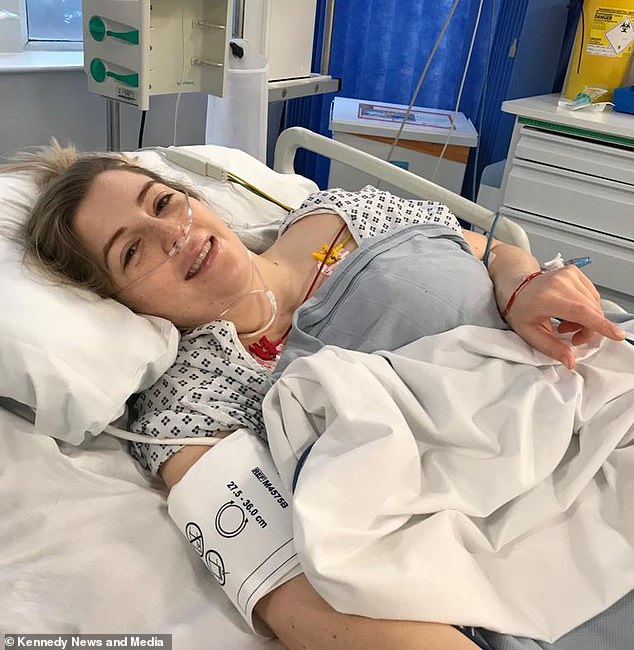 Doctors confirmed that Ms Kunicki’s vertebral artery – a major artery in the neck – had burst causing a blood clot to form in her brain and triggered a stroke. Pictured in hospital

Ms Kunicki said: ‘People need to know that even if you’re young something this simple can cause a stroke.

‘I wasn’t even trying to crack my neck. I just moved and it happened. I stretched my neck and I could just hear this “crack, crack, crack”.

‘My friend asked “was that your neck?” but all my joints crack quite a bit so I didn’t think anything of it. I just laughed.

‘I got up and tried to walk to the bathroom and I was swaying everywhere. I looked down and realised I wasn’t moving my left leg at all then I fell to the floor.’

She added: ‘My friend had to come and pick me up. He thought I was drunk but I knew something else was wrong.

‘I thought I had been drugged. The date rape drug can cause paralysis.’

Ms Kunicki, who moved from Canberra, Australia, to join the LAS in December 2017, admits she was hesitant at first to call 999 as she didn’t want colleagues to turn up and find her ‘tipsy’.

She said: ‘I’m a paramedic and I didn’t ring 999 for ten minutes because I thought it was too unlikely it would be a stroke when I should have known much better.’

After struggling to fall back to sleep, Ms Kunicki finally put aside her embarrassment and called the emergency services.

As soon as the ambulance crew started carrying out tests, Ms Kunicki realised there was something seriously wrong as her coordination had deteriorated and her heart rate and blood pressure were ‘sky high’.

She said: ‘I was trying to call 999 but I was dithering about it. 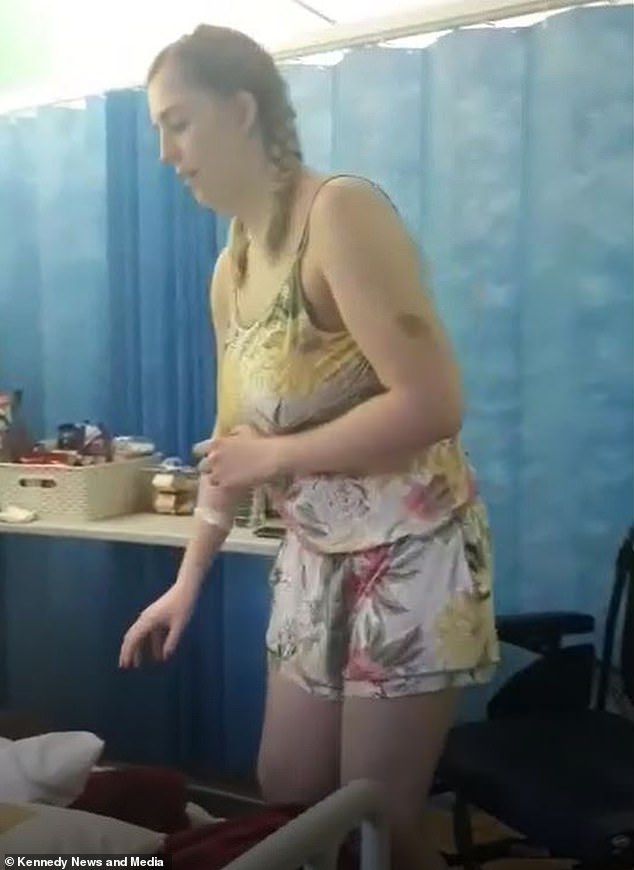 Ms Kunicki is now rebuilding her life but doctors are unsure when and if she will regain full mobility. She said she can’t walk for longer than 15 minutes. Pictured, walking in hospital 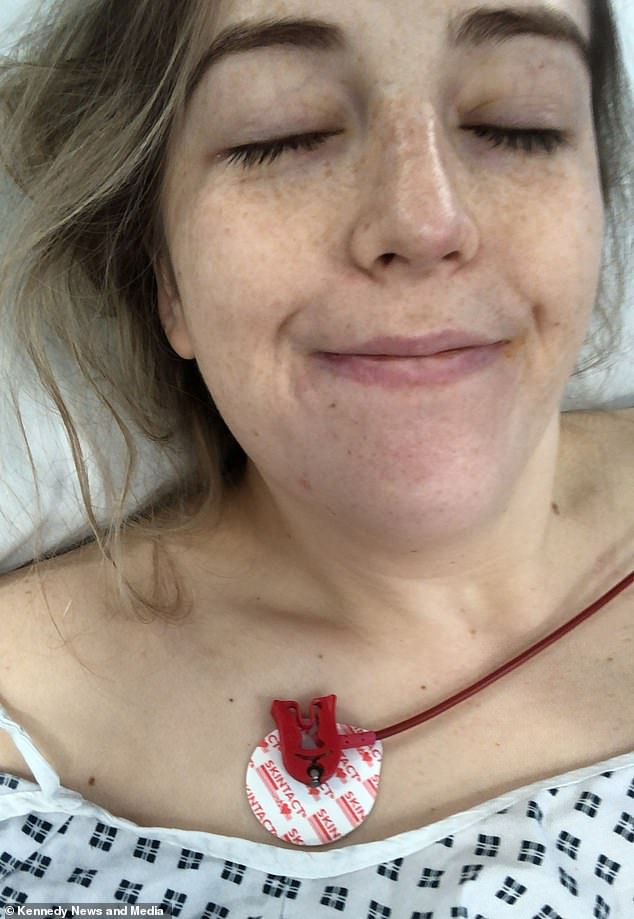 As soon as the ambulance crew started carrying out tests, Ms Kunicki realised there was something seriously wrong as her coordination had deteriorated and her heart rate and blood pressure were ‘sky high’. Pictured in hospital 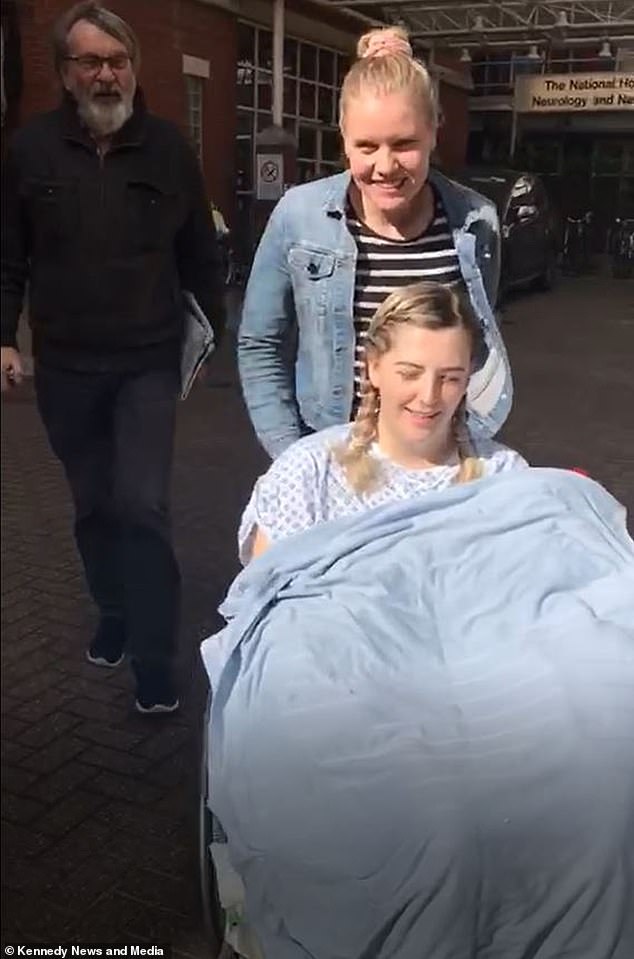 Ms Kunicki, who moved from Canberra, Australia, to join the LAS in December 2017, admits she was hesitant at first to call 999 as she didn’t want a crew she knew to turn up and find her ‘tipsy’. Pictured outside hospital with her flatmate, Emily Nawiesniak, and father, Peter Kunicki

‘I think they did look at me at first like they thought I was just a classic drunk 23-year-old but I told them I was a paramedic and I knew something was wrong.’

After tests, the ambulance crew rushed Ms Kunicki to University College London Hospital where it was confirmed she had suffered a stroke and would need emergency surgery.

After being blue-lighted to the National Hospital for Neurology and Neurosurgery, Ms Kunicki underwent three-hour surgery where doctors discovered her burst artery.

While surgeons were able to repair Ms Kunicki’s artery with a stent, they couldn’t clear the clot in her brain but they believe it will dissolve in time.

Ms Kunicki, whose left side was almost completely paralysed by the stroke, said the diagnosis was such a shock that she became ’emotionless’ for days.

She said: ‘When the consultant told me I’d had a stroke I was in shock.

‘The doctors told me later that just that stretching of my neck had caused my vertebral artery to rupture. It was just spontaneous and there’s a one in a million chance of it happening.

‘I don’t smoke, I don’t really drink and I don’t have any family history of strokes so it’s quite strange it happened to me when I was just moving in bed.

‘I was just completely shut off, trying to compute what had happened. People said I was a bit like a robot and didn’t show much emotion.’

Ms Kunicki was left feeling so low she told her consultant they ‘should have killed her’.

Ms Kunicki said: ‘I expected to wake up from this miracle surgery and everything would be fixed but my mobility was worse and they couldn’t clear the clot.

‘At the start I couldn’t move my thumb and forefinger. I could kind of move my wrist up and down. I couldn’t lift my arm. I could bend my left leg but I couldn’t wiggle my toes. 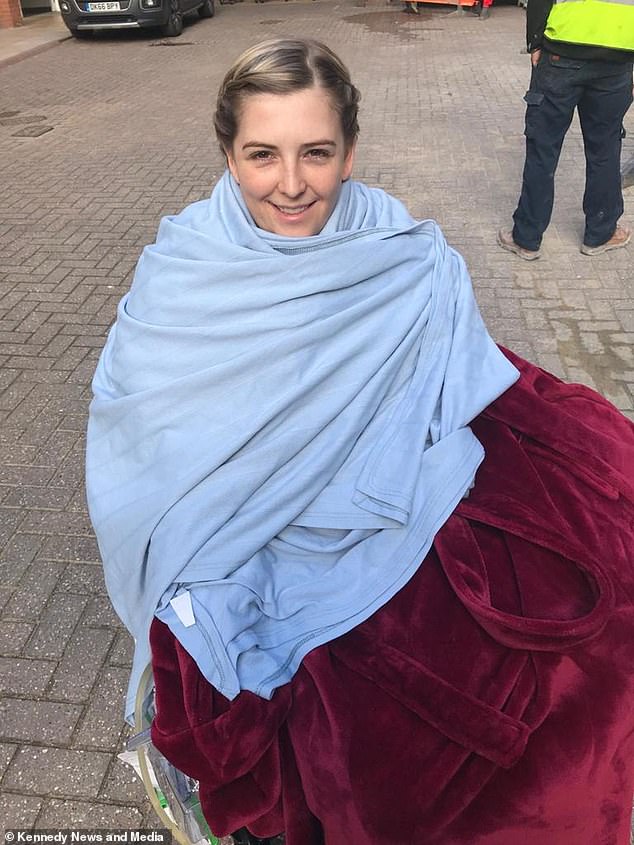 Natalie underwent three-hour surgery where doctors discovered her burst artery. While surgeons were able to repair Natalie’s artery with a stent, they couldn’t clear the clot in her brain but they believe it will dissolve in time. Pictured at hospital after 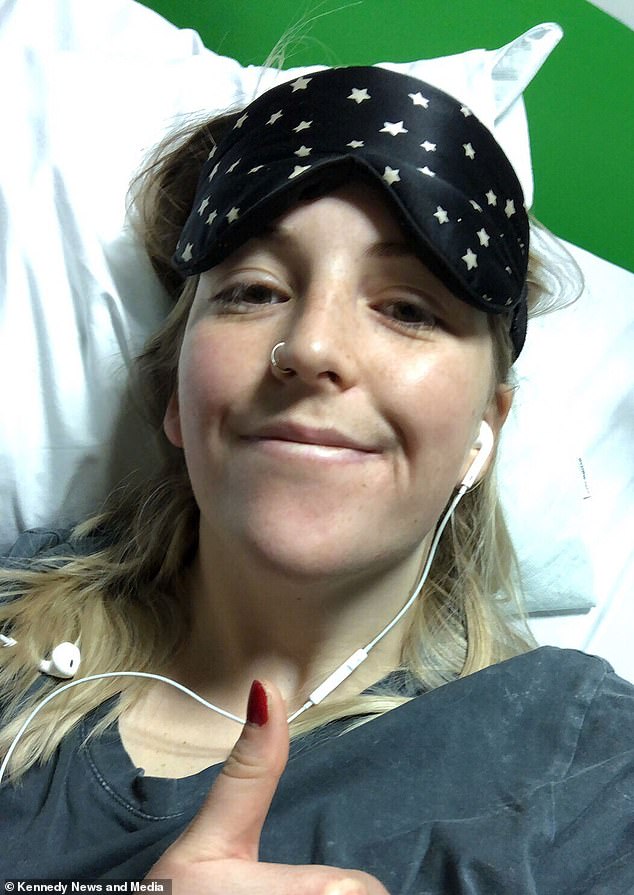 Ms Kunicki was so shocked she was left ’emotionless’ for days, and is now rebuilding her life but doctors are unsure when and if she will regain full mobility. Pictured in hospital recovering 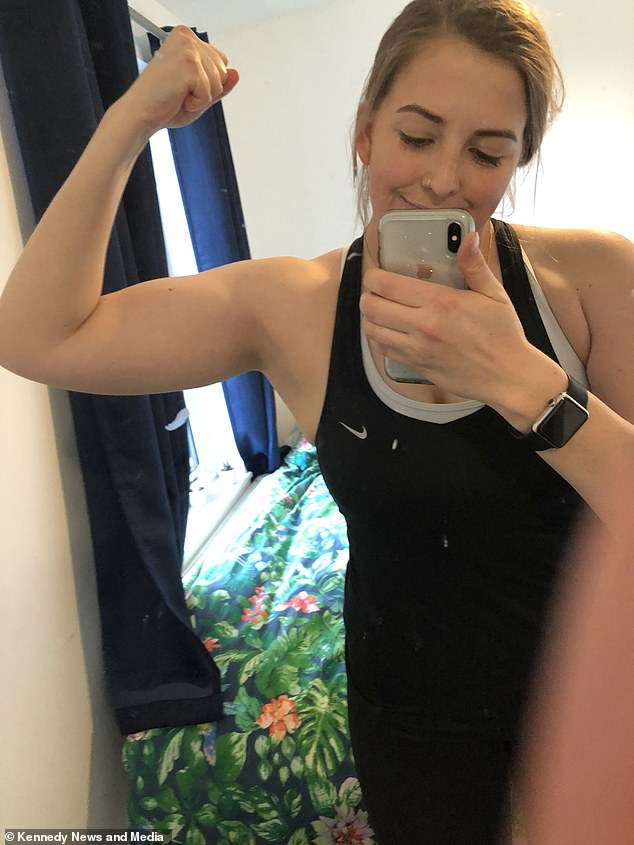 Ms Kunicki was so shocked about her diagnosis of a stroke so young that she was left ’emotionless’ for days and even told a nurse they ‘should have killed her’. Pictured before her stroke – she enjoyed keeping fit and going to the gym

‘I think I scared my consultant because after I woke up she came in to ask how I was going but I told her “you should have killed me”.

‘Depression is really common after a stroke because you lose so much of your independence and your dignity.’

Now she has recovered some movement and sensation, Ms Kunicki is feeling much better.

Doing daily exercises has helped her regain enough movement in her leg, arm and hand.

Doctors cannot give an exact timescale for a full recovery but Ms Kunicki is hoping to be back to work for ‘light duty’ in six to 12 months.

She said: ‘I’ve recovered movement in my left side. I can walk but not for more than five minutes.

‘I’m really clumsy. I can’t do up buttons, I find it too difficult. I can feel hot and cold now but I still feel a bit numb.

‘The doctors just say things like “we’re hoping for a full recovery” and won’t give an exact time because they don’t want to get my hopes up.

‘But I’m determined to get back to work as soon as I can. I just love it.’

As well as her determination to go back to work, Ms Kunicki is also committed to raising more awareness of strokes in young people.

Even as a healthcare professional, Ms Kunicki was shocked to discover how common strokes in young people and children can be. 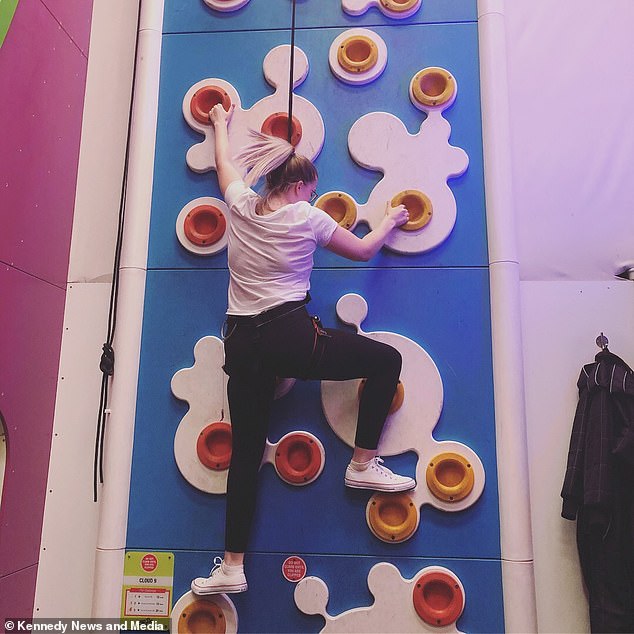 Ms Kunicki said she regularly cracks her joints so didn’t think much of it when her neck made a cracking sound. Pictured, healthy and active before her stroke 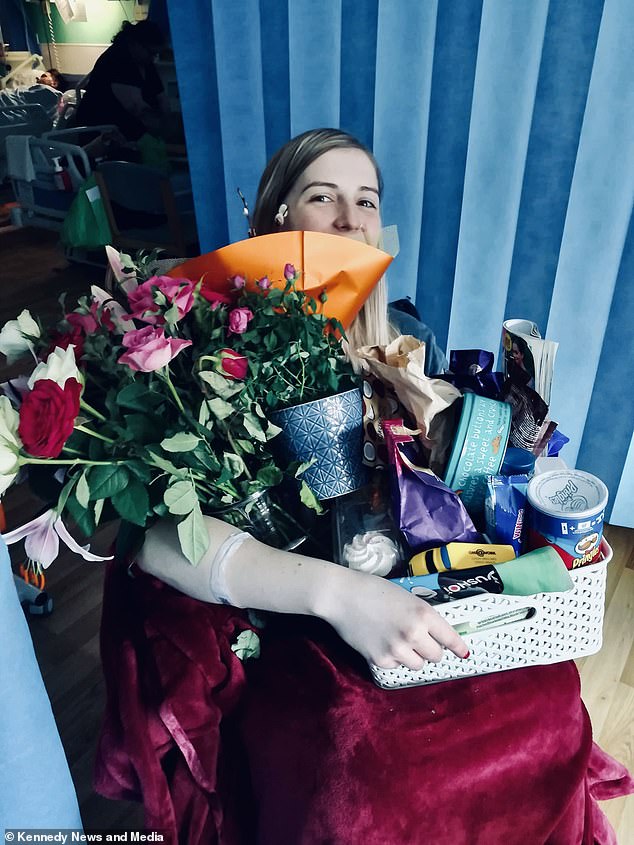 Doctors cannot give an exact timescale for a full recovery but Ms Kunicki is hoping to be back to work for ‘light duty’ in six to 12 months. She was flooded with support from friends and family (pictured with gifts in hospital) 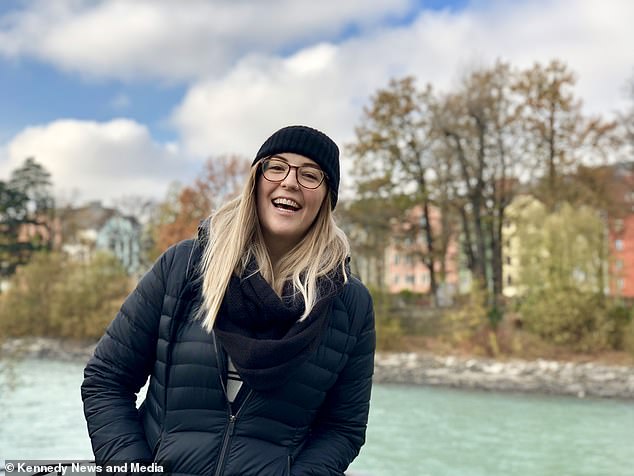 Ms Kennedy has been forced to give up her flat as she cannot afford the rent and is keen to get back to her work which she said she loves. Pictured before

She said: ‘I have been called out to so many people having strokes and they’re always in their 70s or 80s. I have never been to a young person having a stroke.

‘Mine was one in a million but a ruptured vertebral artery is actually quite a common cause of strokes in young people.

‘They will be in the gym or doing something quite physical and it happens. Strokes are also quite common in kids.’

After her stroke Ms Kunicki was forced to give up her flat in West Hampstead as she can’t afford the rent while taking so much time off work.

Instead since her discharge, Ms Kunicki has been living with her parents Peter Kunicki, 65, and Anne Kunicki, 62, in Harrow, London. But they are due to move back to Australia in July.

Ms Kunicki’s brother Michael Kunicki, 33, has set up a fundraising page for her while she gets back on her feet.

Ms Kunicki said: ‘Eighty per cent of the donations are from people I work with which means so much. I really want to get back in my own flat and I really don’t want to have to move back to Australia. I love my work too much and I don’t want to leave them.’

WHAT IS A STROKE?

There are two kinds of stroke:

An ischemic stroke – which accounts for 80 percent of strokes – occurs when there is a blockage in a blood vessel that prevents blood from reaching part of the brain.

The more rare, a hemorrhagic stroke, occurs when a blood vessel bursts, flooding part of the brain with too much blood while depriving other areas of adequate blood supply.

It can be the result of an AVM, or arteriovenous malformation (an abnormal cluster of blood vessels), in the brain.

Thirty percent of subarachnoid hemorrhage sufferers die before reaching the hospital. A further 25 percent die within 24 hours. And 40 percent of survivors die within a week.

Age, high blood pressure, smoking, obesity, sedentary lifestyle, diabetes, atrial fibrillation, family history, and history of a previous stroke or TIA are all risk factors for having a stroke.

SYMPTOMS OF A STROKE

Of the roughly three out of four people who survive a stroke, many will have life-long disabilities.

Both are potentially fatal, and patients require surgery or a drug called tPA (tissue plasminogen activator) within three hours to save them.