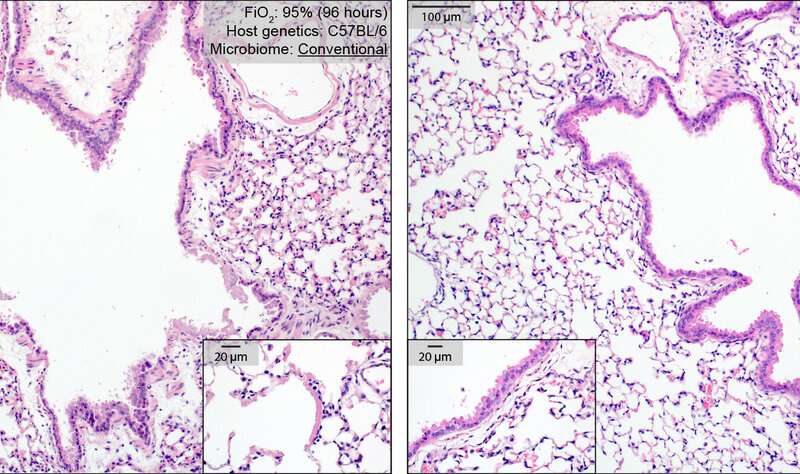 One of the hallmarks of severe COVID-19 is shortness of breath and significantly reduced levels of oxygen in the blood, called hypoxemia. Upon hospitalization, these patients are administered oxygen in an attempt to bring their levels back up to normal. However, a new study hints that this universal therapy may have unintended consequences via an unexpected source—the microbiome.

“It had been assumed that the lungs were relatively clean and free of bacteria,” says Shanna Ashley, Ph.D., a former Post-Doctorate Fellow with the Division of Pulmonary and Critical Care Medicine at U-M Medical School. “We now know that the balance of bacteria inside the lungs matters much like it does in the gut.” Ashley worked with a team led by Robert Dickson, M.D., Assistant Professor of Pulmonary & Critical Care Medicine and Microbiology and Immunology, whose lab has spent years exploring the role of the lung microbiome in health and disease. Their work has found that oxygen disrupts this balance, contributing to lung injury.

Scientists have long known that oxygen can damage the lungs. “Oxygen is actually a potent lung toxin,” says Dickson. “If I put healthy mice in 100% oxygen, they will die in five days, and they’ll have the same kind of severe lung injury that patients with COVID-19 or other lung damage have.”

Patients in intensive care are often treated with high concentrations of oxygen for long periods of time. Their team began to explore how therapeutic oxygen was affecting the lung microbiome. They looked at critically ill patients who were on a ventilator for more than 24 hours and studied bacteria detected in specimens from their lungs. They found marked differences in the bacteria species present in samples from patients depending on whether they received low, intermediate, or high concentrations of oxygen. Specifically, patients who received high oxygen concentrations were much more likely to grow Staphylococcus aureus, bacteria that are very oxygen-tolerant and a common cause of lung infections in the ICU.

“Different types of bacteria vary quite a bit from each other in how well they can handle oxygen,” Dickson says, “So we wondered if the oxygen we give our patients might be influencing the bacterial communities in their respiratory tract.”

To better understand the relationship between oxygen and lung bacteria, the team designed a series of experiments in mice. They first exposed healthy mice to high concentrations of oxygen to determine the effects of oxygen on the lung bacteria of healthy mice.

Using mice, they were able to demonstrate that while the lung microbiome was changed by high oxygen concentrations after only a day, lung injury wasn’t detectable until after 3 days, proving that damage to the lung followed the disruption of the microbiome, and not the other way around. Furthermore, they showed that natural variation in lung bacteria was strongly correlated with variation in the severity of inflammation in oxygen-exposed mice.

To further strengthen the causal link, they turned to germ-free mice, which completely lack a microbiome. “We wanted to see whether there was a selective advantage or disadvantage to having bacteria-free lungs when exposed to therapeutic oxygen,” says Ashley. When comparing two groups of genetically identical mice—one with bacteria and one without—the mice without bacteria were protected from oxygen-induced lung injury.

“That was an extraordinary finding for us,” said Dickson. “Compared to conventional mice, these germ-free mice have the same genetics and receive the same oxygen dosing, but their lungs are protected from injury. Nothing in our current understanding of oxygen-induced lung injury can explain that finding.”

“It really makes the case that the microbiome is somehow playing a role in lung injury,” said Ashley.

Critically ill patients receiving oxygen are typically administered antibiotics as well. The team wondered: Could antibiotics alter the severity of oxygen-induced lung injury in mice? “The short answer is yes, we can affect the severity, but it wasn’t in the direction we predicted,” says Dickson. Vancomycin, an antibiotic that targets gram-positive bacteria like Staphylococcus, had no effect on lung injury, while ceftriaxone, a gram-negative antibiotic, made things worse.

“The microbiome is not all good and not all bad,” comments Dickson. “That’s why it’s important for us to figure out the mechanisms here. We’re currently using very non-specific interventions, when what we need is targeted manipulation of the microbiome.”

Ashley agrees. “We need to think about using the microbiome as a therapeutic target to prevent doing further damage to patients’ lungs while they are on a ventilator or receiving oxygen.”

Dickson cautions against changing clinical practice prematurely based on these findings. “The question of how much oxygen to give critically ill patients is a complex one, and a topic of intense study,” says Dickson. “Our findings are exciting, but I still look to randomized controlled trials to inform my decisions about how to dose oxygen in sick patients.”