Opsonization is the mechanism by which targeting of particles for destruction through phagocytosis becomes enhanced. Opsonins are molecules that mark foreign particles for phagocytosis. Phagocytosis  is the cellular process for removes pathogens and dead or dying cells.

Opsonization is the second step of phagocytosis, with chemotaxis first causing the recruitment of the phagocyte towards the site of infection or cell death. Opsonization, or the attachment of opsonins, then makes the pathogen more visible to the phagocyte, and the opsonized pathogen is then ingested by the phagocyte before intracellular destruction through digestion. 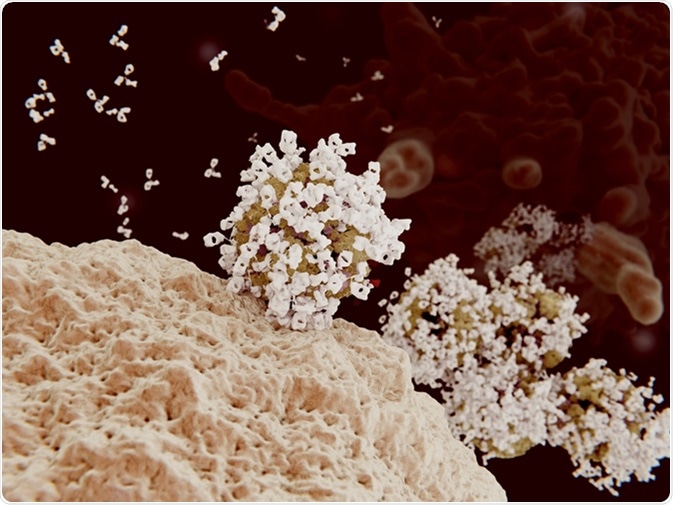 Mechanism of Opsonization and Types of Opsonins

Opsonization occurs through the binding of an opsonin to an epitope of the pathogen or dead  cells. Immune cells and pathogens all have negatively charged cell membranes. This causes the phagocyte and pathogen to be repelled away from each other. The opsonin molecule overcomes the repellant force of the negative charges through the interaction between the opsonin and the cell surface receptors on the immune cells. Specific antibodies can act as opsonins as well as compliment proteins of the innate immune response, and circulating proteins secreted from pattern recognition receptors can also be opsonins.

Antibodies are proteins made by immune cells which target specific molecules. These molecules can range from proteins present on the surface of bacteria, molecules secreted by bacteria or molecules present on host cells. These proteins are Y-shaped, and the “branches” are where the recognition occurs. Antibodies facilitate phagocytosis as the “stalk” of the antibody molecule is recognized by the phagocyte.

The Compliment System and Opsonization

Opsonization of Pathogens by Complement Proteins

The compliment system can lead to the removal of pathogens through three pathways:

The classical pathway is activated by the binding of C1q to antigen-antibody complexes, thus forming a link between innate and adaptive immunity. C1q can also bind directly to the pathogen surface in the absence of an antibody. The C1q protein is a part of the C1 complex which acts on C4 and C3 molecules in a series of cleavage reactions to produce the classical C3 convertase, made up of components including C4b and C3b.

The alternative pathway involves the spontaneous activation of a compliment component binding to the surface of the pathogen. It requires factors such as B and D interacting with each other and C3b to form the alternative C3 convertase, C3bBb.
The mannose-binding lectin pathway begins with the binding of mannose-binding lectin (MBL) to mannose-containing carbohydrates on the pathogen. This leads to the production of MBL-associated serine proteases which in turn activate C4 and C3 to form the classical C3 convertase.

All three pathways converge at this point with C3 convertase cleaving C3 to produce C3b that binds to the pathogen cell membrane and opsonizes the pathogen.

The controlled death of cells through apoptosis and the clearance of these dead cells are important processes for preventing the accumulation of dead cells during inflammation. Poor removal of dead cells can lead to an active immune response that aggravates chronic inflammation. Opsonization removes apoptotic cells via soluble innate pattern-recognition proteins (sPRPs) that are able to recognize a diverse range of surface ligands on apoptotic cells. These circulating proteins include pentraxins, collectins and ficolins.

Phosphatidylcholine (PC) is a pentraxin molecule that is hydrolyzed in the later stages of apoptosis to form lysophosphatidylcholine (lysoPC), exposed on the surface of the dying, or apoptotic, cell. The soluble lysoPC acts as a chemo-attractant so the phagocyte can easily recognize the late apoptotic cell. Ligands on the dead cell act as a signal for the phagocyte to begin ingestion, with vital cells not presenting the same signals.

Shelley has a Master's degree in Human Evolution from the University of Liverpool and is currently working on her Ph.D, researching comparative primate and human skeletal anatomy. She is passionate about science communication with a particular focus on reporting the latest science news and discoveries to a broad audience. Outside of her research and science writing, Shelley enjoys reading, discovering new bands in her home city and going on long dog walks.