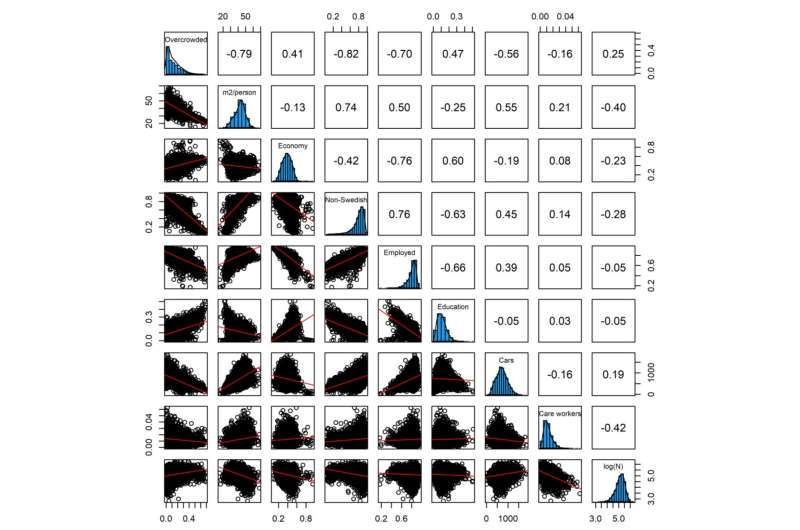 Residential overcrowding, low educational attainment and low income had a crucial impact on how hard the pandemic hit various groups in the community, a study from the University of Gothenburg shows. The research is based on national register data covering Sweden’s entire population.

For the present study, Statistics Sweden (SCB) and the Public Health Agency of Sweden provided the register-derived data on which the researchers based their analyses. They thus had access to information about all Sweden’s inhabitants concerning both lifestyle variables and confirmed COVID-19 cases.

Owing to aberrant contagion patterns, residents of homes for older people or those with physical disabilities were not included. Other demographic groups were analyzed aggregated by geographic zones, based on established zones by statistics Sweden with 700–2,700 residents each.

The results classify certain areas as characterized by high COVID-19 risk. Their common features were a high proportion of overcrowded households, low socioeconomic status (low educational attainment and income), a high proportion of inhabitants with an immigrant background, and a large share of employees in health and social care.

The areas hit hardest by C-19 were mostly unchanged over time from the initial phase of the pandemic to subsequent peaks. In the extensive statistical material, the researchers were able to follow infection trends every month, from January 2020 to June 2021.

The study’s first author, Mia Söderberg, is an associate professor in occupational and environmental medicine at Sahlgrenska Academy, University of Gothenburg, and a registered psychologist.

“This is something people refer to in conversation, but which haven’t been demonstrated scientifically before. It may seem obvious but until now it’s has notbeen analyzed in data covering a country’s whole population. Nor has there been analysis of how two or more risk factors in combination can explain infection risks and trends, over time and geographically,” she says.

A pattern of contagion in which groups with certain living conditions are especially susceptible is characteristic of a pandemic driven by an infectious disease. It is therefore important to identify factors that predict transmission routes over time and from one geographic area to the next.

Overcrowding was a crucial risk factor for people testing positive for COVID-19, particularly in combination with other aspects of socioeconomic vulnerability. In the scientists’ view, an ability to identify the structural living conditions that are beyond individuals’ power to influence is vital.

“Areas with worse living conditions and a high proportion of health care employees have clearly had to bear a heavy burden during the pandemic. Our hope was, through this study, to contribute knowledge of different people’s risk exposure during the rampant spread of a major disease, but also to facilitate preparedness for protective measures in new pandemics,” Söderberg concludes.