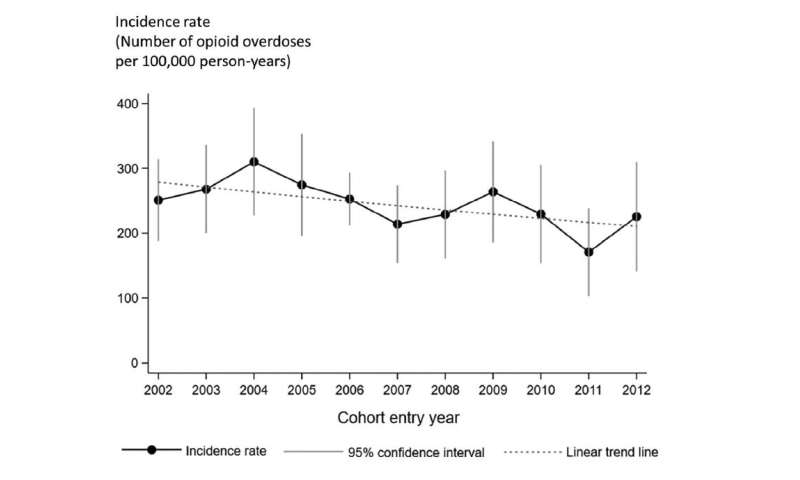 Over the past two decades, opioid overdose mortality nationwide more than doubled from 21,000 deaths in 2000 to 47,000 deaths in 2017. In a new study of Medicaid enrollees, a team of LDI fellows sheds light on the degree to which new or repeated overdoses may be driving this trend—with significant implications for overdose reduction.

In the study, current and former fellows Francesco DeMayo, Mark Neuman, Sean Hennessy, Young Hee Nam, and Penn Medicine’s Warren Bilker found that opioid overdoses did not increase among new users of prescription opioids in four states (CA, FL, NY, PA), even as nationwide overdoses increased. Their findings suggest that the growing number of opioid overdoses among Medicaid enrollees may have largely been driven by repeated overdoses.

Let’s take a look at how they came to this conclusion. The authors looked at Medicaid claims for 1.3 million individuals identified as apparently new users of prescription opioids between 2002 and 2012 in the four study states. They focused on Medicaid enrollees, who are at a disproportionately high risk for overdose. Using a retrospective cohort design, the authors determined the incidence and risk factors for overdose among the cohort. The four states represent about one third of the overall Medicaid population (including dually eligible Medicaid-Medicare enrollees) and trends similar to national ones in the rate of opioid-related inpatient stays or emergency department (ED) visits.

The incidence of opioid overdose among the cohort was 247 for every 100,000 PYs. As shown in Figure 1, there was a slight, statistically nonsignificant decrease (2.8%) in overdose incidence rates by each year of cohort entry, with the highest rate occurring among individuals who entered the cohort in 2004 (310 incident overdoses per 100,000 PYs) and the lowest rate among those who entered in 2011 (171 incidents overdoses per 100,000 PYs). These results indicate that overdose incidence rates among new users of prescription opioids in the study states did not increase in parallel with rapidly rising national overdose death rates or rates of opioid-related hospitalizations and ED visits.

The authors also examined risk factors associated with opioid overdose among the cohort, after adjusting for potential confounding factors. A higher risk of opioid overdose was associated with younger age, white race/ethnicity, and higher initial opioid daily doses (in morphine milligram equivalent, MME), as well as prior substance use disorders (SUDs), mental health conditions, and benzodiazepine prescriptions. Most notably, new prescription opioid users who had a higher initial daily opioid dose (>100 MME/day) or prior SUD had an approximately doubling of overdose compared to individuals with a lower initial daily dose (<50 MME/day) or without a prior history of SUD. Study limitations included not being able to capture fatal and nonfatal opioid overdose separately, or illicit opioid use, from the Medicaid claims data.