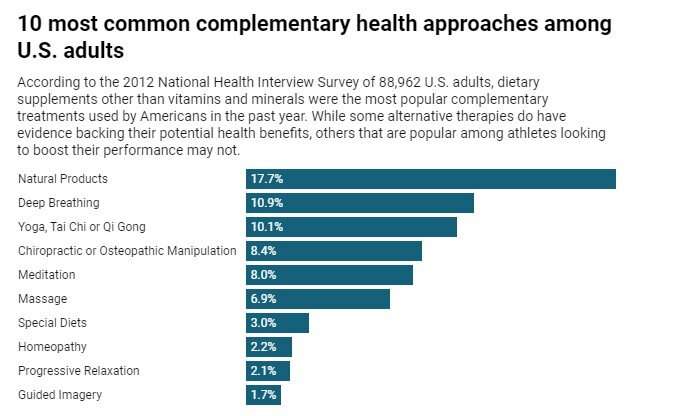 Australian Olympic swimmer Kyle Chalmers earned a silver medal and his personal-best time in the 100-meter freestyle event at the 2021 Tokyo Games. While most of the world focused on his thrilling performance, others were equally interested in the conspicuous, circular bruises on his back and shoulders. Similar marks were seen on Michael Phelps in 2016 when he added six medals to his tally to cement his title as history’s most successful Olympian.

Those blemishes were the work of cupping, an alternative therapy in which small glass cups are placed on the skin at sites of injury or soreness, and used to create suction that stimulates “energy flow.” One form of cupping—wet cupping—involves piercing the skin to bleed the area and remove stagnant blood and toxins.

As an exercise physiologist who studies critical thinking, I can’t help but wonder how an athlete’s unwitting endorsement of alternative therapy might influence the progression of a sport. This is because cupping is fairly characteristic of alternative therapy that, by definition, hasn’t been accepted by conventional science and medicine. When tested in controlled studies, cupping doesn’t work.

In fact, all alternative therapies exist on a spectrum, from treatments with some merit to scientifically disproven nonsense. And interventions like cupping, that masquerade as science without fulfilling its robust methodology, are known as pseudoscience.

Alternative therapies are rife in sport

When it comes to unproven alternative therapies, cupping is just the tip of the iceberg. Other such practices in sport include chiropractic spinal manipulation, nasal strips, hologram bracelets, oxygen drinks, reiki (healing hands), cryotherapy and kinesiology tape or K-tape.

A detailed discussion of the evidence—or lack thereof—underpinning each practice can be found in books and scientific journals. However, most alternative therapies generally have three things in common:

Why do some athletes love alternative therapies?

Despite scientific consensus on their poor efficacy, alternative therapies appear to be more popular among athletes than the general population. So what makes them so popular?

Humans evolved to take mental shortcuts called heuristics that lead to rapid but imperfect solutions, particularly when making health and fitness decisions. Proponents of some alternative therapies exploit the economy heuristic by offering grand rewards for comparatively little investment. Athletes are always chasing the extra 1% and may be particularly susceptible to extravagant claims.

In some instances, a lack of scientific evidence for a given alternative therapy may be the very reason that someone is drawn to it in the first place. The last decade has seen an upswing in anti-science movements and unprecedented attacks on scientists around the world. An individual may turn to alternative treatments due to dissatisfaction or distrust in conventional science, rejection of societal norms, or both. A therapy may become popular simply because it defies the established order.

Sponsorship is another factor. American athletes only win between $15,000 and $37,500 for an Olympic medal, while British athletes receive no prize money whatsoever. Many have regular jobs, while some earn the bulk of their income from paid advertising. Marketing companies are shrewd: They understand our biases better than we do. A company can increase product sales by sponsoring an athlete and affiliating itself with success, fitness and beauty. It’s a win-win because athletes are able to leverage their hefty social media followings into an advertising base. Seemingly innocuous Instagram posts must not be taken at face value.

Finally, some products like K-tape boost their sales through visibility. This phenomenon, where consumers prefer products they’re more familiar with, is called the exposure effect. Increased visibility leads to increased popularity in an ongoing, reciprocal relationship.

Importantly, none of these factors speak to the effectiveness of a product.

How do alternative therapies benefit athletes?

It’s not all squandered time and money, however, and there are benefits to some alternative therapies. Meditation has been used to successfully improve anxiety, depression and psychological well-being, and yoga is a valid means of weight loss. Moreover, massages and other soft tissue therapies appear to reduce muscle soreness and possibly prevent injury.

A distinction can be made between these and unproven alternative therapies based on the data. Care should be taken not to confound plausible claims like weight loss and relaxation with implausible ones like physical healing and detox.

Even without a quantifiable mechanism of action, many alternative remedies claim efficacy based on placebo effects. The placebo effect manifests when a product improves performance via a positive psychological outcome, attributable to an individual’s belief in the product’s effectiveness. The outcome can be powerful. For instance, one study administered flavored water to competitive cyclists and told them it was a glucose supplement. They saw performance improve by 4% relative to a second group, which was told they’d received a placebo.

In Olympic sport, where gold and silver can be decided by less than a half-second, it’s understandable why sports teams may condone use of placebos, particularly when athletes believe in the powerful effects.

Are there risks of alternative therapies in sport?

The downside is that, yes, there are clear risks associated with certain alternative therapies. For instance, there are numerous reports of serious injury and even death following both chiropractic spinal manipulation and acupuncture. Moreover, skin burns are a common side effect of cupping therapy.

Of course, all medical procedures carry risk. But in conventional medicine, physicians make treatment decisions based on a risk-to-benefit ratio. When the benefit of alternative therapy hinges on a placebo, the potential risks become hard to justify, especially given the possible loss of training time due to injury or other negative outcome that results from an alternative treatment.

The broad and indiscriminate use of alternative therapies in sport may also have downstream consequences for clinical practice. This is because it’s impossible to restrict placebo use only to minor ailments and sports performance. A sincere belief in the effectiveness of an alternative therapy that isn’t backed by science will lead to its inevitable use by some individuals to treat a potentially serious condition, sometimes with fatal consequences.

Is there a place for alternative therapy?

Might alternative treatments complement those endorsed by science? Perhaps. But safe practice requires drawing a clear line in the sand to restrict alternative therapies to minor ailments and sports performance, not replace modern medicine.

Pseudoscience is a major barrier to both evidence-based practice and science education and literacy. That’s why it’s a potential burden in sport, and why education programs are needed to help people distinguish science from pseudoscience. Not just in sport, but in all facets of society.