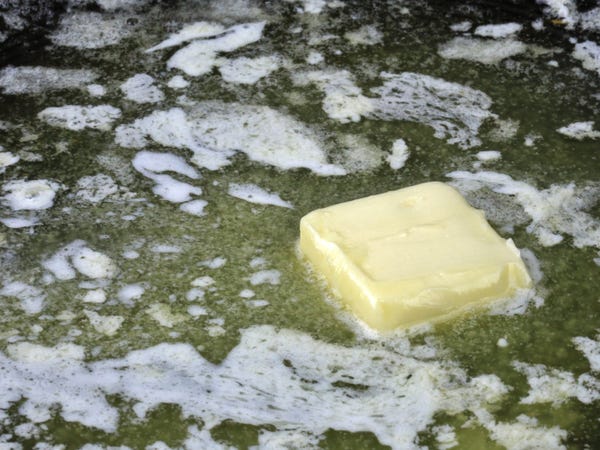 Saturated fat is one of the nutrition world's most explosive topics. It's been vilified for decades as the source of most Americans' health problems, and celebrated as a panacea of health by low- and no-carb dieters (think, keto).

The battle over this maligned macronutrient is far from over, according to former USDA researcher Gary List.

Americans are eating as much saturated fats as before — if not more — despite continued advice to lower their fat intake, List said at a virual conference for the American Chemical Society in April.

And yet, while obesity rates are rising, rates of cardiovascular illness have steadily decreased.

It's a "paradox" of nutrition science that is consuming the industry at the moment, List said. It's led skeptics — including many keto advocates — to question whether saturated fat is as bad as we're told, and whether ditching vegetable oils is really improving our health.

Swapping out saturated fat can lead to unhealthy alternatives

One of the primary sources of confusion around saturated fats is that, historically, substitutes have often been even worse for health, according to cardiologist Elizabeth Klodas.

One of the issues with the American diet over time is that, as low-fat became a popular diet trend, food manufacturers replaced saturated fats with refined carbohydrates (like sugar) or trans fats, to keep them highly palatable.

While trans fats have since been banned in the US, processed carbs continue to be a major player in the standard American diet, to the detriment of our health.

"There's a big difference between just trading out saturated fat for plant oils and attending to the whole diet," Klodas told Insider. "Changing out the fats does nothing to change out carbohydrates – and if you leave heavily processed carbs in, you're not going to get ahead in terms of health."

As our understanding of nutrition has broadened over time, it's become clear that there can be a place for high-fat, nutrient-rich whole foods like meat and dairy in the diet in moderation, and these may be preferable to hyper-processed alternatives.

Fat is only one factor in health

Part of the decrease in heart attacks and similar ailments could be related to factors that have nothing to do with dietary fat, List said. As a result, the confusion and controversy around saturated fat may be because of too many other confounding variables.

For instance, smoking rates have declined significantly since the 1980s, when saturated fat first became public enemy number one. And more people report exercising daily. At the same time, medical advances have made it easier to control chronic illness, including through the use of statins, medication to

All of these could help explain the disparity in why fat consumption is up, but cardiovascular incidents are still declining.

Even in terms of diet, fat is just one macronutrient in a much more nuanced context of overall eating habits. That's why Klodas recommends focusing on whole foods, not obsessing over fat.

I don't actually advocate a low fat diet.  I advocate a whole-food plant-based diet," she said. "This is the type of diet most directly associated with healthy longevity."

Klodas said part of the confusion is driven by media and others who focus on outliers, not the broader context of nutrition advice as a whole. The best thing for most people, she said, is what food writer Michael Pollen famously recommended, with a slight twist: eat real food, not too much, mostly plants.

"If you follow this simple advice and stay true to it, you'll be fine," Klodas said.

Some keto evangelists believe vegetable oil is worse than cigarettes, but the science behind the theory doesn't add up