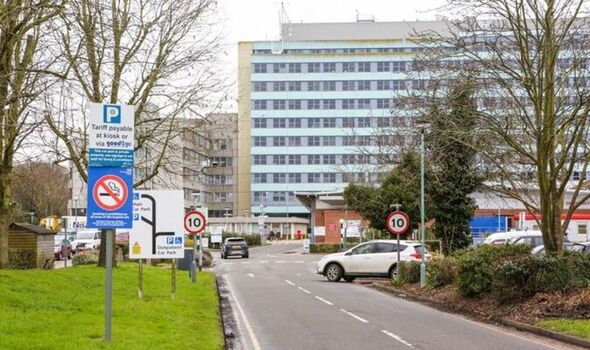 Hospital staff were eating takeaway at the time of a planned welfare visit on a vulnerable patient who had been admitted for trying to take his life, an inquest heard.

Aidan Sample had been a voluntary inpatient in Ward 12 at Pilgrim Hospital in Boston, Lincolnshire, when he was found dead at 2.30am on April 7, 2019.

The 34-year-old’s cause of death was hanging.

Mr Sample was assessed as having a moderate risk of self-harm or suicide, and staff were made to carry out observations on him every 30 minutes.

An inquest heard that a member of staff named Georgie Desmond signed the log to say she checked on Mr Sample at 12.30am on April 7 and found him asleep.

The record was countersigned by the nurse in charge of the night shift, Aaron Grayson.

However, CCTV evidence showed Mr Grayson and Miss Desmond were in the office between 12.18am and 12.44am and a food delivery had arrived between midnight and 12.30am, reports Lincolnshire Live.

Barrister Jonathan Bertram put it to Mr Grayson that based on CCTV evidence, Miss Desmond “did not leave that room at 12.30am or anywhere near 12.30am”.

He said: “It looks as if there was this delivery of food and everyone stopped working for half an hour and had a group break.

“No one went out and did their jobs.”

Mr Grayson said: “No, that’s not what happened.”

Mr Bertram asked Mr Grayson that while checks were never going to be “bang on every half an hour”, was it OK if checks were done a couple of minutes late but not 15 minutes late.

Mr Grayson confirmed the log had Miss Desmond’s name next to a 12.30am check on Mr Sample and that the signature underneath was his.

Mr Grayson was asked by Senior Coroner for Lincolnshire Paul Smith if he remembered a mutual colleague offering to do Miss Desmond’s 12.30am check for her as she ate, to which he replied in the affirmative.

Mr Smith said Miss Desmond’s signature on the log appeared to show the offer was not taken up.

The Coroner then asked Mr Grayson: “Were you aware at any stage the check at 00.30 hours for which you countersigned had not been undertaken at 12.30am?”

He added that he could not recall if he was aware Miss Desmond “remained at all times in the office”.

The court heard Mr Grayson also signed off checks on Mr Aidan at 1am, 1.30am and 2am and that he first became aware of any issue with Mr Aidan at 2.30am.

The inquest heard it had been a busy night shift at the unit and staff had more than 30 patients in their care.

Mr Sample, whose girlfriend was pregnant at the time of his death, had two children from a previous relationship.

He had a history of mental illness and self-harm and was admitted to Ward 12 on April 1.

He was initially on observation every 30 minutes but the frequency was increased to every 15 minutes following an incident he was involved in on April 2.

Various members of his family called the ward to express concerns about his presentation, the inquest heard.

On April 4, Mr Sample had ventured into Boston where he bought a bottle of rum and a Stanley knife which he hid in the grounds of the hospital and told his step-mum Philippa Bramall what he had done.

The matter was reported to the ward and Mr Sample helped staff find the items.

Mrs Bramall said she was “astounded” to be told Mr Sample could not be prevented from leaving the ward because he was not held under the Mental Health Act.

Observations of Mr Sample were reduced to every 30 minutes from 5am on April 5. The inquest continues.

Where to get help

If you are struggling with suicidal thoughts or finding things difficult, you can contact the Samaritans.

The Samaritans support people who are experiencing emotional distress.

24 hour helpline offering emotional support for people who are experiencing feelings of distress or despair, including those which may lead to suicide