Pathogen recognition is based on the presence of Toll-like receptors (TLRs), which detect pathogen-associated molecular patterns (PAMPs) to coordinate the immune cascade. These receptors are encoded in the germline and have both intra- and extra-cellular domains. Ten TLR receptor types have been found in humans, along with the microbial antigens they recognize. 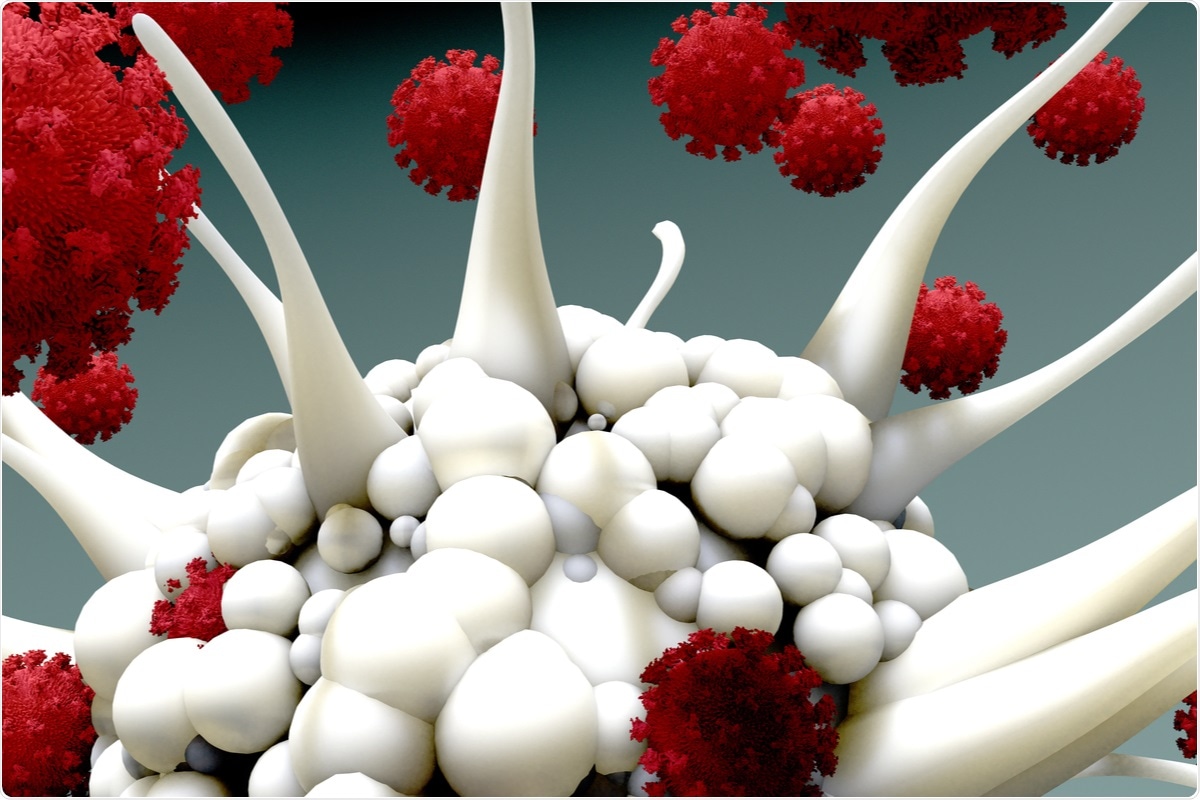 Study: Suppression of RNA Recognition by Toll-like Receptors: The Impact of Nucleoside Modification and the Evolutionary Origin of RNA. Image Credit: Design_Cells/ Shutterstock

Many viruses contain double-stranded (ds)RNA that stimulates TLR3. Human TLR8 is activated by one class of RNA oligonucleotides. TLR7, TLR8, and TLR9 are part of a subfamily due to their common sequences and structures.

The selective immune response to bacterial but not mammalian DNA is due to the difference in their chemical structure, that is, the presence of methylated cytidine in CpG motifs of DNA.

Though relatively lower in amount, mammalian tRNA is highly modified, at up to 25% of nucleosides, compared to bacterial or viral tRNA.

mRNA in bacteria is unmodified, but this is not the case with mammalian mRNA, which contains modified nucleosides. These include 5-methylcytidine (m5C), N6-methyladenosine (m6A), inosine, and many 2′-O-methylated nucleosides in addition to N7-methylguanosine (m7G).

The current study, published in the journal Immunity, explores how natural RNA modifications may alter its potential for immune activation via TLRs.

What did the study show?

The researchers found that different natural RNAs activate immune cells to different degrees. Mammalian total RNA and mRNA were stimulatory, but not tRNA, unlike bacterial tRNA.

The scientists produced selected modifications by substituting either one or two of the four nucleotide triphosphates (NTPs) in RNA by one with a modified nucleoside. They used in vitro transcription to produce the RNA.

Earlier studies show that in vitro transcription produces RNA recognized by human TLR3 and mouse TLR7. However, oligoribonucleotides (ORNs) synthesized by chemical reactions activate human TLR8 and mouse TLR7. With the modified RNA, too, TLR3 activation was confirmed with m5C, m5U, Ψ, or m5C/Ψ in the RNA, but when m6A or s2U modifications were present, no stimulation was observed.

Once the endogenous TLR3 activity was removed, they found that all of the above vitro-transcribed RNAs caused stimulation of human TLR7. Therefore, RNA is a powerful stimulant of human TLR3, TLR7, and TLR8. Conversely, modified RNA resulted in non-stimulation of TLR8.

This showed several intriguing trends. One, RNA is shown to bind human TLR7. Secondly, modified nucleosides altered the ability of RNA to stimulate the production of cytokines, such as TNF-α and IL-12, and thus their capacity to activate dendritic cells (DCs). The type of DC also alters the response to RNA.

While m6A and s2U prevented TLR3 stimulation, the presence of m5C, m5U, s2U, m6A, or Ψ failed to activate TLR7 or TLR8. Unmodified RNA activated all the TLRs mentioned here.

In other words, RNA-mediated immune stimulation is suppressed in proportion to the number of modified nucleosides present in RNA.

Bacterial RNA is more immunogenic than mammalian RNA, which has limited but detectable immunogenicity and induces interferon production. The immune response to mammalian RNA may be due to the entry of transfected RNA into the endosomes of the immune cells, enabling discrimination of self-and non-self RNA by location rather than PAMPs.

However, studies have shown that the human innate immune system can discriminate eukaryotic from prokaryotic mRNA at the molecular level and identify mRNA that lacks the characteristic poly-adenine (poly-A) tail as stimulatory. In the current study, the difference in nucleoside content contributed to the powerful immune-stimulatory effect of bacterial RNA vs. mammalian, at 0.8% vs. 3%, respectively.

Thus, nucleoside modification is a novel feature of RNA that permits recognition by the innate immune system receptors, TLR3, TLR7, and TLR8. The least-modified mitochondrial RNA in mammalian RNA probably plays a role in this effect.

In conclusion, the study demonstrates that certain natural RNAs, mammalian or bacterial, could activate human DCs, along with in vitro transcribed RNA or chemically synthesized RNAs. All of these led to the activation of cells via human TLR3, TLR7, or TLR8.

This was suppressed by RNA containing naturally modified nucleosides. This work may help understand autoimmune phenomena better, including those in which nucleic acids are involved in the disease mechanism. Moreover, these findings could help determine the role of such modifications in viral RNA and help design therapeutic modified nucleosides.