The current pandemic of coronavirus disease 2019 (COVID-19) has not only taken whole societies hostage but claimed over 2.86 million lives globally. Non-pharmaceutical interventions (NPIs) were the only weapons available against the virus's spread, without effective antiviral drugs or vaccines. 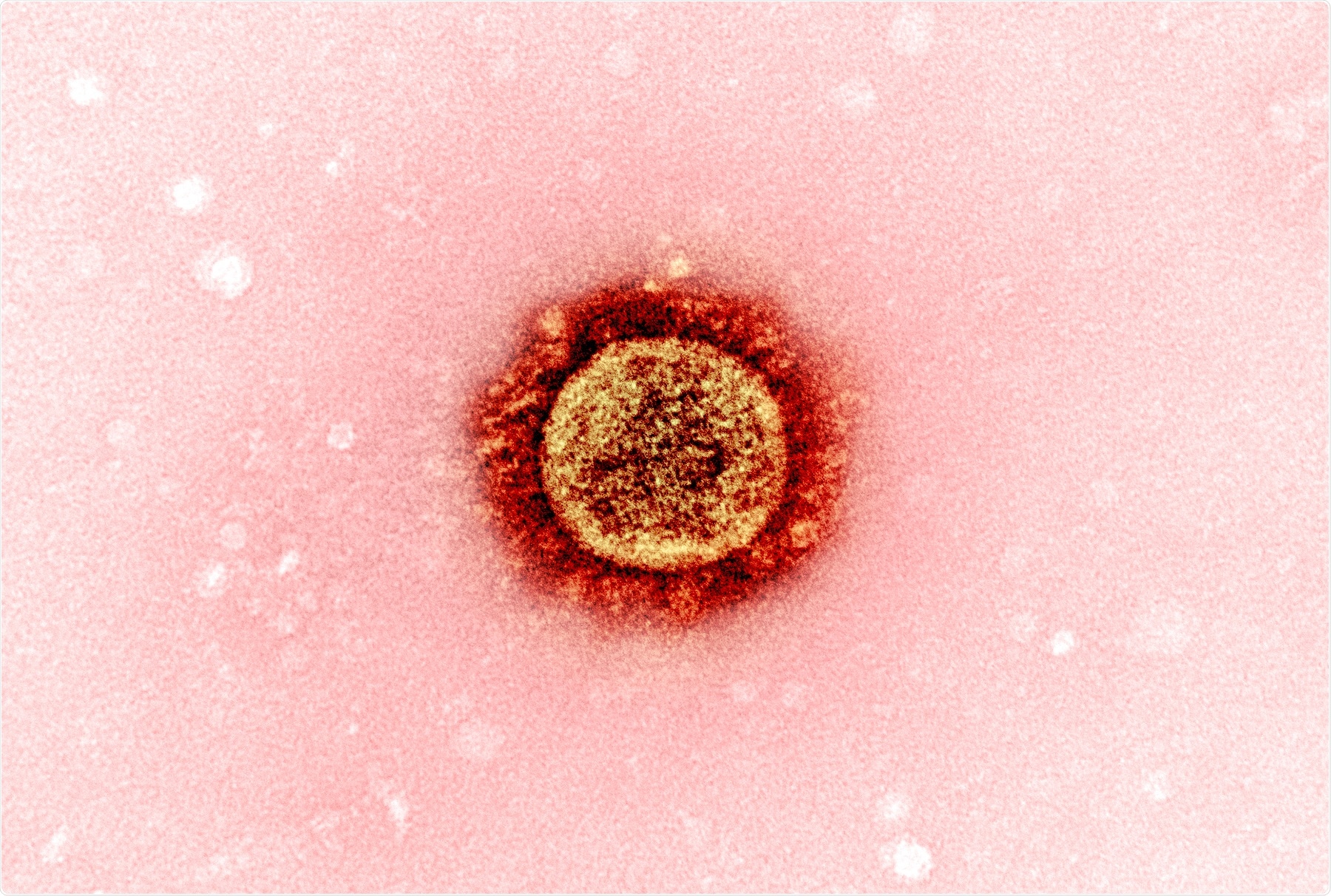 Vaccines to the fore

Now, a dozen or so vaccines have become available, mostly based on the viral spike protein. This protein engages the host cell receptor, the angiotensin-converting enzyme 2 (ACE2), and mediates the virus's entry into the cell.

The pandemic speeded up the process of vaccine development to an unprecedented period of one year. Not only are vaccines the only hope for an earlier end to the pandemic and a rebound of economic and social interactions to a more normal level, but their development has led to innovative new platforms that may play a crucial role in the production of new vaccines in the future.

The earliest vaccines to gain emergency use authorization were the Moderna and Pfizer vaccines, both messenger ribonucleic acid (mRNA) vaccines encoding the viral spike antigen for expression within the host cells. These are costly and difficult to manufacture, while the need for ultra-cold facilities constrains their storage.

Subunit protein vaccines are more stable to temperature variations, cheaper and simpler to manufacture, and easier logistics. They are also safer as they are only a part of the whole virus. This makes them the first choice in older people and those with weakened immunity. 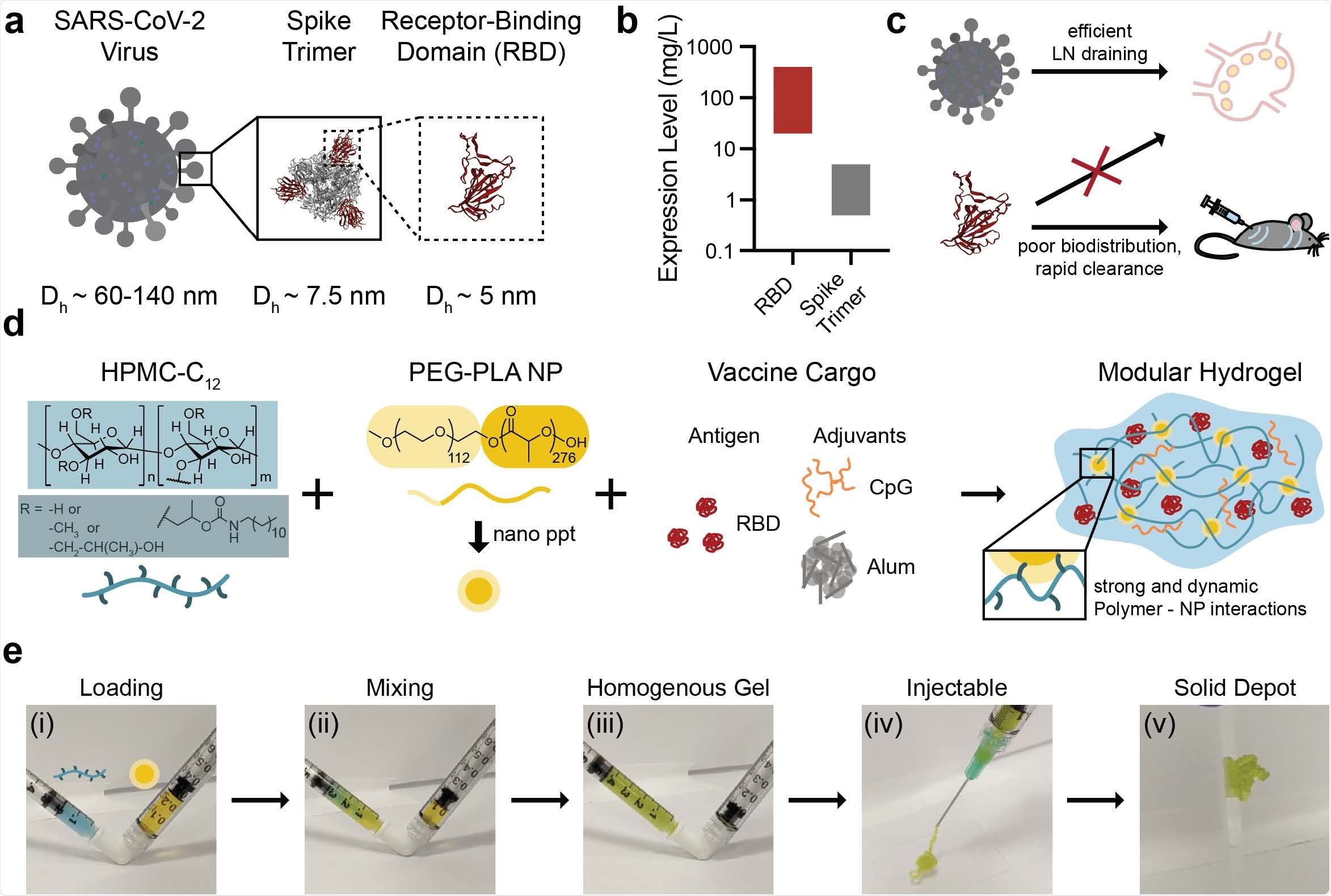 Polymer-nanoparticle (PNP) hydrogel is suitable for subcutaneous delivery of RBD and combinations of clinically de-risked adjuvants. (a) Schematic showing the entire SARS-CoV-2 virus (~40 nm), the spike trimer on its surface (~7.5 nm), and the receptor-binding domain (~5 nm) that is used as the antigen in these studies. (b) RBD expression levels greatly exceed (~100X) spike trimer expression levels. Bars show the range of expression levels found in the literature.1-3 (c) Larger 30-100 nm particles drain efficiently to lymph nodes and are retained there while smaller particles like RBD are not.4 Small, hydrophilic species like RBD suffer from poor pharmacokinetics.3 (d) Dodecyl-modified hydroxypropylmethylcellulose (HPMC-C12) is combined with poly(ethylene glycol)-b-poly(lactic acid) (PEG-PLA) and vaccine cargo (RBD, CpG, and Alum) to form PNP hydrogels. Dynamic, multivalent noncovalent interactions between the polymer and NPs lead to physical crosslinking within the hydrogel that behaves like a molecular velcro. (e) HPMC-C12 is loaded into one syringe (blue) and the NP solution and vaccine components are loaded into the other (yellow). By connecting the syringes with an elbow (i) and rapidly mixing (ii), a homogenous, solid-like gel is formed (iii). The gel is then easily injected through a 21-gauge needle (iv) before self-healing and reforming a solid depot (v) in the subcutaneous space.

The spike and the RBD

The spike protein has a receptor-binding domain (RBD) that is an attractive subunit vaccine target since it contains the actual binding interface between the virus and the receptor. The RBD is stable, and its manufacture is scalable and inexpensive. It can be expressed at a level that is a hundred times higher than the spike trimer.

The RBD is the target of numerous neutralizing antibodies and is also a rich source of T cell-binding sites in order to trigger a powerful cytotoxic T cell response. RBD-binding antibodies are more often neutralizing than those binding outside this domain.

A significant issue with the RBD is its low immunogenicity. This is because of its small size, which allows rapid dispersal through the body, and rapid clearance from the body.

The current work shows that this can be improved by a sustained exposure of the host to the antigen along with potent adjuvants, both released from a safe hydrogel.

The slow delivery of the antigen may increase the humoral immune response, up to 20-30-fold in the case of an HIV vaccine using another injectable platform. The current study used a hydrogel in which the subunit protein is kept in aqueous form.

The current experiment uses a polymer-nanoparticle (PNP) hydrogel system that can be injected, building on earlier work that demonstrates its capability for sustained antigen release and durable, strong antibody responses to adjuvanted subunit antigens.

To create the corresponding vaccine, the HPMC-C12 solution is mixed with the NP-vaccine solution, from different syringes, in an elbow connector. The resulting gel can then be injected, forming a depot at the site by self-healing.

The hydrogel stabilizes the vaccine antigen and can simulate human tissue structure. The covalent cross-links mean that they are not easily absorbed, and must therefore be implanted or else administered as complex systems that allow in situ polymerization within the host.

This restricts the number and type of compatible cargo molecules. Thus, specialized hydrogels that can be injected instead and which can release molecules over a long period have been studied.

The adjuvants most commonly used have not been adequate to enhance RBD immunogenicity in standard bolus vaccine administration, nor have they been able to provide neutralizing responses to a single dose of the RBD antigen.

Here, class B CpG and alum adjuvants were used after testing that they did not interfere with the flow properties of the hydrogel.

The alum would trap the RBD protein with the CpG inside the hydrogel to be released over nine days or so.

What were the results?

The results show that this formulation produced higher total antibody titers relative to a bolus injection of the same vaccines.

The antibody titers remained high against two common variants of the vaccine, the B.1.351 (South Africa) and B.1.1.7 (United Kingdom) lineages, with different spike RBD sequences relative to the wildtype spike, for a prolonged period. In contrast, bolus doses produced high titers, which then dropped sharply.

When tested using a lentiviral SARS-CoV-2 pseudovirus assay, the neutralizing responses to a single dose were found to be comparable to those of convalescent serum.

Initially, IgM antibodies were produced, followed by IgG. Thus, a Th2-biased or humoral immune response resulted from the use of CpG + Alum + Gel treatment. Anti-spike IgG titers were also highest in response to CpG +Alum + Gel injection, even after one dose.

The single-dose vaccine designed in this study used double the dose of all the components. When compared to the bolus prime-boost protocol, the IgG titers were above post-boost titers. They also exceeded the post-prime levels after a single dose of the earlier formulation intended to be given.

Vaccination with the CpG + Alum + Gel prime/boost protocol led to a mean 50% inhibitory concentration (IC50) that was an order of magnitude higher than that of convalescent serum antibodies. Both anti-RBD and anti-spike antibodies were increased compared to the bolus, and to other adjuvants.

One shot of the double-dosage formulation produced titers higher than the two-dose bolus group and almost as high as the two-dose hydrogel group.

The hydrogel not only allows infiltration by immune cells, exposing them to high concentrations of antigen and adjuvant but also releases the molecular cargo slowly over days, allowing for a slow but prolonged immune response. The resulting immunity far surpasses the antibody and neutralizing responses to controls, other adjuvants, and the bolus form of the formulation.

This promising vaccine surmounts many of the logistical and immunological limitations of existing vaccines, making it a good choice for wide distribution.