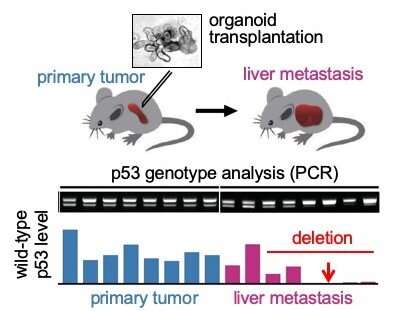 Understanding the genetic mutations and protein changes that take place in the progression of cancer is key to its treatment. Mutations in the gene TP53 and concomitant mutant p53 proteins in cancer cells have become notorious over the course of multiple studies of several different types of cancers. Yet so far, the mechanisms behind the role of these protein changes in propagating the disease has been poorly understood. Masanobu Oshima at Kanazawa University and his collaborators now report results that suggest just how these protein changes may lead to accelerated tumorigenesis and metastasis.

Previous studies of cancers in the lungs, intestines and pancreas, as well as colorectal cancer, had suggested that changes in p53 lead to invasive abilities and stem cell characteristics crucial for late-stage tumorigenesis. In addition to this ‘gain of function (GOF)’ mutation, wild-type protein p53 is reduced in cancer cells through a ‘loss of heterozygosity’ process, where instead of having two alleles for each gene corresponding to each parent, the gene has just one.

Oshima collaborated with researchers at Kanazawa University in Japan, Theragen Etex Bio Institute, and Seoul National University in South Korea. They found that tumor cells that carry GOF mutant p53 and lost wild-type p53 are enriched in liver metastasis lesions, suggesting combination of p53 LOH and GOF mutations promotes metastasis. In studies of single cells dissociated from each other, the researchers found that loss of heterozygosity was key to the cell’s survival and proliferation, which has implications for metastasis. In addition, the structures formed were more complex and glandular.

Further studies suggested that the combination of gain of function mutations and loss of heterozygosity provided some protection against cell death. When injected in live mouse models the combination also accelerated tumorigenesis as well. The tumours formed had a fibrotic microenvironment, a signature of a poor prognosis for colorectal cancer.