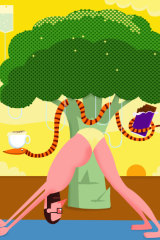 SUNDAY
I arrive at Eden Health Retreat coming down from a sugar high after eating an entire box of wrapped promotional chocolates on the flight to Coolangatta.

I had forgotten they were in my backpack and panicked that such contraband would have me thrown out on the spot. Clearly I’m not prepared for the six-night, seven-day retreat abstaining from alcohol, caffeine, phone reception and junk food.

After getting off the plane, a minivan picks me up and chauffeurs me through the gates of the property in the glorious Gold Coast hinterland. It’s like entering a gated celebrity ranch: all manicured lawns and well-maintained pavilions. A serene staff member shows me the facilities, drifting past a glistening pool and palatial gym to my neat, private cabin. “The retreat only works if you completely let go and allow yourself to be absolutely raw,” the woman says. I nod weakly.
“I’m ready to be raw!”

My fellow retreaters meet in the gym for a welcome snack: pumpkin soup with kale chips. There are 39 of us here this week – 35 women and just four men aged between 18 and 70, in all shapes and sizes – every one of us wearing expensive activewear. Two girlfriends from Melbourne talk to a mother and daughter from Sydney; the mum, Lisa, has been here six times. We discuss the therapies we’ve signed up for ($400 worth of treatments are included), and I admit I’m trying colonic hydrotherapy for the first time. Everyone raises their eyebrows. “Apparently the colonic lady
is very good,” Lisa says.

I walk up the steep hill to the dining room, which is the perfect setting for a school camp or a well-financed cult. There’s a cabinet of board games and tattered paperbacks, including several copies of Nine Perfect Strangers, the 2018 novel by Liane Moriarty, which happens to be set at a health retreat. “It’s a terrible book,” mutters a flamboyantly dressed Indian lady behind me. “Nothing like the real thing. This is my eighth visit!” After a portion-controlled dinner of roasted cauliflower, the group gathers in the lounge to hear from Chris, the camp manager. For the next six days, he explains, there will be a roster of classes, treatments and meals, but nothing is compulsory. “This week is all about you,” he says. “The only pressure comes from within.”

MONDAY
I wake up before sunrise for a session of “e-motion” yoga with a semi-famous yogi, then do a “dynamic movement G” class with a bronzed trainer who teaches us to embrace our inner primate by rolling around on the floor like chimpanzees. Later, we set off on a two-hour group bushwalk around the property, pushing swiftly past goannas and snakes lurking in the trees. I’m already knackered.

“What have you come here for?” asks Heather, a softly spoken mum from country NSW.
“To press the reset button?” I reply hopefully.

“I needed some ‘me’ time away from the kids,” she says, before lowering her voice confidentially. “I’ve found a spot on the top of the hill where you can get one bar of phone reception.”

After lunch, I have my first treatment with massage master Ahren; the signature Kahuna, described as “a spiritual journey nourishing mind, body and spirit through deep-tissue massage with breath and music”. I’m stark naked with a sarong draped over me as Ahren chants intensely, pummelling my body with his forearms. I barely know if I’m asleep or awake and almost two hours float by in a haze of massage oil, sitar music and heavy breathing. “You received the treatment very well,” Ahren says, generously, when it’s over. I feel like I’ve been given a shiny gold star.

TUESDAY
Today is traditionally rock bottom for the guests at Eden. It’s when the novelty wears off and withdrawal from your chosen vices – food, coffee, booze, tech – starts to hurt. After a breakfast of fruit and nuts I meet Di, the colonic specialist, in a small cabin set far away from wandering bushwalkers. She’s a no-nonsense Byron Bay type with an inquisitive gaze who calmly sticks a plastic tube up my bum and gets to work. I sit swathed in towels, contemplating a chart of the human colon as I’m repeatedly filled with and drained of warm water. A machine with a large glass tube displays what’s coming out of me (“Look, a rice chip!”) as Di explains what’s going on inside my gut. It’s rather uncomfortable, like having severe indigestion, but afterwards I feel like I’ve recovered from a bout of gastro, or had my teeth cleaned at the dentist: light and refreshed, albeit perhaps only temporarily.

That night, one of the old timers, Barry, takes us on a bushwalk to see the hundreds of glow-worms that glitter on the bank of a creek bed near the flying fox. Barry’s been working here since its first days as a retreat in 1985, and has seen the place evolve from hardcore boot camp, to unofficial drug rehab facility, to, these days, more of an upscale spa to bliss out at for a few days instead of going to Bali. “Why are glow-worms never glum?” Barry asks as we gaze at them. “Because the sun shines out of their bum!”

We all laugh a bit too hard. “I know the feeling,” I think grimly.

WEDNESDAY
I’m beginning to learn people’s names – there’s government worker Grant, dragged along by his super-fit girlfriend Lucy; he’s getting double meal rations from the kitchen because he complained of being hungry. Then there’s Fatima, an eccentric doctor who prowls around the fringes of the group like a cat; and Valentina, a glamorous Italian mother who declares us the best group she’s ever had here – she’s been to Eden 12 times, so she should know. “Usually there’s at least one or two know-it-alls.”

The manager, Chris, tells me the same characters arrive week after week. There are leaders and followers, loud ones hiding insecurities, quiet ones who emerge from their shells. Many are overcoming hardships, grief, loss and illness. Occasionally they’ll have a guest coming down off something stronger than Yarra Valley chardonnay, and discreetly arrange a transfer to one of the drug and alcohol rehabilitation centres in the area. It’s a hotbed of wellness around here, with rival retreats such as Gwinganna and Ananda Rainforest Spa all within cooee. Some guests will even walk a full hour to the nearest town to get a coffee fix. “I tell them, ‘Hey, you’re an adult,’ ” says Chris. “We’re not stopping you from doing anything you don’t want to do.”

THURSDAY
I leave a string of Tibetan coins on my door handle – Eden code for Do Not Disturb – and sleep through the early morning yoga class. At breakfast, everyone says I missed out. “We finished the session with Florence and the Machine’s Shake It Out,” brags Kylie, a rock band manager. “It was quite a moment.”

I feel genuinely disappointed, and resolve that from now on I will get up before 6am every day, even when I go home. Or maybe just on weekdays. Or Monday, Wednesday and Friday mornings, definitely.

FRIDAY
Mid-morning, we assemble for Eden’s marquee adventure activity: jumping off a seven-metre telegraph pole to catch a trapeze. I’m secretly terrified of heights so have been considering hiding in my cabin. But no, I decide; I’ve got this. I get harnessed up, climb quickly to the top of the pole and wobble to my feet. “Count me in!” I shout. “1 … 2 … 3!” I hurl myself off the pole and catch the bar dangling in the abyss triumphantly. The crowd below goes wild, and I’m stoked. A surge of healthy adrenaline buzzes through me for the rest of the day.

Before going to bed that night, I walk up to the dining room to fill my water bottle. There I see Graeme – an older, extravagantly out-of-shape bloke, here with his wife – standing alone admiring a 1500-piece puzzle he has just completed. “Mate, you’re glowing,” he says, glancing up with a smile. I shrug, a bit embarrassed. I do feel much, much better than I did on Sunday – a version of me that could exist if I didn’t drink pints of pale ale every weekend and eat Japanese katsu curry rice for lunch every day. I can see why people come back again and again, despite a starting price of between $3050 and $4550 for the week, depending on your room.

“Hopefully you take some of this place back home with you.”

SATURDAY
After saying farewell and swapping Instagram handles with my favourite retreaters, I board the first minivan to Gold Coast Airport. Mobiles start to beep and whistle as we enter civilisation, and one woman begins to listen to her voicemail messages on speakerphone. “You have … nine … new messages.” It sounds as harsh as heavy metal. I rummage through my backpack to retrieve my own phone and it’s only then that I see it, glinting from the very bottom of the bag: one wrapped promotional chocolate that must have escaped from the box. I take it out and turn it over in my hands. It’s still good.

Michael Harry was a guest of Eden Health Retreat.

To read more from Good Weekend magazine, visit our page at The Sydney Morning Herald, The Age and Brisbane Times.