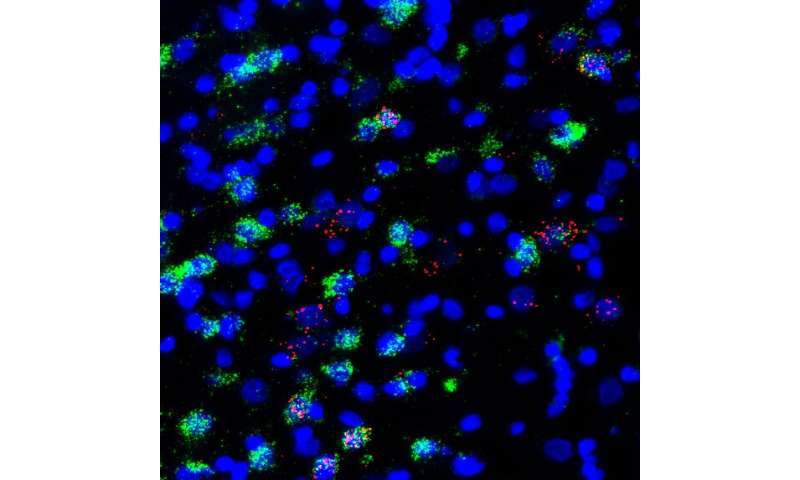 The U.S. Food and Drug Administration-approved drug liraglutide has been shown to help obese patients lose weight by suppressing their appetite. However, where and how the drug acts in the brain was not fully understood, until now. A new preclinical study from the Perelman School of Medicine at the University of Pennsylvania, published in Science Translational Medicine today, shows how liraglutide crosses the brain’s blood barrier to engage with a region of the brainstem known as the nucleus tractus solitarius (NTS), which is responsible for balancing food intake and energy expenditure. Filling this gap meets a need that has become a priority for researchers looking for new treatments to help fight the increasing rates of obesity.

Liraglutide interacts with targets called glucagon-like peptide-1 receptors (GLP-1R) in various parts of the brain to suppress hunger. This is the first study to show how a distinct group of neurons that express GLP-1Rs within the NTS of the brainstem play a key role in mediating these effects.

“This discovery opens up the door for future obesity drug treatments that could be used in conjunction with this FDA-approved therapy to treat obesity,” said senior author Matthew R. Hayes, Ph.D., an associate professor of Psychiatry at Penn. “The more we understand how drugs act, the more we can understand what other brain systems can be manipulated in combination with them to help patients lose more weight.”

Liraglutide was first approved by the FDA in 2010 to improve blood sugar levels in patients with type 2 diabetes. In late 2014, the FDA approved the drug to treat obesity after several clinical trials showed that patients on the drug lost an average of 8 percent of their body weight compared to those not on the drug. Today, five FDA-approved obesity drugs are available, but researchers are working to develop more, as the United States continues to battle rising rates of obesity. Nearly 70 percent of Americans are considered overweight or obese, according to the Centers for Disease Control and Prevention.

Liraglutide mimics a hormone known as GLP-1, which controls the amount of glucose in the body and helps regulate feeding behavior. The drug works by resisting enzymatic degradation and by activating the necessary GLP-1 receptors within the brain to help reduce a person’s appetite, subsequently producing weight loss.

Hayes’ lab focuses on ways to further exploit this hormone system. Here, the researchers used a “knockdown” adeno-associated virus technique to explore the NTS’s role in the food intake and body weight-reducing effects of liraglutide. With this approach, the team significantly reduced the expression of GLP-1Rs within the NTS of adult rats and compared them to a control group to better understand the receptor’s contribution to the effects of the drug.

The researchers also administered fluorescently labeled liraglutide to rats in order to identify the drug’s location in the brain, and visually confirmed it travels across the blood-brain barrier and shows presence in the NTS. To further investigate the cells in this region, researchers analyzed NTS tissue using an advanced technique known as fluorescence in situ hybridization (FISH) for expression of glutamate decarboxylase (Gad1) mRNA, a commonly used marker for a group of inhibitory neurons known as GABA neurons—which prevent cells in the brain from taking action.

“We’ve narrowed in on the NTS to more fully understand how this site in the brain is critically important for body weight regulation,” said first author Samantha M. Fortin, Ph.D., a postdoctoral research fellow in Hayes’ lab. “Our finding that GABA neurons in the NTS are important for the anorectic effects of liraglutide may prove to be meaningful in the future. Other compounds or genetic manipulations that would target this distinct population of cells in the brain could be useful in treating obesity.”

Hayes and his team are also investigating other GLP-1 drugs on the market and in combination with other pipeline anti-obesity drugs to see if their interaction continues to be mediated by the same GABA neurons in this region of the brainstem.