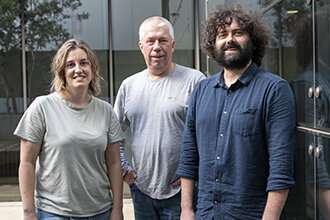 A potential new treatment for asthma that works by targeting the cause of the disease, rather than just masking its symptoms, has been revealed in a study published today in the Journal of Clinical Investigation Insight.

Preclinical findings show how a drug, currently well tolerated in clinical trials for cancer, is able to ‘switch off’ and reverse the uncontrolled inflammation responsible for driving and exacerbating asthma.

The research was led by Dr. Rhys Allan, Dr. Christine Keenan and Professor Stephen Nutt at the Walter and Eliza Hall Institute of Medical Research, along with collaborators at the University of Newcastle.

One in nine people in Australia have asthma and Melbourne has one of the highest incidences of the disease in the world.

Current asthma medicines such as airway relieving inhalers only serve to ease the symptoms of chest tightness, shortness of breath and coughing. Anti-inflammatory steroids are associated with many side-effects. And recent developments in targeted injectable therapies are very expensive. Furthermore, none of these medicines cure the disease, so new and improved options are urgently needed.

A game-changer for asthma treatment

Dr. Keenan said the team’s research could dramatically improve the future of asthma treatment because they had identified a small molecule inhibitor, or drug, that could target the cause of disease, rather than just alleviating the symptoms.

“I have been researching asthma in the preclinical setting for a long time and have never seen a treatment wipe out signs of an allergic immune response like this before. It’s exciting because these findings could be the stepping stone to developing an effective new treatment for allergic asthma,” she said.

Asthma is a long-term lung condition that currently has no cure. People with asthma react to environmental triggers such as pollen and dust mites. The uncontrolled inflammation associated with this allergic reaction restricts airways, increases mucus and makes it hard to breathe.

Dr. Allan said the researchers, who are experts in the epigenetic regulation of gene expression, set out to use their knowledge to target and arrest the cause of uncontrolled inflammation.

“Our early research identified that the enzyme Ezh2, which is an essential component of the epigenome, was critical to the immune system’s ability to drive inflammation in response to allergens. This indicated that an Ezh2 inhibitor drug could effectively suppress inflammation in an allergic response,” he said.

Through a series of laboratory studies the researchers showed that the inhibition of Ezh2 could dampen the overreaction by immune T cells that lead to uncontrolled inflammation in the lungs, as well as reverse any established inflammation associated with asthma.